So the St. Louis Cardinals fans were caught being total dicks the other day:

by Travis Waldron Posted on October 7, 2014 Updated: October 8, 2014
A group of Cardinals fans confronted Michael Brown protesters before a playoff game Monday, and the results were ugly.


Which really made this seem even dumber:

Mayor of St. Louis Responds to the Cardinals Being Called ‘Hateable’

Yes, the mayor of St. Louis, the town which elected a mayor who doesn't know the difference between "jealous" and "envious."

This was apparently written in response to a Wall St Journal article which named the St. Louis Cardinals the most "hateable" team in baseball which is absurd, because I hate the Cardinals and I can think of at least three teams I hate more than I hate them, but whatever. Let's see why the mayor thinks we may be "jealous" of St. Louis.


Ooh, "kind of a big deal!" Wat yo keep those pop-culture references current!

Thus, I feel compelled to deliver a simple message to America: We’re sorry.
Sure, we’re sorry the Cardinals have won 11 World Series championships, two since 2006. But there’s much, much more for which we owe all of you a heartfelt apology.
Indeed, we’re sorry that New York and San Francisco are 2.3 times and 1.7 times respectively more expensive to live in than the St. Louis metro area.

Okay, and I'm sorry that New York and San Francisco are 23. and 1.7 times more desirable places to live than St. Louis apparently. I mean, you know how the market works, right? If a lot of people want to live in a place, that place becomes more expensive? Supply and demand?

Oh  and also, since 2006 , the San Francisco Giants and Boston Red Sox have also won 2 Woirld Series championships apiece, so maybe it's not that big a deal?

We’re sorry for producing one of the world’s best-selling batteries (Energizer) and two of the 10 best-selling beers in the world—Budweiser and Bud Light.

Oh, I didn't realize that you produced piss water and slightly less flavorful piss water there in your fine city. Gee, I wish San Francisco had something to stack up against. . . oh, wait!


We’re sorry that the four largest metro areas in the nation lost nearly 25,000 financial-service jobs between January 2007 and September 2012, while St. Louis added more than 5,500 in the sector.

Ooh, more bankers! You must be very proud!

That guy Jon Hamm? Yeah, we’re sorry for raising him here and sending him out into the world for your entertainment delight.


Yeah, and then he went to Hollywood California so he could become an entertainer. Had he stayed in St. Louis he would have been known as that guy who performs 6 nights a week at Busch Gardens and gets laid an awful lot.

Let me just add this about that. I was born and raised in San Mateo, California. San Mateo produced Tom Brady, one of the finest quarterbacks ever to play in the NFL. And I promise you that there is absolutely no reason whatsoever that anyone should ever visit San Mateo, California unless maybe you're an insomniac looking for a cure. Having a famous accomplished person come from your town is no testament to the impressiveness of that town, especially if that person had to leave that town in order to become successfula and accomplished.

We’re sorry for our diverse community in that more Bosnians—over 60,000—call St. Louis home than anywhere outside of Bosnia.


Wow. I don't know what's sadder, the fact that Bosnians are the only people in the world who would come to St. Louis and say "yes, this place is better than the place we left, let's stay here." Or the fact that that's what you consider "diversity." Compared to this, St. Louis doesn't seem too bad!


Over 100 Languages in Houston

HOUSTON (FOX 26) -
Spanish, Vietnamese, Farsi, those are just a few of the 100 languages spoken throughout the city of Houston.


So that's what Houston fucking Texas brings to the table diversity-wise and you're going to sit thater going "a lot of our white guys come from Eastern Europe?"


And I'm sorry that you never learned proper sentence structure. Also I'm sorry to have to tell you that pretty much every city has parks, zoos, museums and golf courses. The fact that you think this is something about which to brag just makes me feel sad for you.


We’re sorry for not only being home to 18 Fortune 1000 companies, but for developing one of the most promising and fastest-growing ecosystems for startups and entrepreneurs, delivering innovations that are being used by businesses and consumers world-wide. You know, like that pesky social-media platform Twitter (St. Louisan Jack Dorsey ) or credit-card processing device Square (St. Louisan Jim McKelvey).


Again, St. Louis is a pretty big city. Having a whopping 0.18% of the Fortune One Thousand (who knew it went up to 1000? most of us stopped paying attention after 500) hardly seems like that big an accomplishment.

We’re sorry that at the 1904 World’s Fair in St. Louis, Richard Blechynden served tea with ice, thus inventing iced tea (although not the rapper/actor Ice-T).


Oh my God, that was you? Oh, I take it all back then. If I knew that you were responsible for the brilliant innovation of adding ICE to a refreshing beverage, well. . . I just don't know what we would ever have done without the brilliant inventive mind of Richard Blechynden who was born on a tea plantation IN INDIA.


We are, in fact, actually kind of sorry that our state animal is the mule, but that’s another discussion for another day. The point is that we here in the Midwest are not a boastful people.

WHAT? You have literally spent the entire column boasting about the supposed virtues of your stupid city. (And somehow forgot to mention ribs, the only thing besides baseball you seem to be good at). You've done nothing but brag in that passive-aggressive Sarah Palin "sorry, not sorry" style that is usually reserved for rebellious teens.

Geez, sorry I don't want to be Stepford wife and spit out a bunch of stupid babies! Sorry!

We’re humble and quietly go about our business, inventing the things you use every day, entertaining you, finding employment for your citizens and handing you losses on the baseball field regularly. (We’re especially sorry to Chicago.)

Don’t hate us because we’re beautiful here in St. Louis. But if you do, just know that we’re sorry. Go Cards!
--Francis G. Slay is the mayor of St. Louis. 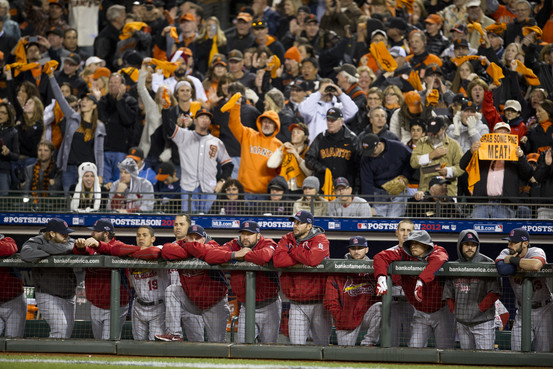 Remember this? Get used to a lot of this!

Posted by Professor Chaos at 8:33 PM 2 comments: Links to this post