Let's find fault.
Not because it's fun, or because it makes us feel good (which it might) but because if we don't identify whose fault this is, we're never going to be able to prevent a disaster like this from happening again.

(It is one of my basic rules of life that the easiest way to identify the person to blame is to look for the person who says that we shouldn't play the blame game.)

So whose fault is it that Donald Trump is now the president-elect of the United States of America?

Really, there are so many people to blame.
There's the media for treating Donald Trump as if he were a legitimate candidate who was "outspoken" and "controversial" instead of a wildly unqualified, emotionally unstable racist misogynist authoritarian - all while obsessing over e-mails.
Of course there's James Comey.
And Julian Assange.

And, sure, we can blame racism and sexism and xenophobia, but these we have always had with us, and we've elected decent candidates before.

I think that no matter what they're saying. . .

. . .  the blame for losing this election falls most squarely on Hillary Clinton herself and the Democratic Party establishment.

This was not a huge groundswell of support for Donald Trump. He got a million fewer votes than John McCain got in 2008. And two million fewer than Mitt Romney in 2012. This election should have been a cakewalk for the Democrats, but they decided to trot out pretty much the only candidate capable of losing to this buffoon, Hillary Clinton.
Yes, Hillary Clinton is eminently qualified. Yes, she's smart as hell and can speak intelligently and knowledgeably on any pretty much any relevant issue. But she has no idea how to win a national campaign.
And the Democratic Party has still, inexplicably, not learned the one simple lesson that when they nominate a candidate with charisma (Bill Clinton, Barack Obama) they win. When they nominate uncharismatic candidates (Mike Dukakis, Al Gore, John Kerry) they lose. It really is that simple. It shouldn't be, but it is. And it has been since at least Kennedy vs Nixon. And Hillary just doesn't have it. She may be a wonderful, charming bon vivant in person, I have no idea, but on a campaign stage, she just doesn't have "it." Bill has "it." He has it in spades. And you can't fake it, you can't learn it, you have to be born with it.

You know who does have "it?" Donald trump. Personally, I could never stand him. I hated him when he was just a second-rate game show host, but millions of people loved him even then. Because there is a huge segment of the population that loves a bully. Simon Cowell, Gordon Ramsey, the lady on Dance Moms, reality TV is full of them. People, for whatever reason, love to see a vulnerable person have their dreams shattered by a loudmouth who shouts insults at them. Or makes catty remarks behind their backs.

So millions of people used to tune in to watch him tell some hopeful business-school grad (or washed-up D-list celebrity) "You're Fired!" They used to sell t-shirts with "You're Fired" printed on them, because that was the viewer's favorite part.

But I digress. This isn't about Donal;d Trump. It's about Hillary Clinton and the DNC.

The reason she lost is not, as mentioned previously, because of some huge number of votes for Trump. She lost because she got around six million fewer votes than Barack Obama got in 2012. And yes, she still got more actual votes than Donald Trump, so some blame has to go to the Founding Fathers and their idea for an electoral college which was, ironically, created specifically to prevent a dangerous populist ideologue from becoming President.

And, yes, there was voter suppression. But Greg Palast, one of the top experts on the subject, estimates 1.1 million voters "purged" from the rolls, and it's not like Republicans haven't used similar techniques in previous elections.
So why did HRC get so many fewer votes? Who's to blame for this?

Well, obviously Hillary herself bears a huge part of the blame. She's always been politically tone-deaf, but her failure to even make any attempt to court Bernie Sanders' voters was just astonishingly bad politics. Knowing that the Bernie voters (and I was one)  despised Debbie Wasserman Schultz, why in the world would Hillary hire her the day she was fired as DNC chair? I get that she owed DWS a favor, but that sort of favor could easily have been re-paid after the election. Hiring Schultz seemed like an intentional middle finger to the Berniecrats, the voters who are also known as the Democratic Party Base.

And it wasn't just hiring DWS. We had a post-convention meeting of Bernie people  here in Atlanta and we heard from Bernie delegates, some who were in tears, talk about how they were shouted down at the convention, how the Clinton team passed out I'm with Her signs to block Sanders supporters from being seen by TV cameras, how completely disrespected and insulted they all felt by the treatment they received. These were the people she should have been courting. And instead she, the campaign,and the Democratic Party establishment went out of their way to alienate them.

She could have chosen a progressive firebrand as her running mate. I doubt Bernie would have done it, but maybe Elizabeth Warren, or Sherrod Brown, or Alan Grayson. But no, she chose the poster boy for the bland, corporate centrism that has been killing the party for decades, Tim Kaine. Can you even tell the difference?

And she still should have won! Because Donald Trump was a uniquely awful candidate for president. A juvenile, thin-skinned, racist, misogynist con man with more bankruptcies than ex-wives, he somehow managed to bumble his way through the Republican primary with an even lower approval rating than Hillary, seemingly handing the Presidency to the Democrats wrapped in a bow.

So why did she get so few voters to show up?

Well, the media is one obvious target for blame.  Besides giving Trump unlimited free airtime whenever he felt like picking up a phone, they fawned over him like starstruck teens. 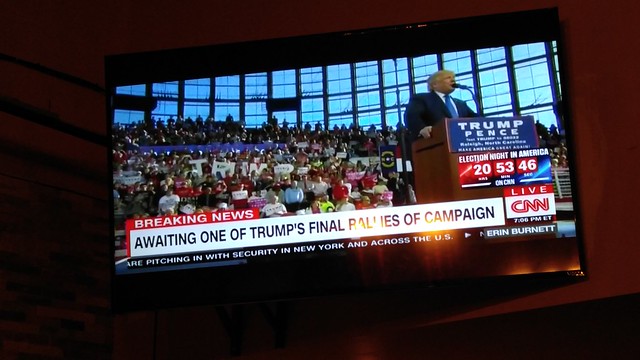 This is a picture I snapped in a restaurant on the night before the election. This is CNN, or as right-wingers and lefty Hillary-haters call it, the "Clinton News Network," They're covering, not just a Trump rally, but the "WAITING FOR A TRUMP RALLY."  I remember early on in the primaries, seeing CNN on at a different restaurant, and they were covering a Trump rally in Alabama that hadn't even begun yet, and  they were broadcasting live, getting all excited about seeing his plane approaching like he was the Beatles landing at LaGuardia. 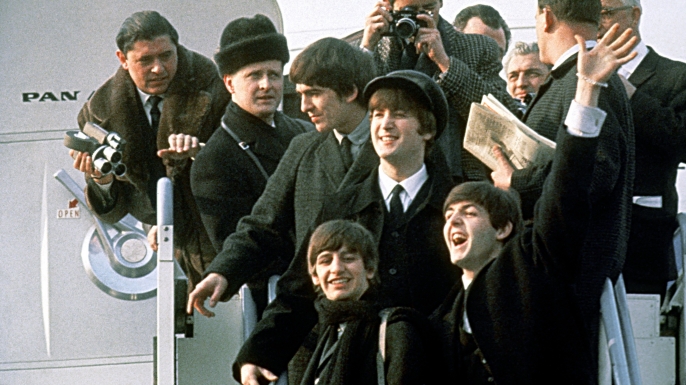 Meanwhile, they breathlessly reported on every pseudo-scandal the right could dream up about Hillary, from Benghazi to e-mail servers to some sort of cover-up about her health until a large percentage of America started to figure that if there was this much smoke, there must be some fire.

And they dutifully stood in their pens at his rallies while he riled up crowds to boo and jeer them and went back to their newsrooms and said that Trump was "outspoken." and "unconventional."

Also, I blame the #BernieorBust and #JillNotHill crowd. Not because Jill Steyn took enough votes from Clinton to swing the election, she didn't. But because these people spent the last year on social media insisting that Hillary Clinton was every bit as bad as Donald Trump, which dovetailed perfectly with the media narrative that Trump was just as legitimate a candidate as Hillary. How many people did they convince that it didn't matter which candidate won since they were both equally evil and corrupt an whatnot? How many potential "hold your nose and vote for Hillary" voters stayed home or wrote in Bernie sanders or someone else who wasn't even running anymore? How many votes against a Trump regime did we lose because these folks persisted in this myth that both parties are the same so instead of voting for the lesser of two evils, you should "vote your conscience" and "send a message" with some sort of futile protest vote? 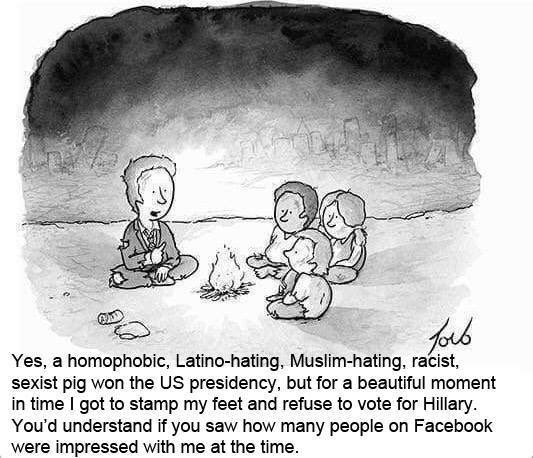 Look, I would love it if we had a third party. I'd love it if we had a bunch of parties. But we don't. And no good comes from tossing your vote to a party that not only has no chance to win now, but has no plan to be viable anytime in the foreseeable future. Jill Steyn and the Green party don't seem to have any idea what they're doing. Since Ralph Nader brought them to the national consciousness in 1996, they should have been building from the bottom up. They should have put their time effort and resources into electing some candidates on to city councils, then maybe a mayor, a Congressman, etc. By now, maybe you'd have a presidential candidate with a resume' and name recognition, instead of every four years trotting out some nobody with zero qualifications who thinks that POTUS is an entry-level position. then complaining that you're not taken seriously.

Look, when I was still in California, we had a Green Party member of the San Francisco Board of Supervisors, Matt Gonzales, who narrowly lost the race for mayor to Gavin Newsom.  This was the sort of candidate they should have gotten behind. He could have run for state assembly and maybe won with some resources behind him. From there, it's not an unimaginable leap to Congress. Or maybe Governor. But nooooo. . . .

No, instead his next campaign was as Ralph Nader's running mate in 2008, and he now works as a lawyer.  This is why we can't have viable third parties, they don't have the patience to build slowly.

But too many people wanted us to vote for Steyn, who has no qualifications and has never held public office, because Hillary was "just as bad" as Trump.

You want to hear the logic of the #NeverHillary crowd? Listen to Jimmy Dore try to convince Sam Seder that a Donald trump presidency would be preferable to a Hillary Clinton administration.


And Jimmy Dore has an audience. He has a radio show, and he's on the Young Turks. How many people listened to Jimmy Dore and decided not to vote for Hillary?


Look, I'm no fan of Hillary Clinton. She's way too cozy with Wall Street and the big banks, she's lousy on the environment, and you can't get a straight answer out of her as to whether she supports or opposes anything until she's read all the polls and held a few focus groups, but who the hell cares? The alternative was Donald Trump. And this administration is going to fuck up this country for a generation at least.
How many Supreme Court vacancies is he going to get to fill? One is too many, but it could easily be three or four. And he may not care one way or the other about social issues, but the right-wing congress and Senate do, and when they send legislation to his desk repealing the ACA or making a federal "fetal personhood" law, or a national "traditional marriage" law, he'll have no reason not to sign them. Anyone he knocks up, he'll have no problem flying off to Switzerland for an abortion. He'll always have health insurance, ACA or no ACA. And when a National "right to work" law shows up on his desk, he'll get cartoon dollar signs in his eyes as he struggles to find a pen his tiny hands can grip long enough to scrawl his signature on it.