Well, it's about goddamn time!

How the Hell did it take this long?

Pat Buchanan out indefinitely at MSNBC

Why was Pat Buchanan ever on MSNBC to begin with? I could see the scumbags at FOX trotting him out, although I would think that even they might steer clear of him in order to protect their "we're not racist, but. . ." veneer. But MSNBC? It never did make any sense. I never got why Rachel Maddow, in particular, treats him like a curmudgeonly but lovable old uncle. How is it that any legitimate outlet would keep trotting out a man who regularly says things like:

The poor homosexuals -- they have declared war upon nature, and now nature is extracting an awful retribution.
--Pat Buchanan, discussing AIDS in 1983, quoted from Political Amazon's "Quotes from Hell"


There were no politics to polarize us then, to magnify every slight. The "negroes" of Washington had their public schools, restaurants, bars, movie houses, playgrounds and churches; and we had ours.
-- Pat Buchanan, when discussing race relations in the 1950s, in Right from the Beginning, Buchanan's 1988 autobiography, quoted from Political Amazon's "Quotes from Hell"

How, then, can the feds justify favoring sons of Hispanics over sons of white Americans who fought in World War II or Vietnam?
-- Pat Buchanan, discussing affirmative action, January 23, 1995, quoted from Political Amazon's "Quotes from Hell"

Hitler's success was not based on his extraordinary gifts alone. His genius was an intuitive sense of the mushiness, the character flaws, the weakness masquerading as morality that was in the hearts of the statesmen who stood in his path.
-- Pat Buchanan, in a 1977 column, The Guardian, January 14, 1992, quoted from Political Amazon's "Quotes from Hell"
Rail as they will about "discrimination," women are simply not endowed by nature with the same measures of single-minded ambition and the will to succeed in the fiercely competitive world of Western capitalism.
-- Pat Buchanan, November 22, 1983, quoted from Political Amazon's "Quotes from Hell"
(all quotes VIA) 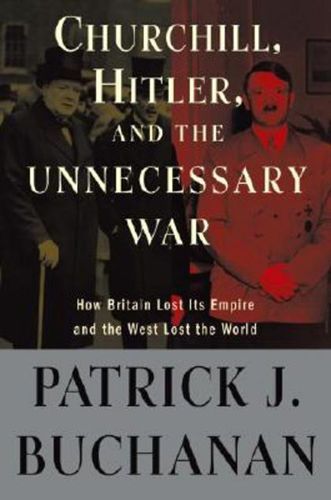 Also this.
Somehow, MSNBC has felt okay about putting this man on its airwaves for years.

MSNBC’s Griffin apparently believes, however, that Buchanan’s newest work
has crossed a line.

Ohhhhh. Crossed a line. Where exactly was this line, because it seems like Buchanan hasn't seen that line in the rearview mirror for about a hundred miles.
So, apparently this "line" is situated somewhere between "I think [Barack Obama]'s affirmative action all the way." and "Those who believe the rise to power of an Obama rainbow coalition of peoples of color means the whites who helped to engineer it will steer it are deluding themselves. The whites may discover what it is like to ride in the back of the bus."

Apparently, what it took for MSNBC to finally admit that Buchanan is a racist embarrassment to their network was for Pat to publish an entire book of his paranoid white-supremacist nightmares, and then for the "Color of Change" folks to spend like a year bringing this to their attention until they could finally deny it no longer.

The network executive said that there has been no decision as to whether Buchanan will be allowed at any point to re-join the network’s political team.

Which is sort of like an oncologist saying that he hasn't yet decided whether or not to put the tumor back in.

Posted by Professor Chaos at 7:12 PM No comments: Links to this post