Why there is no "White History Month"

It never fails. Every February some whiny smart-ass will complain that there's a black history month so how come there isn't a white history month? 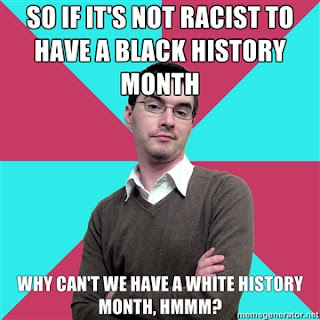 It reminds me of the time in every smartass kid's life when he says to his mom, "there's a Mother's Day and a Father's Day, how come there's no Children's Day?" And the mother answers "Because every day is Children's Day." And at the time you feel like

But eventually you grow up and looking back you realize that, yeah, being a kid was a pretty sweet deal.
Apparently, these people never grew up: http://wheniswhitehistorymonth.tumblr.com/
Posted by Professor Chaos at 11:07 PM 1 comment:

Rick Santorum Has No Sense of Irony

If there's one thing Rick Santorum can't stand, it's the government making peoples' decisions for them!


Now, if you'll excuse me, I'm off to make sure that women don't get to make their own reproductive decisions. Obviously, the government needs to decide whether you can have birth control or get an abortion.

You know, be careful what you wish for, Religious Right. You wanted a president that would govern by traditional Christian rules, you just might get one. But guess what, suckers, those rules are gonnabe Catholic. Say goodbye to birth control, and get ready to add on to your house, 'cause you're gonna need another nursery!


One of the things I will talk about that no president has talked about before is I think the dangers of contraception in this country, the whole sexual libertine idea... It's not okay

I don’t think it works. I think it’s harmful to women. I think it’s harmful to our society to have a society that says that sex outside of marriage is something that should be encouraged or tolerated …, particularly among the young and it has I think we’ve seen very, very harmful long-term consequences to the society. Birth control to me enables that and I don’t think it’s  a healthy thing for our country.”  [emphasis added]

And of course, this exchange with Jake Tapper:

Tapper asked, “Democrats say that one of the reasons you lost that year was because you are, in their view, out of the mainstream. . . about whether or not a state has the right to make a law against married couples using contraceptives. Is that something you’re at all concerned about?

It should be up to "the people" to decide whether or not you have rights. The Supreme Court should not go around handing out rights willy-nilly. Of course states should be allowed to ban birth control.

And this is no longer a hypothetical situation. Several states are introducing "fetal personhood" bills which would, among other things, outlaw the Pill. Santorum would support these insane laws. And if you think you can count on the Supreme Court to overturn laws banning birth control, there are 2 problems with that.

1: This is the worst Supreme Court in history, and the ideologues who gave us Bush v. Gore and Citizens United also happen to all be Catholic.

2: Rick Santorum seems to think that he can "overturn" Supreme Court decisions anyway.

“I would do the same thing I would with Roe v. Wade, which I would seek to try and overturn it. I think judicial tyranny is a serious issue in this race and this country. And we need judges who respect the people’s voice. Let the people decide with respect to what the constitution says, if in fact they would go through a constitutional amendment process.”