PREGAME:
* What the fuck, Micheal Douglas? Are you really putting a football game in the same category with 9/11, the March on Washington and landing on the moon? I thought that 9/11 in particular had given us a little sense of perspective about what is and is not important, but I guess you didn't get the memo.


*  America the Beautiful by some girl from Glee? Really? It's not enough that we have to sit through Christina Aguilera singing the National Anthem, we have to put up with two rounds of  oversung patriotic treacle just so FOX can promote the most unwatchable show on Television?

*  Did Christina Aguilerra just sing "twilight's last REAMING?" Also, didn't Christina Aguilerra used to be a decent singer? I only know the "I am Beautiful" song, but it seems to me that she had a pretty good voice. How did she get to be a big star singing like that? 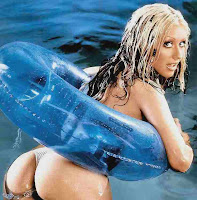 
Commercials:
*  On a day that is notorious for being the worst day of the year for domestic violence, we get a Pepsi ad with a woman being knocked unconscious for laughs, Rosanne getting knocked over by a tree trunk for giggles, and a baby thrown against a wall for yucks? How is any of that appropriate?

*  You know what else isn't funny? Hurting dogs. Although, really, did anyone not see the ending of this ad coming a mile away? There are only two possible endings in this template. Either the dog knocks over the door, landing on the obnoxious idiot, or an even dumber guy crashes into the door trying to get the chip. (It's funny because he fell for the trap that was set for the dog! Brilliant!)

And nice pet-owner, by the way. "Babe, don't hurt my dog" is all you can manage before going back to your magazine? Do you not even notice that this asshole doesn't stop? He's still trying to get the dog to crash into the patio door, but you don't seem to care. I guess if you're letting yourself be defiled by someone like this obnoxious moron, maybe you do have to stop caring about anything.

*  I still don't understand what it is that "GoDaddy.com" does, which makes it that much easier to have nothing to do with them. And Danica Patrick has no self-respect. This is an extremely talented woman who has apparently decided, fuck it, I'll just get paid for T&A.

Halftime:
*  Hmm, what could be worse than Black Eyed Peas? Oh, Black Eyed Peas featuring Usher!
*  Has there ever been a more charmless performer than "Fergie"? And where did she get that outfit? Did Ace Frehley have a garage sale? 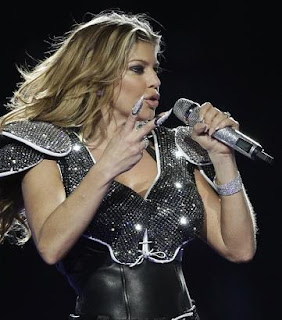 And Will-I-Am, was he auditioning for Starlight Express?

And the one with the long hair, I don't know his name, but doesn't he just look like the sort of guy you'd have a hard time not punching in the face? Like if you spent two minutes with this guy you'd have to restrain yourself.

During the Game Itself:

*  I think Heinz Ward has a tatoo of Mickey Mouse striking the Heisman pose. 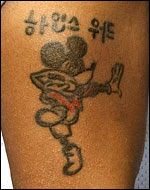 Yep, that's what it is all right. That is so cool!