Credit where credit is not due

So the new Congress met for the first time and the first thing they decided to do was to gut the office of Congressional Ethics, because it might tend to interfere a little bit with their grift 'n' graft approach to governing. When the news broke, thousands of angry citizens flooded the Congressional switchboard demanding that their representatives not make such a blatantly pro-corruption move. And the GOP backed down. So, yea! Democracy in action! The system works! The representatives of the people actually responded to the people they represent. Everyone's a winner and drinks are on the house!

But, little noticed among the hailstorm of angry phone calls and e-mails from the citizenry was a pair of Tweets from Il Douche criticizing (sorta) the move against oversight. Little noticed by everyone, it seems, except the Washington press corps who rushed to credit Putin's pet orangutan with having forced this Congressional change of course.

House Republicans back off gutting ethics watchdog after backlash from Trump

Here's an especially egregious example from the once-respected Washington Post:

Even when Trump shows backbone, his haters refuse to give him any credit

THE BIG IDEA: It took grit and gumption for Donald Trump to call out House Republicans yesterday.


With all that Congress has to work on, do they really have to make the weakening of the Independent Ethics Watchdog, as unfair as it
— Donald J. Trump (@realDonaldTrump) January 3, 2017

........may be, their number one act and priority. Focus on tax reform, healthcare and so many other things of far greater importance! #DTS
— Donald J. Trump (@realDonaldTrump) January 3, 2017


He's not exactly "calling them out." He's not even asking or suggesting that they reverse course on this. He certainly isn't saying it's a bad idea. He's just saying that maybe some other terrible destructive ideas might be a little more urgent?

And secondly, how much "grit and gumption" would it take for Trump to call out these cowards? 99% of them couldn't even bring themselves to criticize him during the campaign. How many of these craven, spineless weaklings even withheld their endorsements? For Fuck sake, Paul Ryan, the leader of the Hose Repubs tried to have it both ways, saying that "sure, obviously Trump is a horrible racist, but that doesn't mean I don't endorse him! Maybe I do, maybe I don't! Oh, he won? Yes, then I heartily endorse this wonderful man."

Maybe he did not fully comprehend the risks of criticizing the very lawmakers whom he needs most to advance his agenda, but two tweets from the president-elect were pivotal to saving the Office of Congressional Ethics from being declawed and neutered.

And "the very lawmakers whom he needs most to advance his agenda?" What agenda? He has no agenda! "Making America great again" is not an agenda. What agenda items do you think he has in his day planner that Congressional Republicans would have to be cajoled into supporting? Deporting all the Mexicans? They've all campaigned on that plan for years now. And it's not going to happen. Build a wall? Not going to happen. Muslim registry? Might happen, but the House GOP won't exactly need to have their arms twisted to go along with that program.

Other than that, what grand plans does he have that he will need Congress for? "bomb the shit out of them" and "start targeting their families" are both foreign policy atrocities that he could enact on his own. He has no agenda because he has no interest in governing. The Republican House and Senate will be sending him legislation copied from David Koch's vision board onto ALEC stationery, and he's going to shrug, say "sure, what the hell," and sign it. (probably after having Omarossa skim through it to be sure there aren't any cracks about his tiny hands hidden in there.)


Oh, and his two Tweets were "pivotal to saving the office?" Says who? You have any evidence of that? Has any member of Congress come out and said "I was totally going to go along with gutting the ethics office until I saw those two Tweets?"


A few Republicans claimed that Trump had nothing to do with the decision to scuttle the change. Liberal writers cited them as evidence. But of course they would say this. Who wants to publicly acknowledge that they just kowtowed to Trump?

OhmyGOD!
So not only do you not have any evidence that Trump's Tweets had any effect, you actually have some evidence that they did not, but that evidence can be dismissed because. . . um . . . why? Because it contradicts your narrative?And why would a GOP congressman have any problem admitting that he had deferred to the president-elect and putative leader of his party? Seems like that would be kinda standard practice.

As Senate Minority Leader Chuck Schumer (D-N.Y.) told CNN in an interview that aired last night, “The only way we're going to work with him is if he moves completely in our direction and abandons his Republican colleagues.”
Think about how Schumer would have responded if Mitch McConnell made that statement about a President-elect Hillary Clinton

Well, we don't really have to imagine, do we? Because Mitch McConnell is on record as saying that his main objective was to so obstruct President Obama that he would be a one-term President. And as having said that the proudest moment of his career was flat-out refusing to even consider anyone that President Obama nominated to the Supreme Court. I don't recall Chuck Schumer throwing a fit over either of these statements, much to his eternal shame.


-- There really is something to the idea of “Trump Derangement Syndrome.” He operates so far outside the norms of how business has always been done in Washington, and his manner seems so gauche, that he provokes a visceral, occasionally irrational, reaction in serious, normally sober-minded people.


No, there really isn't. I mean the level of projection here. . . You want to see "derangement syndrome?" Take a look back at the reaction to a black man being elected President.

Obama hadn't even had time to do anything before these asses were dressing up like Paul revere and demanding "their" country back. That's what derangement looks like.

People are opposed to Donald Trump? Good. What's so deranged about that? Because I tell you what, people's opposition to Orange Julius Caesar has nothing to do with his gauchity or his acting "outside the norms." It has to do with the fact that he demonizes Mexicans as criminals and rapists. And that he wants to identify, register, and monitor those Americans of the Muslim faith. And that he brags about getting away with sexual assault. And that he has no idea what is involved in governence. And that he seems intent on using the Presidency to enrich himself and get revenge on his enemies. And that he is completely unsuited in every way to hold any position of responsibility, especially the highest office in the land.

Oh, and also the fact that he was endorsed by the Ku Klux Klan, David Duke, the American Nazi Party, and every other white supremacist organization in the country and never refused their endorsements or denounced them or even really tried to distance himself from them. Hell, he made one of them his chief of staff. But sure, opposition to Trump is obviously "visceral" and "irrational." Just like opposition to an illegal war in Iraq was evidence of "Bush derangement syndrome." 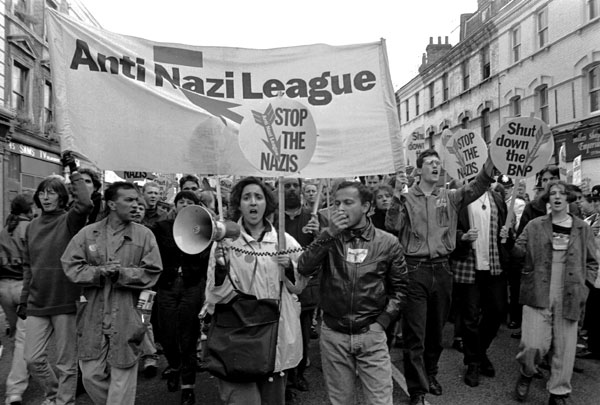 Look at all this Hitler Derangement Syndrome!