I did not doctor that. The headline totally reads: Will Humans Eventually All Look Like Brazilians?

I, for one, am looking forward to my new look!

The article starts off with a weird, creepy story  that is decidedly not Brazilian:

It really happened: Six generations of inbreeding spanning the years 1800 to 1960 caused an isolated population of humans living in the hills of Kentucky to become blue-skinned.

Apparently, this is a real thing, because I found this picture on Google images:

Hahahaha, just kidding. I found this one:

Yes, the blue-skinned product of 100 years of incest has a girlfriend.
In Kentucky, he's considered a "catch!"

Dennis Stacy, whose great-great-grandfather on both his mother's and father's sides was the same person — Henley Fugate — offered a simple explanation for the rampant interbreeding: In the old days in eastern Kentucky, Stacy said, "There was no roads."

Yeah, I don't care how many roads there weren't, I'd hike through every holler in Kentucky in my bare feet before I'd marry my fuckin' aunt!
Seriously, at least one guy married his aunt:

The hematologists' attempt to trace the history of the mutant gene revealed a gnarly Fugate family tree, contorted by many an intermarriage between first cousins, aunts and nephews, and the like over the generations.

According to Stephen Stearns, a Yale professor of ecology and evolutionary biology, before the invention of the bicycle, the average distance between the birthplaces of spouses in England was 1 mile (1.6 kilometers).

Bicycles? Before bicycles? It seems to me that the pre-bicycle world had a pretty decent method of transportation that would take a young, single fella to where non-related women lived.

So, anyway, what does this have to do with us all turning Brazilian?

Stearns says globalization, immigration, cultural diffusion and the ease of modern travel will gradually homogenize the human population, averaging out more and more people's traits. Because recessive traits depend on two copies of the same gene pairing up in order to get expressed, these traits will express themselves more rarely, and dominant traits will become the norm. In short, blue skin is out. Brown skin is in.

Except that most people tend to pair up with someone of the same race. No matter how much immigration and globalization there is, no one is requiring people to intermarry.

Already in the United States, another recessive trait, blue eyes, has grown far less common. A 2002 study by the epidemiologists Mark Grant and Diane Lauderdale found that only 1 in 6 non-Hispanic white Americans has blue eyes, down from more than half of the U.S. white population being blue-eyed just 100 years ago.

And so the logical next step is. . . Brazilians! 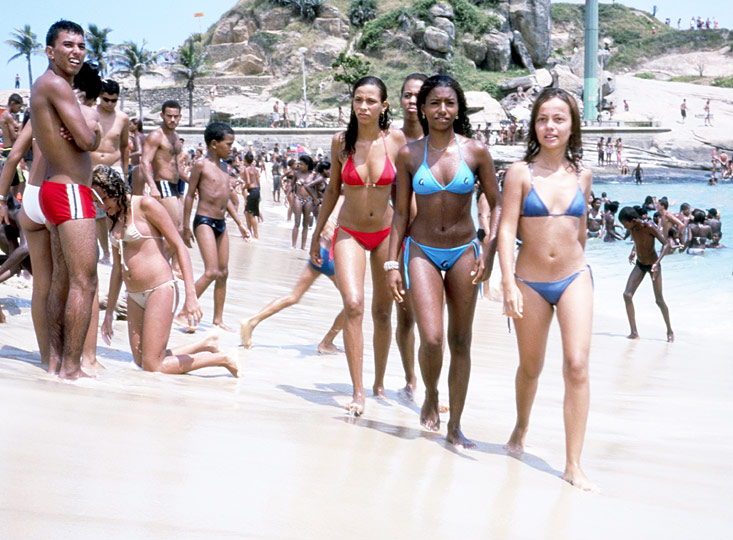 Although, based on this scientific sample, no two Brazilians even look like the same ethnicity.
I see at least 5 different skin colors in this picture of Ipanema.

A population forged from the long-term mixing of Africans, Native Americans and Europeans serves as an archetype for the future of humanity, Stearns said: A few centuries from now, we're all going to look like Brazilians.

Well, I think it's great. Maybe we'll finally be able to win a World Cup!

Posted by Professor Chaos at 9:42 PM 4 comments: Links to this post

Musician David Bromberg turns 69 years old today. An amazing guitarist and underrated vocalist. I don't remember how I initially stumbled on to his records, but I do remember seeing him about 20 years ago at the Great American Music Hall in San Francisco, and he did one of the best shows I've ever seen. Anyway, if you're not already familiar with Mr. Bromberg, you're welcome!