I don't know who these folks are who are acting out this section of Bobby Jindals' memoir, but that's really the least of my questions.


I guess my first question would be: someone in your little group has a seizure and NO ONE calls an ambulance? The head weirdo says "c'mon everyone, lay hands on her" and nobody says "sure, as soon as I'm done dialing 911."
Question # 2: What's with the fat guy scat-singing during prayer time? I'm sure he would claim to be "speaking in tongues" but I'm pretty sure he's just imitating what he thinks Hebrew sounds like. And while we're on the subject, in the New Testament, when the disciples start "speaking in tongues," everyone in the area heard them in their own language.


Acts 2: 6 -- the multitude came together, and were confounded, because that every man heard them speak in his own language.
7 And they were all amazed and marvelled, saying one to another, Behold, are not all these which speak Galilaeans?
8 And how hear we every man in our own tongue, wherein we were born?


So how is it that whenever these nuts supposedly "speak in tongues," it's just gibberish that no one understands?

If you want to speak gobbeldygook and say that it's some sort of sign of how godly you are or whatever, that's certainly your right, but it seems pretty stupid to call it "speaking in tongues." 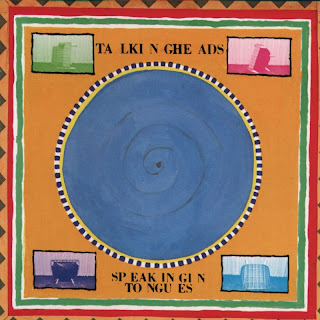 Question # 3: Shouldn't the Devil be more adept at bad language? At some point the possessed girl says something like "you buzzkills are boring me to death!" Also I believe she says "eat my farts!"  I'm pretty sure the devil would be capable of more scathing language than that.

Ask her, she can give you a few tips. You mother-fucking cunts!

Question # 4: Do they really think that flatulence signals the presence of the devil? "Oh, my God, her gas smells like sulfur!" Um, so does everyone else's.
One year when I was a kid, there was one Easter egg that my dad hid so well that no one found it for weeks. If these people had been there, they would have thought the entire backyard was possessed.

Question # 5: A "Rival Christian Group?" How are there rival Christian groups on this campus? "Let's all pray together now." "Hey can we pray with you?" "Fuck you, heretics! Your position on tras-substanciation is totally bullshit!" 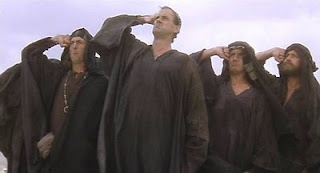 Fuck you, we're the People's Front of Judea!

Question # 6: So, if I'm getting this correctly, the lesson here is that if you have cancer, your best bet is to get yourself possessed by the Devil, because after the possession, the doctors found zero cancer cells? No need to waste your money on expensive medicines and surgery, just go Linda Blair and boom! Cancer gone!

Or is the lesson that Bobby Jindal is a nut? Yeah, maybe that's the real lesson.
Posted by Professor Chaos at 8:12 PM 4 comments: