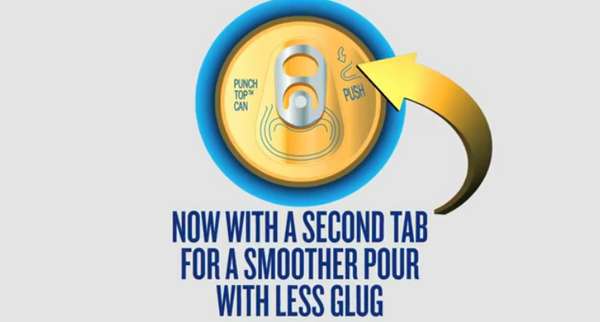 Because, yeah, that's what the problem was with your product, the pour wasn't smooth enough.
Just as the Belgians have a different glass for each style of beer, so Americans who buy mass-produced light beer in a can demand a specific pouring method for every variety of watered-down swill.

Oh, and you have to come up with some sort of tool to pop open the extra hole? Oh, that's convenient! But I suppose any amount of effort would be worth it  for the smooth pour that makes your leftover dog-dish water so very nearly drinkable.
Are people falling for this? Are people actually buying this horrible, horrible product because the can has an extra opening?
God, that would be depressing!
Posted by Professor Chaos at 7:24 PM No comments: Links to this post

Our hotel in Asheville had copies of the local paper which included this story:


Which doesn't necessarily seem like a crazy story, I assume it was an accident, probably no harm meant.
But then there's this:


Censured? For apologizing? What the hell? You do something wrong, you apologize. Didn't we all learn that as children?

Alderman Bob Scott tried to secure an official apology to the tribe, but he was voted down. The Board of Aldermen then voted, with Scott opposing, to issue no apology.


These pathetic little pricks not only won't apologize, they are taking the time and effort to prevent anyone else from apologizing? What is wrong with these people?


“I do not feel that we did anything disrespectful to the Indian mound,” said Alderman Sissy Pattillo, according to minutes of that meeting. “I am hurt that these accusations are being thrown around.”

And he says "Oh, I'm not familiar with the customs of your religion, is this offensive?" and you say "Hell yes, it is and dammit, you made me say Hell in church!" And then he refuses to apologize and he says "I don't need to apologize, I didn't do anything disrespectful." Would you be okay with that?


Mayor Joe Collins sent a letter to the tribe on town stationary offering his personal apology, but members of the town’s board censured him for speaking without their permission.


Unbelievable! These people are children! What is so terrible about apologizing? If you step on someone's foot, you apologize. It doesn't matter that you didn't mean to step on his foot, you just apologize and get on with your life. What happened to basic common decency? When did usual societal niceties become controversial? It's like these people all watched "She Wore a Yellow Ribbon" a million times and they're all channeling Captain Brittles. Grow the fuck up, city council of Franklin, NC!
Posted by Professor Chaos at 7:03 PM No comments: Links to this post