Douche quote of the day


When asked if he felt embarrassed about his new contract paying him more per day than mosr Americans make per year, Giancarlo Stanton said this: 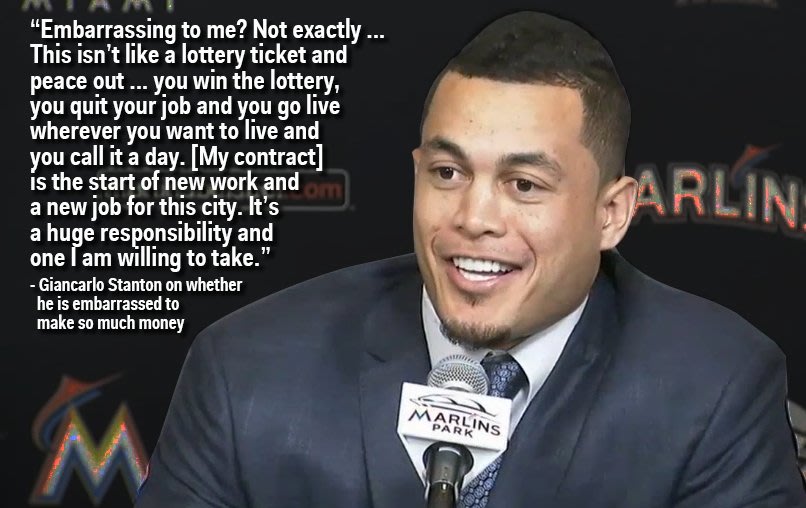 You play a game for a living.

What you do is not really "work."  it is certainly not a "huge responsibility."

This is what a job with "huge responsibility" looks like: Of course, Stanton's answer may be less douchey than the headline under which it appeared:

Like that was the best possible answer he could have given. There is just no imaginable scenario in which a ballplayer comes up with a better justification for his obscene salary than "um, I do work!" Bullseye, motherfucker!

So why does Business Insider's Cork Gaines (wait. . .Cork? really?) think this was such a spot-on perfect answer?


What Stanton did not point out is that a lot of work went into getting to where he is. While many Americans work hard, Stanton happens to do it in an industry with a lot of money and he does it as well as anybody else in the world.

Yeah, it totally makes sense that someone who works hard and excels at a sports game should be paid as much ad, oh, say 500 people who work hard and excel at, say, putting their lives on the line in service to their country? Or educating the next generation? Or building our nation's infrastructure?


So, at Stanton's press conference to announce the contract signing, one reporter asked the slugger if he was embarrassed to make more in one day ($69,000 on average throughout the contract) than most Americans make in an entire year.
Showing why he is this country's next superstar that is more than just a great ballplayer, Stanton kept his poise, smiled, and delivered the perfect answer, noting that this contract "isn't like a lottery ticket."

Wow, I mean if you could keep your poise under those circumstances. . . being asked about the millions and m,illions of dollars you're going to be paid, I mean most of us would probably collapse weeping or throw a chair Bobby Knight style if someone asked us about our newly acquired vast fortune. But he actually managed to smile and say words? Posted by Professor Chaos at 8:22 PM 4 comments: Links to this post