This is just adorable!

It's just adorable how Sarah Palin thinks that anyone is still taking her seriously!


I just want to pat her on the head and say "very good, Sarah! You're a big helper!"


Also, she forgot to pretend that teabagging rallies are "grass-roots." 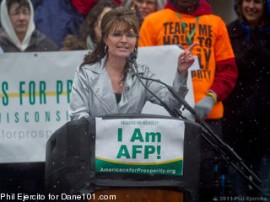 Yeah, you are Americans For Prosperity, we know.
Posted by Professor Chaos at 6:02 PM No comments: Links to this post

When I first heard about Michigan Governor Rick Snyder's "Financial Martial Law" , I thought there was no way they would actually try to use it. I figured they'd use it as a threat to get municipalities to do what they wanted, threaten to take them over if they didn't fall in line, but there was no way they would actually do it, mainly because I can't imagine this law surviving a challenge in the courts.


GRAND RAPIDS, Mich. - In one of his first acts under the new Emergency Financial Management law, which critics have described as a financial dictator law, Michigan's Republican Gov. Rick Snyder stripped the people of Benton Harbor, Mich., of their voting rights and their elected officials last week.

I'm waiting to see how many teabaggers show up to protest against this particular bit of tyranny.  Hmm, none yet. Still waiting. . .Oh, here come a couple!

No, they think healthcare reform is tyranny, an entire city being ruled by one man with virtually un-checked power? That's apparently fine, I guess.
Oh, what about her?

No, she's upset that elected officials tried to govern according to the principle of majority rule.
So no, no teabaggers seem to be at all concerned about this gross overreach of power by Michigan's scumbag governor.
So why did Snyder decide he had to take over the city of Benton Harbor?

MSNBC's Rachel Maddow reported that Snyder's emergency powers law allowed Harris to take the city's attractive lakefront public land and give it to a group known as Harbor Shores, which has been linked to the local Rep. Fred Upton, a high-ranking Republican leader in the House of Representatives.

Basically, it seems that they want to seize the town's public beach and give it to a developer to build a private golf course/housing tract. Watch the clip from the Rachel Maddow Show below for the full story.

So, yeah, congratulations teabaggers of Michigan! This is the guy you put in charge! Way to go.


Visit msnbc.com for breaking news, world news, and news about the economy
Posted by Professor Chaos at 5:25 PM 2 comments: Links to this post