This Is Who They Are

Quit distracting me! I'm trying to destroy a state here!

Haley explained these vetoes in the Department of Health and Environmental Control budget by writing, "Each of these lines attempts to serve a portion of our population for which we extend our sympathy and encouragement, but nevertheless, it is only a small portion of South Carolina's chronically ill or abused. Overall, these special add-on lines distract from the agency's broader mission of protecting South Carolina's public health."

(emphasis added. By me.)

Oh. I see. Victims of rape and abuse don't make up a particularly large voting bloc? So who cares about them?

This is your Tea-Party, America. This is who they are. They do not care about anything except enacting policies to further enrich the already wealthy or damage government's ability to do anything positive. Trying to prevent rape and domestic violence? That's just a "distraction."

Mitt Doesn't Get It

I know this story is a couple weeks old, but I've been busy.

Seriously? Do you really not get that that is so much worse?

"Outsourcing" is not necessarily a bad thing (although it usually is). If you are, say, a clothing store, and you need a computer program to track inventory, it makes sense to "outsource" that job to a company that creates software rather than trying to hire your own computer programmers who will be unnecessary once the program is written, or hoping that one of your sales staff might have a knack for computers. Outsourcing a job that is not in your company's wheelhouse makes perfect sense.

"Offshoring" is always always always a bad thing. Sending jobs to a some low-wage third-world company so you can pay slave wages to children working in prison-level conditions rather than hiring Americans who might expect a halfway-decent wage? Always bad. There's no situation in which you can justify that. 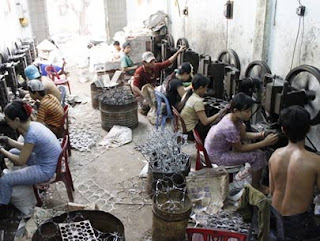 And yes, "outsourcing" is often done for nefarious reasons, like shifting work to a non-union shop, but it doesn't always have to be villainous. “This is a fundamentally flawed story that does not differentiate between domestic outsourcing versus offshoring nor versus work done overseas to support U.S. exports. Mitt Romney spent 25 years in the real world economy so he understands why jobs come and they go,” Romney spokeswoman Andrea Saul said.


Of course he understands why they go. They go because you send them to China.

Posted by Professor Chaos at 9:41 PM No comments:

She was also one of the creators of Air America, and the person who discovered Rachel Maddow.


Posted by Professor Chaos at 9:08 PM No comments: