The Sarah Palin backlash, that is. That's what's beginning.

This just in from the Values Voters Circle Jerk or whatever they call it, where Palin did not show up because she was attending a taping of Dancing With the Washed-Up Has-Beens:

[Family Research Council President Tony] Perkins, in a bit of candor that some conservative leaders don’t always voice, called Palin “a great spokesman” and added that "she says what a lot of people think."

"But you know a lot of people sometimes realize we shouldn't say everything we think," he continued. "Maybe it is that she is more of a cheerleader and one who rallies conservatives together as opposed maybe to being their top choice for president."

More from the Values Voters Slumber Party or whatever:

The annual Straw Poll of dedicated theocratic nutball voters showed Mike Pence as the crowd favorite potential presidential candidate. Who is Mike Pence? Hell if I know. But he's not Sarah Palin. And neither is second-place finisher Mike Huckabee.

So, really, who is Mike Pence? According to the Wall Street Journal, he's this douche: 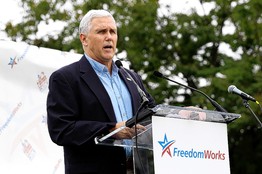 Also, he is a congressman from Indiana, which many consider an actual state and not just a swell racetrack for racecars.

Political analysts say Mr. Pence has credibility among establishment Republicans, as well as with the tea-party movement and social conservatives, which could could make him a contender for the presidential nomination

So, he's got cred with the assholes, the loons and the self-righteous prigs.

The tea-party movement has focused heavily on government fiscal responsibility,[and wild conspiracy theories] and many of its activists distrust establishment Republicans after the federal deficit run-ups over the last decade. Mr. Pence, a five-term congressman, is one of the few elected members of Congress to speak at tea-party rallies.

And that is, apparently, a selling point.

I fought to prevent old people from getting medicine! Hell of a campaign slogan!

Palin, by the way finished 5th in the poll behind Pence, Huckabee, Romney and Gingrich. She received 7% of the values vote. 7%. Looks like maybe the long honeymoon is finally over.

Posted by Professor Chaos at 6:50 PM No comments:

She thinks there are mice with human brains being made in labs.

"They are -- they are doing that here in the United States. American scientific companies are cross-breeding humans and animals and coming up with mice with fully functioning human brains. So they're already into this experiment." -- Christine O'Donnel, 2007.

She "Dabbled into Witchcraft?"

Several former aides said that as the Republican National Convention approached, O'Donnell became convinced she could land the coveted role as keynote speaker — the speech was ultimately delivered by former New York City mayor and presidential candidate Rudy Giuliani — and booked an expensive trip to St. Paul on that premise.
"She felt like she had to go and was hoping she would speak," said Keegan, who said he couldn’t believe what a waste of money it was for a little-known candidate who had raised just under $8,000 by the end of June that year. "When she got there, she got lucky and got seated somewhere and said, ‘Did you see me on TV?’

She believes that the only reason a man would want to be in a relationship with her is that he wouldn't know how to get off without her.

Dammit, Christine, if I ever figure out how to work this thing on my own, I'm gonna file for divorce so fast. . .

She's paranoid (a requirement, apparently, for entry into the tea party)

She has no idea what the word "feminist" means.

Asked if she considered herself a feminist, O'Donnell said: "Absolutely, but let me qualify that -- I consider myself an authentic feminist. Not as defined by the modern movement. And, let me clarify that a little bit more. I was an English major, so break it down: -ist means one who celebrates. As a feminist, I celebrate my femininity."

She's not real good about paying her bills

When O'Donnell wanted to place an order for hundreds of campaign T-shirts, Keegan [a former campaign staffer] said, she asked him to put the charge on his personal credit card.

"I said, ‘No, how are we going to pay for them? Her famous quote was always, 'have them invoice it.' I said, ‘We can't do that. In 20 days, we're going to have to pay for it.’ And it's not like we had all this money coming in," he explained. "Whenever Christine wanted money for something, she wanted everyone to stop paying somebody else."

That included halting payment of checks to staffers, which eventually led to several of them leaving, including Murray and Keegan before summer's end.

But before Keegan finished his projects in August 2008, he made sure he called all the vendors the campaign was using.

"I said, ‘Don't take any orders from her unless you get cash upfront,’" he warned.

According to published accounts, O’Donnell was using campaign funds for half her rent and $545.98 to purchase a mattress or mattresses from Mattress Giant.

and she had lied about being a graduate of Fairleigh Dickinson University, which had sued for unpaid student loans. She also had failed to pay her federal taxes and defaulted on her house payments.

(although, in her defense, her financial problems may stem largely from the fact that she has apparently never held an actual job, seeming to always be employed as the spokesperson for one phony wingnut group or another) She doesn't understand the economy. Or what socialism is. Or very much of anything.

(There are real doubts as to whether she ever actually took a class at Oxford --see here-- I don't see how she could have afforded to take an Oxford class when she couldn't pay her Farleigh-Dickinson bills, but whatever.)

I don't know what the SALT is, I would have said the Soviet Arms Limitation Talks, but that can't be it, so I looked it up.

according to the Daily Beast:

O’Donnell, a former spokeswoman for Concerned Women for America, had founded an organization called The Savior’s Alliance for Lifting the Truth, or The SALT, in 1996; it was meant to organize young people around opposition to abortion, sex education, and homosexuality.

. . . The SALT wasn’t much of an organization. It was run out of O’Donnell’s apartment, where Richards lived for his first month in California, and the two of them seemed to be its only employees. But O’Donnell was good at getting publicity. She appeared frequently on Politically Incorrect and other talk shows, and the two of them toured the country, giving press conferences and speaking at churches and colleges about sexual purity and curing homosexuality.

Toward the end of the Clinton administration, she protested the appointment of James Hormel to be ambassador to Luxembourg, a posting the religious right opposed because Hormel was gay. “The SALT was concerned about Hormel’s ties to the pedophile-rights movement,” her website said, though there was not a shred of evidence behind the slur. In 1997, in a clip recently unearthed by Talking Points Memo, she appeared on C-SPAN, where, looking fresh, lovely, and innocent, she objected to AIDS sufferers being called “victims” because the disease is the product of their own actions.

Wow! What a horrible person!

O’Donnell’s demonization of gay people is especially striking given the fact that, according to Richards, she has a sister who is openly lesbian.


Even the ultra-right Weekly Standard calls her a liar.

On Sunday, John McCormack, a writer for The Weekly Standard, reported that in 2005 O'Donnell filed a lawsuit asking for $6.9 million in damages for alleged gender discrimination and wrongful termination by a conservative nonprofit organization called the Intercollegiate Studies Institute.

She dropped the lawsuit in 2008, saying she could no longer afford an attorney.

In addition to raising questions about the alleged harassment, the article questioned her honesty in part by highlighting a claim in the lawsuit that O'Donnell once tried to take graduate-level classes at Princeton University.

According to The Weekly Standard, the lawsuit alleged O'Donnell "lost the increased earning power that a master's degree from Princeton would have created. In the future with proper finances, Miss O'Donnell should probably be able to return and complete that program."

The problem was that O'Donnell never took any graduate courses at Princeton, something she acknowledged to CNN.

I don't know why she lies about going to these elitist fancy-schmancy schools. It's not like the teabaggers are impressed by education.