I think it's time we put Grandpa in a home.


I just saw this transcript of the interview that Cheeto Mussolini gave to Time Magazine and Holy Schneikes, he's worse than we thought.
Not only is he completely delusional, but he can barely string together a coherent sentence. He makes George W. Bush look articulate.

TIME: Hey Mr. President, Thank you for taking the time.
Absolutely. How have you been, OK?
Yeah, it has been a wild couple months. You keep us busy.
Yeah, it’s been good though. It’s been good.

Good? Good? This is what you consider a good couple of months?What the hell would a bad month look like?

Do you want me to give you a quick overview [of the story]?
Yeah, it’s a cool story. I mean it’s, the concept is right. I predicted a lot of things, Michael. Some things that came to you a little bit later. But, you know, we just rolled out a list. Sweden. I make the statement, everyone goes crazy. The next day they have a massive riot, and death, and problems. Huma [Abedin] and Anthony [Weiner], you know, what I tweeted about that whole deal, and then it turned out he had it, all of Hillary’s email on his thing.

Your statement on Sweden was bullshit. I don't even know what you may have said about Huma Abedin and Anthony Weiner, but if you think you were somehow prescient in thinking that Hillary's close associate might have received e-mails from her, well I just don't know what to tell you.

Brexit, I was totally right about that. You were over there I think, when I predicted that, right, the day before. Brussels, I said, Brussels is not Brussels. I mean many other things, the election’s rigged against Bernie Sanders. We have a lot of things.


But there’s other things you said that haven’t panned out. The peg for this story is the wiretapping hearing on Monday, in which [FBI Director James] Comey and [NSA Director Mike] Rogers testified about your tweets there.

Yeah well if you’d look at, in fact I’ll give you the front page story, and just today I heard, just a little while ago, that Devin Nunes had a news conference, did you hear about this, where they have a lot of information on tapping. Did you hear about that?

Yes. "They" have a lot of information on "tapping." And exactly NONE of that information is that Barack Obama wiretapped Trump Tower.

Now remember this. When I said wiretapping, it was in quotes. Because a wiretapping is, you know today it is different than wire tapping. It is just a good description. But wiretapping was in quotes. What I’m talking about is surveillance. And today, [House Intelligence Committee Chairman] Devin Nunes just had a news conference. Now probably got obliterated by what’s happened in London. But just had a news conference, and here it is one of those things. The other one, election, I said we are going to win, we won. And many other things. And I think this is going to be very interesting. The first two times, it was not in quotes. The third time it was because consistency is not your strong suit. 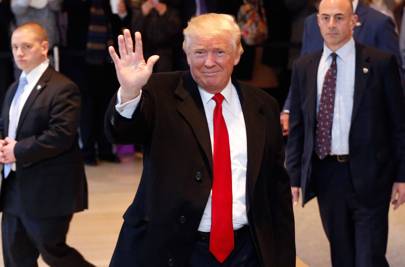 Also not a strong suit.

And, um, " here it is one of those things." That just doesn't mean a damn thing.


So you don’t feel like Comey’s testimony in any way takes away from the credibility of the tweets you put out, even with the quotes?
No, I have, look. I have articles saying it happened.


Really? Name one. In what publication did this article appear? On what day?

How is it in quotes? It's a press conference. That means he was speaking, not writing. Did he do the little finger-quotes every time he used the word "surveillance?"

Look. I predicted a lot of things that took a little of bit of time. Here, headline, for the front page of the New York Times, "Wiretapped data used in inquiry of Trump aides." That’s a headline.

Yeah, because if you tap the phones of enough Russian government officials, you're eventually going to hear Paul Manafort or Michael Flynn. You know what the headline doesn't say? That Barack Obama wiretapped Trump Tower!


Anyway, the interview goes on for a while and my brains are starting to leak out of my ear, so I'm going to bed. Maybe we'll look at more of this trainwreck tomorrow.


Posted by Professor Chaos at 8:58 PM 3 comments: Links to this post

I am determined to find someone other than me who thinks this is funny.

Guess what this is: 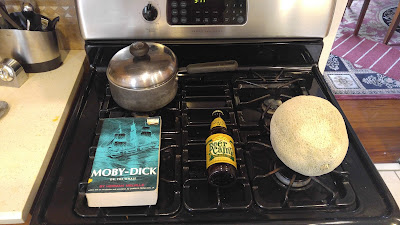 This is a Tome on the range where the beer and the cantaloupe lay. Posted by Professor Chaos at 7:06 PM 6 comments: Links to this post