The Republican objections to any Democratic nominee are starting to feel like a game of MadLibs.

Okay, fill in the name of the nominee, then choose from this list of words & phrases:

Legislating From The Bench.

Elena Kagan is miles away from mainstream America

Much has been made of Kagan's career path and her professional trailblazing. Despite a lack of any judicial experience, she is the first of her sex in two previously male-dominated domains -- first female dean of Harvard Law School and first female U.S. solicitor general.

No small accomplishments. But though we are what we do, what we do is not all of what we are.

(we are, we do we are to dee too? Is this just mental gymnastics to justify minimizing her accomplishments?)

We are also products of place. Where we grew up and how we experienced the physical environment of our formation are also a part of who we are.

What is Kagan's geography?. . . Coincidentally, she shares the same home town as the other two women on the court. Assuming Kagan is confirmed, all three women will hail from New York. Kagan grew up on the Upper West Side of Manhattan, Sonia Sotomayor is from the Bronx and Ruth Bader Ginsburg is from Brooklyn. If diversity on the court is our goal, we may be missing a region or two.

I think anyone who has spent any time in New York can tell you, they may be the same city, but those are three different worlds. But still, Three New Yorkers? Yeah, it sounds way better to object to that than to object to having three women or one kinda butchy woman, if you know what I mean. . . Yeah, let's go with the New York thing so we sound less like assholes!

These facts ultimately may be more anecdotally interesting than significant in terms of how a justice might perform.

Or, or, um they could be neither!

Then again, spending one's formative years walking past the infamously crime-riddled Murder Hotel en route to school, as Kagan did -- and, say, walking past the First Baptist Church to ballet class -- are not the same cultural marinade. The latter hypothetical is proffered only for the sake of contrast and metaphor. It seems remote to unlikely that a woman whose life has involved Baptist churches and ballet slippers would find herself on a track to today's Supreme Court, though that ought not to be the case.

with Kagan, the court will feature three Jews, six Catholics and nary a Protestant.

Oh my God! You're really going to go with the "there are too many Jews and Catholics" argument? I thought we agreed we were just going to trash New Yorkers, and everyone would just know that "New York" is code for "Jews and swarthy immigrants." You can't just come out and say, "hey, we've already got two Jews!" without sounding like a paranoid racist asshole.
And if you're going to claim that there are too many Catholics, you're gonna sound just a tad disingenuous considering the Catholics are:

So, if you have a problem with all the Catholics, seems like you should have objected a while back. Just saying.

Also, having a problem with too many Catholics? Kinda makes you sound like this guy:

The members of the US Supreme Court are papal soldiers.

When the One World Government is introduced to solve an emerging global crisis in the Great Tribulation, a papal controlled US Supreme Court will not object to a US President handing over his executive powers to the Vatican. Even today, both the Vice President and The Speaker on Capitol Hill are Roman Catholics.

Not to be outdone, GOP Chairman Michael Steele put out a statement which reads in part:

". . . what Americans want is a justice who will stay true to the Constitution and defend the rights of all Americans, adhering to the rule of law instead of legislating from the bench. Given Kagan’s opposition to allowing military recruiters access to her law school’s campus, her endorsement of the liberal agenda and her support for statements suggesting that the Constitution 'as originally drafted and conceived, was defective,’ you can expect Senate Republicans to respectfully raise serious and tough questions. . ."

Of course, the statement he refers to was made by none other than Thurgood Freakin Marshall, but yeah, let's pretend it's some radical hippie commie thing. 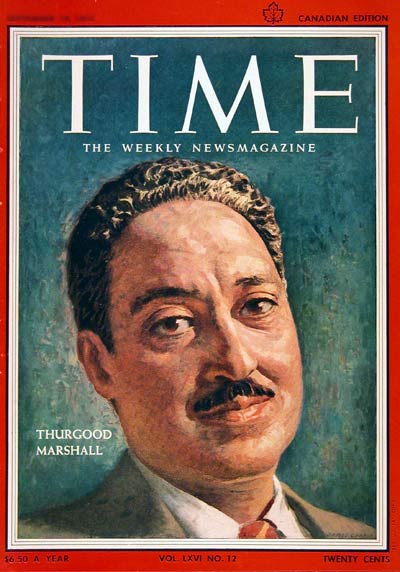 Mr. Steele, here's a quick rule of thumb, just for future reference. If, during a discussion of Constitutional Law, one finds that one is in agreement with Thurgood Marshall, one can pretty much go ahead and assume that one is right.
Also, the particular defect to which Justice Marshall was referring was the enshrinement of slavery as legal in the original Constitution, so um, you know. Kinda tough to argue that one.

And also, even if you don't bother to find out to what defect Marshall was referring, the mere fact that the Founding Fathers felt the need to amend the Constitution 10 times before it was ratified (Bill of Rights? Maybe you've heard of it?) and that it has been amended several times since, would indicate that Marshall wasn't the only one who saw a few flaws in the document.
But hey, good job working "liberal agenda" and "legislating from the bench" into one short paragraph.

Posted by Professor Chaos at 4:53 PM No comments: Links to this post