Remember when George W. Bush said that God told him what to do? 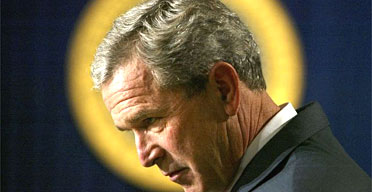 Well, turns out he's not the only one with a messiah complex. Yeah, this guy. Obviously!
Here's what his wackadoo father had to say in an interview with David Broder:


Cruz: Yes, but you know something, it is not something that started a couple of years ago. Let me just go back to when he was maybe four. When he was four I used to read Bible stories to him all the time. And I would declare and proclaim the word of God over him.

And I would just say, ‘You know Ted, you have been gifted above any man that I know and God has destined you for greatness’

Um, you just said he was FOUR YEARS OLD, and he's gifted above any man you know? Do you know any men? Sorry, all the men that Cruz Senior knows, his four year old totally kicks all your asses.

I was on the state board of the Religious Roundtable, so when my son Ted was eight years old, all we talked about around the dinner table was politics because I was so involved with the Reagan campaign. So during that time is when I asked him so many times, ‘You know Ted, when I lost my freedom in Cuba I had a place to come to. If we lose our freedoms here where are we going to go? There is no place to go.’

Except for maybe Canada, where you were when Ted was born.
Or England.
Or France
Or Germany
Or Sweden
Or Portugal

Anyway, there are lots of places where one can go to be free. But sure, no place to go!!!!!

And soon even America will not be safe for freedom unless Ted Cruz, God's Favorite Four-Year-Old, can save her!

Or maybe Steve King, who is the closest thing to Jesus that Steve King has ever seen!

Truly this man was the Son of God!
﻿
In reference to having been asked "you didn't really say that thing about calves like cantaloupes, right? I mean no one would actually say that, not even someone as ridiculous as you, I mean you didn't actually mean that, right?" he comes up with this:


As you remember, Mr. Speaker, the high priest said to Jesus, did you really say those things? Did you really preach those things? And Jesus said to the high priest, as the Jews were watching, ask them. They were there, they can tell you. That was, Mr. Speaker, the assertion by Jesus that he had a right to face his accusers. That principle remains today in our law that we have a right to face our accusers. And when he said ‘ask them, they were there, they can tell you,’ he’s facing his accusers and demanding they testify against him rather than make allegations behind his back.”

Yeah, that's totally the same thing. Being asked if you want to clarify your offensive comments is exactly like being on trial for your life in front of the Roman prefect. Obviously, if you say the wrong thing to the speaker, you could literally be nailed to a board and left to die in the  hot Jerusalem sun.

Also, I'm no theologian, but I don't think that Jesus was "asserting his right to face his accusers." At all. One thing about Jesus, he pretty much never asserted his rights. And his accusers were right there, he was already facing them. That's why he's able to say "ask them." To whom do you think he's referring to by "them?"

Posted by Professor Chaos at 7:09 PM 2 comments: Links to this post

The Balls On This Fuckin Guy!


I don't even have a joke here. What a horrible, and yet pathetic, person.
Posted by Professor Chaos at 6:10 PM 1 comment: Links to this post

Okay, in fairness, I haven't seen the entire movie, but that's mainly because it was so boring I fell asleep before the end.

First, the most obvious problem with this movie, the shockingly racist performance by Mickey Rooney. And you can say all you want about how "it was a different time," but there could not possibly have ever been a time when this insulting caricature could ever have been remotely acceptable.

But  Rooney aside, I think, and this is where the real blasphemy comes in, the biggest problem with this movie is that Audrey Hepburn is horribly miscast.

Don't get me wrong, I like Audrey Hepburn as much as the next fella, although I'll take Katherine any day, but she was all wrong for this role. Audrey Hepburn, an actress for whom the term "ingénue" could well have been coined as the free-spirited, devil-may-care, Auntie Mame character? It doesn't work. (And by the way, if anyone is not using "Auntie Maim" as a roller derby name yet, you're welcome!)

Posted by Professor Chaos at 6:07 PM 2 comments: Links to this post