Who cares about Marco Rubio's drink of water?

So he got thirsty. So what? Isn't the relevant topic here that he gave maybe the stupidest speech of all time?


Because he starts out with standard right-wing boilerplate like

Which you expect from any Republican, and which are presented as if they were obvious facts with no evidence required. But then he goes on to talk about how his neighbors depend on Social Security and Medicare (big government programs) and how "Medicare, is especially important to me. It provided my father the care he needed to battle cancer and ultimately die with dignity. And it pays for the care my mother receives now."

And he used the Federal student loan program to be able to attend college, but for you, government is bad and will hold you back and blah, blah, blah. . .

And perhaps the stupidest sentence anyone has ever said

"When we point out that no matter how many job-killing laws we pass, our government can't control the weather – he accuses us of wanting dirty water and dirty air."

So when we make a stupid claim, the President in your imagination says something that in real life he didn't say? The government can't control the weather. What an asinine thing to say. The government can take measures to limit the amount of damage that human activity is doing to the climate, but they can't "control the weather" so why bother? And I don't recall the President saying that you want dirty water and dirty air, but you actually make a pretty good case for that like a minute later when you say: "God also blessed America with abundant coal, oil and natural gas. Instead of wasting more taxpayer money on so-called "clean energy" companies like Solyndra, let's open up more federal lands for safe and responsible exploration."

So, fuck clean energy, let's dig more coal - hey, why do you think we want dirty air?
Actually, nobody thinks that you "want" dirty air. We think that you just don't give a damn whether or not it's clean as long as your donors are making lots of money.

And while we're on the subject of energy policy:

"If we can grow our energy industry, it will make us energy independent, it will create middle class jobs and it will help bring manufacturing back from places like China."

Really? Being energy independent will cause manufacturing companies to say "forget paying Chinese slave laborers $2 an hour in shit conditions, now that the US is drilling for more oil, I say we move the factory back to Ohio and pay people a middle-class wage!" 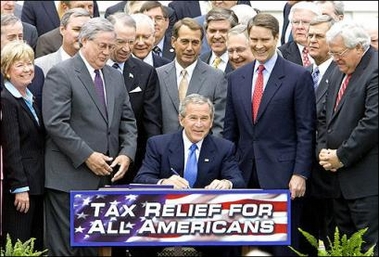 
I could go on, but it doesn't get any less stupid. Marco Rubio, or whoever wrote his rebuttal speech is a goddamm idiot. And that's what should be relevant not the drink of water.

Although, now that Rubio has tweeted out a picture of a bottle of Poland Spring water, I do wonder if maybe that wasn't a bit of product placement. Are they a donor?
﻿
Oh, and also this was weird:

"I needed water, what am I going to do" Rubio told me this morning on "Good Morning America" while pulling out a bottle of water and taking a sip. "God has a funny way of reminding us we're human," he said.

Um, most people don't really need a reminder that they're human, Senator. We're usually well aware of our humanity.

PS It's always worth noting that Marco Rubio voted against renewing the Violence Against Women Act.
Posted by Professor Chaos at 12:15 PM 2 comments: Links to this post

It may finally be safe to go to North Carolina

Copyright 2013 Associated Press. All rights reserved. This material may not be published, broadcast, rewritten or redistributed.


Rep. Rayne Brown, R-Davidson, is proposing a bill to make it a felony - A FELONY!- for any woman to expose, intentionally or otherwise, a "nipple, or any portion of the areola."

But what if it's an accidental "wardrobe malfunction" or "nip-slip?'


Democratic state Rep. Annie Mobley said she worried that women wearing "questionable fashions” could be prosecuted under the new rules.
But Committee Chairwoman Rep. Sarah Steven (R) suggested that women could use pasties or nipple coverings just to be safe.
“They’d be good to go” with nipple coverings, Stevens said.
"You know what they say, duct tape fixes everything," Republican state Rep. Tim Moore agreed.

Much better that women put duct tape on their breastseses than to take a chance that someone might accidentally see a nipple!

Rep. Rayne Brown, R-Davidson, knows all too well that House Bill 34, her bill defining women’s nipples as indecent, has been the punchline of many a joke this session.
“We’ve had the most fun with this bill for about the past week and a half, and that’s OK. You need to laugh sometimes,” she told the House Judiciary C Committee. “But there are communities across this state, there’s local governments across this state, and also local law enforcement for whom this issue is really not a laughing matter.”

That's right, this is NO LAUGHING MATTER for municipalities that have been struck with the scourge of visible baby-feeding parts! Oh, the horror!


Co-sponsor Rep. Rayne Brown, R-Davidson, told members of the House Judiciary Committee on Wednesday that her constituents are concerned about topless rallies promoting women's equality held the past two years in Asheville, which is located about 130 miles west of Brown's district.

But clearly falls within the borders of her beeswax!

My God, people must have been terrified!
Many cities have local ordinances barring women from going topless, but Asheville does not.
I've been to Asheville, and I'm not surprised. It seems like a minding tour own business kind of town. Plus it's too damn cold for toplessness to be much of an issue.
Brown said a blanket solution is needed to give law enforcement officers statewide the clear authority to make arrests when nipples are exposed.

I don't see how we can expect to be taken seriously as a society when we are so clearly terrified of boobs. If you don't want to see them, look away. It's not like there are topless women all around, I would venture to guess that there are very very few women who are at all interested in being topless in public. If you happen to run across one who is and the sight of her mammaries is that offensive to you, it doesn't take that much effort to look in another direction. Jeez!

Of course, what Ms Brown, Ms Stephens and the other Republicans who passed this bill through committee may be worried about is ending up looking like this: Posted by Professor Chaos at 11:23 AM No comments: Links to this post