I don't have a title for this

Netflix just added season 2 of "The Killing," so I may be incommunicado for a while. Late Monday, Nelson, Georgia passed a law called the “Family Protection Ordinance” that requires every adult in the 1,300-person town to own a gun “for purposes of emergency management and general safety of the city.”

How exactly is arming everyone in town going to contribute to "general safety?"

The town’s Police Chief, Heath Mitchell, told the AP that he hopes “having a gun would help residents take their protection into their own hands,” since the town has an understaffed police department and slow response time to 911 calls.

One councilman even used the National Rifle Association’s call for arming all Americans to defend the law, saying “I really felt like this ordinance was a security sign for our city. Basically it was a deterrent ordinance to tell potential criminals they might want to go on down the road a little bit.”

Also anyone who does not enjoy being shot all the time. They might also want to go down the road a bit.
You know, seems like this ordinance might be a bit difficult to enforce.

Councilman Duane Cronic, who sponsored the measure, said he knows the ordinance won’t be enforced but he still believes it will make the town safer 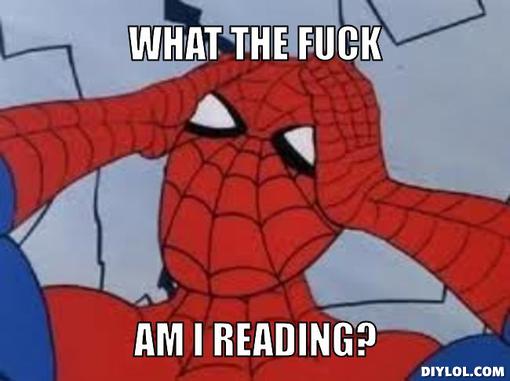 It won't be enforced, but somehow this non-enforced law will still. . . what?

The city council’s agenda says another purpose of the measure is “opposition of any future attempt by the federal government to confiscate personal firearms.”

﻿
﻿
﻿
Ohhhhh, now I get it. It's an imaginary law to protect against an imaginary threat! Now it makes perfect sense!
Now you see why we rarely venture outside the city limits of Atlanta.

Jillian Micheals is Coming to the Fabulous Fox Theater

Which seems sort of odd, because , being only vaguely aware of her existence, I wasn't aware of her having any sort of marketable talent other than being remarkably physically fit. And as far as I know, no one is going to pay $40 to watch someone be physically fit.

Check out these fuckin' abs!
That'll be 40 bucks, please!
For those of you not familiar with the Fox theater, it is this: One of the last of the great old movie palaces of the 1930's.
Over the years, the Fox has hosted luminaries from Jack Benny to Liberace, to Tom Waits to Leonard Cohen. Although it is mostly famous for being the theater that most people think hosted the premiere of Gone With The Wind. (It actually debuted at the Lowes Atlanta)

Holy fuck! Sixteen Bucks?
So what is Jillian Micheals going to do at the Fox? Does she fancy herself a singer? An actress? A stand-up comic? No. She's doing this:

Jillian Michaels is hitting the road with her first-ever “MAXIMIZE YOUR LIFE” tour, a unique LIVE experience designed to help you build the life of your dreams.
Which couldn't possibly be a scam! Apparently, she's banking on their being enough gullible boobs in each city who are just that eager to be parted from their money.
You’ve watched her on TV and witnessed the powerful life transformations Jillian Michaels has helped so many achieve. Now, it’s your turn! Don't miss this intimate and uniquely personal LIVE experience coming to 34 cities in the United States and Canada this spring. Let Jillian show YOU how to harness your potential, kick-start your goals, and live the exceptional life that you’ve always wanted, but thought wasn’t possible.
Hmm, sound like a lot of hype and empty promises to me. Probably no results, either.
No hype, no false promises: just results.
So how does she accomplish this life transformation process? She doesn't say. I guess you have to pay your 40 bucks to find out, although I'll wager it has something to do with weight loss?

You too can transform yourself from an attractive young woman into someone who could be mistaken for a man!
Because all I know about her is that she's part of the "Biggest Loser" show, a show in which morbidly obese people are screamed at while performing the kinds of exercise that could give a fit person a heart attack. 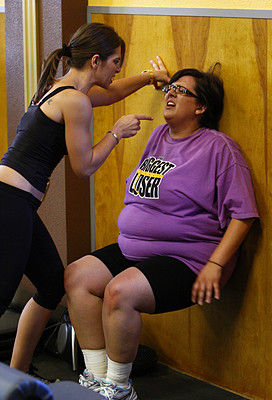 ﻿
Seriously, it's only a matter of time until they kill someone on that show.

Let's have this guy drag a sled uphill! What could possibly go wrong?
Although, I suppose it's to be expected in a society wherein being dead is preferable to being overweight to a lot of folks. I guess what I'm saying is that Jillian Micheals is a perfect encapsulation of everything that's wrong with our modern culture. A culture obsessed with physical attractiveness. A culture that rewards the famous merely for being famous, not because of any actual accomplishments. And a culture where an alarming number of people will tune in to television shows just to watch someone be mean and rude to someone weaker than they are. At least Ramsay doesn't scream at little girls.
I should probably add for the record that I am probably about 20 lbs overweight and I get winded watching televised sports. But still, Jillian Micheals? At the Fox? Ugh!﻿
﻿
﻿
﻿
Posted by Professor Chaos at 12:30 AM 1 comment: Links to this post