See how much better the private sector is!

The Global War on Terror is, if nothing else, a showcase for what can be accomplished when government functions like military operations are outsourced to the private sector. Naturally, the ruthless efficiency of the private sector saves money. Although Blackwater and other mercenaries get paid like 10 times as much as actual soldiers, but I'm sure that somehow that translates into savings for us, the taxpayers. Because private for-profit companies always do everything better than government agencies ever could. And they do it cheaper, even if it costs more!

And sure, occasionally a soldier gets electrocuted, or served tainted meat, but Halliburton's gotta make a profit somehow, right?

But for the best example, one need look no further than

This company was hired to provide security for the American Embassy in Kabul. Let's take a look at these fine young men in action: 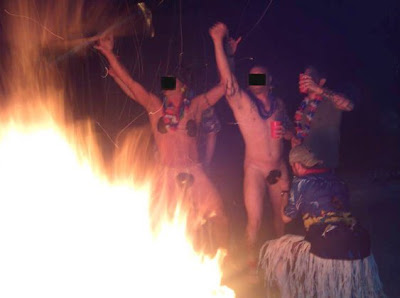 What the Fuck? That can't be right! 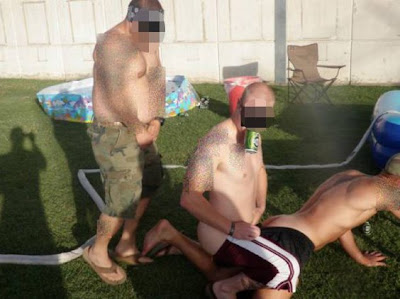 What the hell is going on here?

Photos of embassy guards holding sex parties in Kabul have caused a stir in Washington. Some of the men involved claim they were forced to participate by their supervisors at the ArmorGroup security firm. 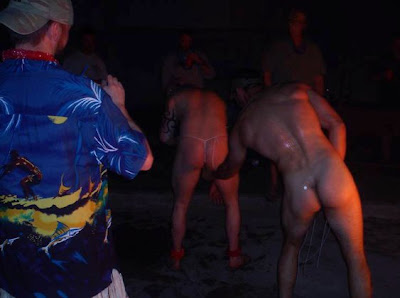 Private security contractors who guard the US Embassy in Kabul have engaged in lewd behavior and humiliated subordinates, according to a report released this week. Photographs and video footage show scantily dressed guards engaging in drinking and demeaning sex games. 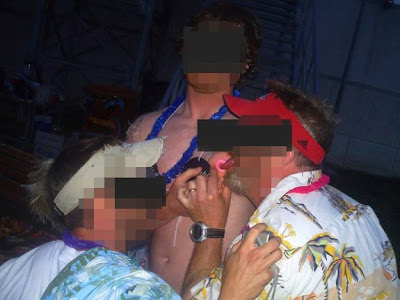 The images come from Camp Sullivan, the quarters of the security personnel for the US Embassy in Kabul, only a few kilometers from the embassy complex in the Afghan capital. They show naked men, employees of the security firm, whose genitals are only barely covered with a kind of black beer mat. The men are drinking, dancing naked around a fire, licking each others nipples and grabbing each others testicles. They perform sex acts, pour vodka down each others' naked backs and drink it from the buttocks.

So, wait. Are you saying maybe it's not the best idea to send over a bunch of cowboy mercenaries into a war zone where they will be seen as representing the United States of America at a time when we're trying to win over the hearts and minds of the local populace?
What are you, a commie?
Posted by Professor Chaos at 9:02 PM

So the government will still go on with these no-bid contracts...and these jerks will still be doing this same vile stuff. Scary huh?!?!