Jeesus Christ, Google. What the Fuck? 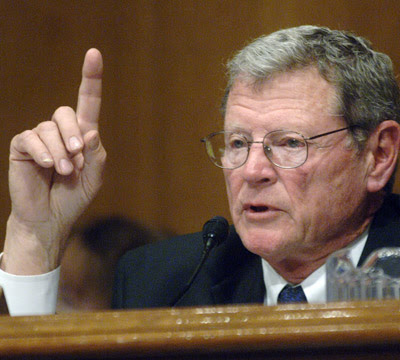 Oh, for the love of. . . Are you fucking serious, Google?

Didn't Google's corporate logo used to be "don't be Evil?" I guess they've decided that it's not strictly "evil" to be a huge bag of butts and shockingly pignorant (copyright 2011, Chaos Industries)

The lunch, at the company’s Washington, D.C., office, will benefit the Oklahoma Republican Jim Inhofe, who has made a career of dismissing climate change as a “hoax” on the Senate floor.
Proceeds of the July 11 lunch, priced at $250 to $2,500, will also go to the national Republican Senatorial Committee.

You know, it would be one thing if James Inhofe was merely an embarrassment to a once-great (arguably) nation and a walking punchline to a joke about inbred Oklahomans, but his fucktarded assholery has real-world consequences for this planet and the people condemned to live upon it (oh, shit. That's us!)

Also, who hosts a fundraiser at some company's DC office? Are there no banquet halls available in Oklahoma?

Seriously, though, come on, Google. You know, if you really don't understand how dangerously stupid James Inhofe is, you could find out pretty quick with A GOOGLE SEARCH!

I mean, it's not like you guys are actually in favor of environmental destruction, are you?

It’s the second show of support from Google for the anti-climate cause in recent weeks.
Last month, the Washington Post reported that the internet company had donated $50,000 for a fundraising dinner for the ultra-conservative Competitive Enterprise Institute — topping the contributions even of the Koch oil billionaires.

The Competitive Enterprise Institute has launched multiple lawsuits aimed at trying to discredit the science behind climate change — accusing scientists of fraud. None has so far succeeded.

Really? That's hard to believe. I mean, if you can't sue someone for doing science, what has our legal system come to?
Seriously, what standing could you possibly have to sue climate science? The fact that they're showing you to be moronically wrong about science maybe equals defamation of character?


Come on, Google. You know who James Inhofe is. You know he's dangerously wrong about, well, everything, but especially climatology. You know that. there's no excuse for helping to fuel his destructive idiocy. I don't know what committee he sits on that might affect your future business plans or whatever, but there is no way in hell you're afraid enough of this pinhead to fund him out of intimidation. Just stop it. It's wrong, you know it's wrong, just stop it.

However, a company spokesperson noted that Google maintained data centers in Oklahoma. The spokesperson then sent an email saying:


We regularly host fundraisers for candidates, on both sides of the aisle, but that doesn’t mean we endorse all of their positions. And while we disagree on climate change policy, we share an interest with Senator Inhofe in the employees and data center we have in Oklahoma.


Fuck, you, yes it does mean that you endorse their positions. How much more of an endorsement could you give a candidate than to host a fundraiser on his behalf? You can't say "we're raising a bunch of money to help this guy get re-elected, but we sure hope it doesn't work, 'cuz holy fuck is he a loonie!"

And it's not just his stance on science being wrong because he thinks science is some sort of conspiracy and the Bible doesn't talk about it so it isn't true. He's really just a terrible, awful person:

Wandering off topic a bit, as I seem wont to do lately, you want to know what I (a "normal person") and James Inhofe (not even close) have in common?

James Inhofe knows exactly DICK about climate science. I also know pretty much dick. The difference is I'm not smart enough (barely) to realize this. And I understand that the men and women who have spent their adult lives studying climate science know a bit more about climate science than the guy who watched an episode of NOVA once, but it was about string theory and I didn't really understand it that well and I guess it isn't really all that germane to the topic at hand, but I did stay awake through the whole thing.

So fuck you, Google. And fuck you, people of Oklahoma who keep returning this anthropomorphic pig's anus to the Senate (Along with Coburn, who's just as bad). This isn't about political differences, this is about how bad the next tornado season is going to be, and all the tornado seasons to come. It's about how n=many people are going to be killed, how many homes are going to be destroyed because we refuse to take any steps to mitigate the damage we as a species are doing to our habitat, and James Inhofe is a big reason why none of those steps are being taken. And, sure if it was just tornados, we could all say "hey, Okalhoma, if you don't mind being Wizard-of-Ozzed all over the plains by giant tornadoes every year, that's your problem. And if we lived there, we'd probably be praying for tornadoes, too,"  but it's also about how many people will be killed by hurricanes in Florida, and how many people will drown in floods throughout the Ohio River Basin, and (and I know this is hard for you to grasp) how many people will die in horrible giant blizzards in the Northeast.
So, knock this shit off, people of Oklahoma. It's not funny. Your actions affect everybody, and so far the effects have been pretty terrible. For fuck's sake, you just had the two largest tornadoes in history, or the tstrongest, or something, I f=don't know but they were pretty awful.  No one's asking you to like Al Gore. Just quit obstructing the people who are trying to save the rest of us from destructive weather patterns, and you can make fun of him for being dull and aft all you want. He probably won't mind, if it means that the Earth might still be inhabitable for his grandkids.
Posted by Professor Chaos at 7:58 PM