So, did I miss any stupid while I was gone?

Haha, of course I did!

I missed Republicans trying to find ways that a plane getting shot down by a missle was somehow Barack Obama's fault.

I missed Congressman Phil Gingrey a doctor, for God's sake, fearing that Honduran refugees might be bringing the ebola virus with them, because the easiest way to the texas border is apparently via Sierra Leone?

I missed a wingnut nurse lady suing a hospital for not hiring her to do d job she refused to do.

But I got home just in time for this

Why we DON’T use Birth Control

An areticle written by a group calling itself, I kid you not, "Catholic Sistas." 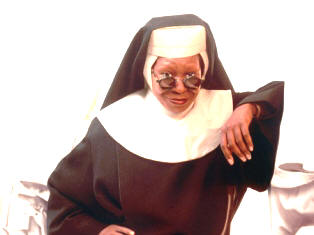 They are, however, a group of Catholic women who felt compelled to post "reasons" for their decision to eschew birth control. Now one would think that the "reason"  would be "cuz I'm Catrholic," but no, these ladies have put a lot more "thought" into this issue.

We do not use birth control……. “Because observing and charting my fertility is empowering!”

Oh, is "empowering" just some buzz word you've heard that you think will make you seem smart? “Because my fertility is my superpower.”

That may be the saddest sentence I have ever read. Fertility a superpower? Because, compared to a sea turtle, you really suck at fertility, and no one thinks a sea turtle is a superhero.


“Because regularly shooting my body up with extra hormones would make it a lot harder to be a reasonable, thoughtful, and logical human being.”

“Because I really don’t think it’s healthy for my body to think it is perpetually pregnant.”

Yes, much healthier to actually BE perpetually pregnant!
Also, what you "really think" isn't really all that persuasive compared to what doctors and science people really think.


“Because I want my husband to actually be involved in our decision to have sex and know that I’m not carrying the weight alone and that he is not just using me for sex.”


So, wait. Do you normally not include your husband? What, do you just wait for him to fall asleep and then mount him, or. . .? How does this work, exactyl? Seriously, tell me how this works, Slowly. In great detail! “Because if I didn’t want to have a baby, I just wouldn’t have sex.”

Wow. The last of the red-hot lovers, eh? What a wonderful life you must have, constantly having to make that false choice.

“Because I cannot imagine one of my children not existing.”


Yeah, because if you take birth control, your kids stop existing, just fading away like Michael J. Fox in Back to the Future.


“Because having a family is on my bucket list. And infinitely more fun and rewarding than anything else.”

Maybe learning the difference between birth control and sterilization should also be on that list?


“Because I don’t need anything to control me, I can control myself.”

Um, you can control your ovulation? You can, by sheer power of will, prevent your fertilized ova from implanting in your uterine wall? Damn, that is impressive. Suck on that, Tibetan monks! Yeah, that's pretty much what normal couples do, too.

Posted by Professor Chaos at 6:58 PM

A particular exceptional asinine position from those already too far gone.

these broads remind me of the duggars.

no fucking thank you; I chose NOT to spawn and create more mouths to feed. do I regret this decision? HELL NO!

If these women choose not to use birth control for any or all of those reasons, that's perfectly fine. It's their free choice and they're entitled to live as they see fit. The problem is when that choice is sought to be imposed on other women who feel differently. THAT'S why the Catholic Church is a fascist misogynistic tyrant.

"So, wait. Do you normally not include your husband? What, do you just wait for him to fall asleep and then mount him, or. . .? How does this work, exactyl? Seriously, tell me how this works, Slowly. In great detail!".

Great, now I'm going to waste the rest of the day figuring out exactly what the ritual to "celebrate feminine genius" would look like. Squatting over a smoldering sage bundle would have to be involved, obvs...