How is this even possible?

I don't understand how any of this is possible.

This is the #Deplorable Lee Mueller of Las Vegas who privately owns the dam that collapsed in Michigan, flooding the city of Midland under 9 feet of water. He was warned, but deliberately refused to repair the dam because he wanted tax payers to pay for the repairs pic.twitter.com/9J8KrTrBpM
— Stone (@stonecold2050) May 21, 2020

Why is a private person or entity allowed to own a dam?
It's not just my natural lefty tendancy to think of a dam as a public good that should be operated in the public interest, it also seems like an insanely dangerous idea to let one person have control over something that could wipe out thousands of lives and destroy millions of dollars worth of property.

Where I come from, there are four dams, the Pilarcitos, the Upper and Lower Crystal Springs, and the San Andreas. (Funny story, the San Andreas Fault was actually named after the San Andreas Dam after it was discovered that a seismic fault line ran under the ground where they had just built a new earthen dam. Heh heh heh, nothing to worry about, folks. Everything's fine! heh heh heh. . .

Anyway, the dams in San Mateo County are owned by the San Francisco Public Utilities Commission (long story, you can read about it here if you're interested). So every time there's an earthquake (and probably at other times as well), the SFPUC  sends engineers to inspect the dams to ensure their structural iintegrity. Because if the Pilarcitos dam was to give way, billions of gallons of water would flood the city of San Mateo nearly instantaneously killing a whole lot of people.

I assumed that's how it was everywhere. The dams around here all seem to be owned and operated by the Army Corps of Engineers. Who in holy Hell thought it was a good idea to leave something this vital to public safety in the hands of some sociopathic millionaire? 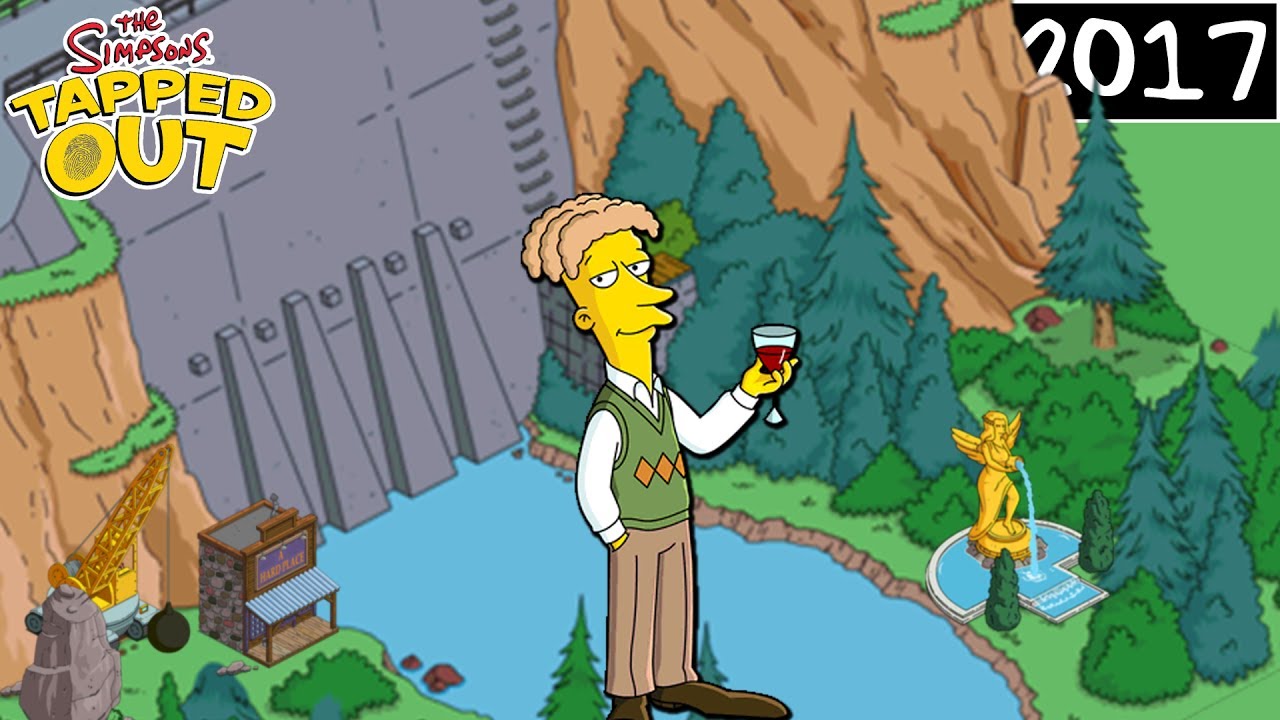 I don't know, there's a Mr Burns / Sideshow Cecil joke in there somewhere.


Anyway, this story just gets worse from here:


MIDLAND — Nine days after federal regulators revoked a license of the Edenville Dam over years of failing to fix “structural instability,” Michigan inspectors ruled it was in “fair” condition and allowed it to continue operating, records show.

Sighhhhhh. . . Okay, first of all, Federal regulators just let him go for years not making repairs? No one MADE him make repairs? They just kept saying "hey, you know, you really oughta maybe think about not letting your dam get all decrepit and run down. Please?"

Then when they finally had enough, their solution was to revoke his license to operate the dam. So the dam is still there, holding back tons of water and falling further and further into dis-repair, it's just no longer generating electricity. And someone thought "problem solved! No need to worry any more about the dam breaking!" How did they think this was helping? It's like a restaurant is on fire and the answer is to revoke the owner's business license. The fire is still burning. The neighboring businesses are still in danger.

Then, as if this wasn't cement-head stupid enough, the Snyder Administration steps in and says"Nah, you go ahead and keep running your dam, we're sure that, as a private for-profit business you know what is best!"

And in the 19 months since that 2018 inspection, Michigan regulators didn’t  demand any repairs to the dam that failed Tuesday

They said the dam was in FAIR condition. There is no FAIR condition for a dam. There is good condition and there is not good enough condition. It's not a used car. You can't look at a dam and say "yeah, she's probably got another couple hundred good miles in her." Someone needs to make these repairs. And since the owner has shown no interest in doing so, the dam needs to be taken away from him by the state or the feds and they can make the repairs and then operate it safely. Or the relevant state or federal agency could make the repairs themselves and bill the owner. If he doesn't pay, you foreclose on the dam. Or jail the son of a bitch. Or both.


Since at least 2004, federal regulators have demanded repairs to the dam, writing its owners “failed for many years to comply with significant license and safety requirements.”

God DAMN IT ~ 2004? This shit has been going on since TWO THOUSAND AND FOUR?!?!
They have "failed to comply with . . .safety requirements?" Do you. . .do you understand what the word "requirements" means? You don't have the option to comply or not comply with fucking REQUIREMENTS! How was this allowed to go on for 16 fucking years? I mean, could Jon Dillinger have just said "I believe I will decline to comply with the requirement that I not rob banks?" Why do we even have laws?


Michigan regulators “had strong concerns the dam did not have enough spillway capacity” in the event of heavy rains and “expressed those concerns,” said Nick Assendelft, a state energy spokesperson.


Oh, they "expressed concerns?" Oh well why didn't you say so? Well that's a horse of a different color! If I had known that they not only had concerns, but had, in fact, expressed those concerns, well I guess there's no need for me to be upset. I mean, it sounds like they did everything they could possibly think of!

But regulators did not move beyond “continued conversations” about repairs, he said.  Instead, the state was focused on what it called illegal efforts by Boyce to lower water levels the past two years.

About his "illegal efforts to lower water levels?"
Do you not uinderstand what the word "illegal" means? It means arrest the motherfucker and take his fucking dam away before he gets someone killed.

Boyce generates power to sell to Consumers Energy, so regulation of its dam initially fell to the Federal Energy Regulatory Commission rather than state inspectors.
In court documents, federal regulators wrote Boyce repeatedly failed to improve its capacity to handle big floods, revealing “a pattern of delay and indifference to the potential consequences.” Fixing the dam was necessary “in order to protect life, limb, and property,” lawyers for the FERC wrote in January 2018.


Yeah, no fucking kidding. So why didn't you do something about it?

I really don't understand why if you or I commit a crime, we get arrested. If a company commits a crime, the government's lawyers have to argue in front of a judge to try to be allowed to introduce some cionsequences which, if there are any, are negotiated with the company like it was some kind of a business deal. You always see these stories about how "Indiscriminate Deathcorp has agreed to pay 10 million dollars for dumping planeloads of flaming napalm onto residential neighborhoods. . ." I would love to commit crimes and then say to the police, "okay, here's what I'm willing to do: I'll ay a small fine and pick up trash on the weekend. Jail time? Ha! You must be joking, I definitely do not agree to that!"


For years, the FERC had told Boyce the dam didn’t meet design standards and could only drain about half of the expected “probable maximum flood” — the amount of water expected in the most severe storm that’s reasonably possible in the region.
Federal regulators told Boyce Hydro it needed to build two spillways to accommodate potential flooding,` and the company agreed.
But over the next 13 years, Boyce missed numerous deadlines to add the spillways, arguing it didn’t have enough money to finish the projects and couldn’t borrow more.

Jesus Christ! Have these people never heard of eminent domain? You can't afford to run your dam in a way that doesn't endanger thousands of people? Well here's a check for the fair market value, minus all the fines that should be levied plus interest and penalties. It's our dam now. Oh, and you'll find that fair market value is gonna be quite a bit lower than you might have hoped because this dam is in a disgraceful state of disrepair.

All right, well now they've learned the hard way. Now there's a flood and they are having to come to grips with the failures of their laissez faire approach to public safety. Things are obviously going to be different now.


MIDLAND COUNTY, MI – The Federal Energy Regulatory Commission has ordered the owner of the Sanford Dam to establish an independent investigation team to determine why floodwaters overflowed the structure.

The company is to establish a team

The agency in charge of regulating the dams

wants the owner of the dam

to investigate what went wrong

with the dam they own.

This is what we're doing? "Hey, Tony Soprano, would you and your guys look into why there's so much corruption in New Jersey? See if you can figure out who's responsible for all this crime and graft, would you?"


In a 2018 filing, regulators characterized dam owner Boyce Hydro as chronically non-compliant with regulatory requests to upgrade the dam.

Requests.
They didn't comply with REQUESTS!

Why? Why were there requests? Why were there not orders? Why was there not enforcement? Why is no one looking out for us? They just get to do whatever they want and normal people just have to suffer the consequences. When do we take up our torches and pitchforks?


Posted by Professor Chaos at 7:59 PM

I thought the USA was the most litigious society on the face of the earth. When will the gazillion-dollar lawsuits be filed against the dam owner and the state of Michigan?

The fact that this fucker isn't already in jail is amazing to me. And it will have to be the State... Trump's fed will never put an executive in jail (unless they're a Democrat.)

@Debra
We are the litigious society on the face of the earth and this time I'm all for it.

Isn't unfettered capitalism wonderful in the land of the flea and the home of the knave?