Television producer Mark Burnett and his wife, actress Roma Downey, have teamed to create a new 10-hour miniseries titled “The Bible” that will air next month on The History Channel.

My friend who recently came out was more comfortable touching his wife than Mark is.


Now this sounds like it could possibly be a worthwhile venture, something like the "banned from the Bible" series that the History Channel did several years ago, when it was still interested in History, discussing the history of how the Bible came to be in its present form and which books were left out for various reasons, but no. No, this is something different.

Burnett, an Emmy Award winner best known for creating a number of reality shows, including “The Apprentice,” “Survivor,” “Shark Tank,” and “The Voice,” said the forthcoming miniseries is the most important work he’s done to date.

Talk about damning with faint praise!
“We completely believe in the Bible, but beyond that, it's the most important book in history. It's the foundation of our society and our laws and has created so much art through the centuries,” he said.

Oh, great job, there History Channel! Let's have an historical revisionist make a series about history. The foundation of our society and our laws? Seriously? How many times do we have to go over this?
(http://wwwirritant.blogspot.com/2009/04/historical-revisionists.html)

The production features special effects depicting miracles such as Moses parting the Red Sea, Jesus walking on water, and Daniel with the lions. Burnett said the goal of not only the special effects but the music was to help create a work that will still be popular decades later.


So, this is going to be a literal depiction of the Bible, floods, talking snakes and all, and it's going to be presented as History.

I'm not saying there isn't history in the Bible. I know Herod the Great was an actual historical person (although not all that great from what I hear). I think Nebuchadnezzar was a real person, and I have no doubt that there was a First Century rabbi named Jesus of Nazareth who attracted a large following and was executed by the Romans because, from what I understand, Pontius Pilate would crucify you as soon as look at you, especially if you seemed like you might be a threat to his grasp on power, but that's not what we're talking about here. They intend to portray Moses as a man who parted the Red Sea by the power of Jaweh, and Jesus as a man who walked on water and that's fine if the show is going to be on CBN, but not the History Channel. Although, now that I think about it. . .
Oh, and this should come as no surprise:

Of course, they haven't seen it, but that's never stopped them from having an opinion about a movie or TV show.

While film and television may not be an industry synonymous with religion and faith, Burnett said they can definitely be inspirational vehicles.
“We've met so many people who have made their introduction to faith from movies.

“If you're going to step up and make a 10-hour series on the Bible, it needs to be able to go around the world and stand the test of time for the next 50 years. Just as we are still watching ‘The Ten Commandments’ on television, hopefully people will still be watching this in 50 years’ time,” Burnett said.

Yes, I'm sure they will. I'm sure that a Mark Burnett production will have the same staying power as one of the greatest Cecil B. DeMille epics. I'm sure that's exactly what's going to happen. 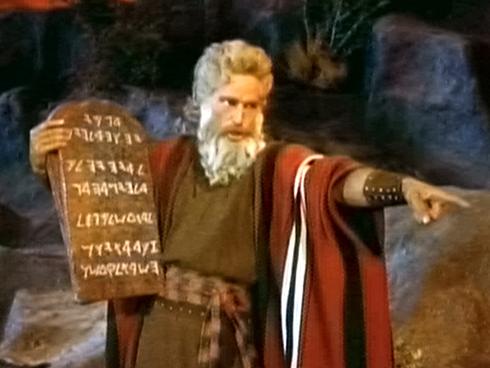 Thou shalt not even dream of it, loser!

Posted by Professor Chaos at 10:49 PM

Oh, gag. Well, at least I can save my valuable time and skip this crap.

So which one of the morons from Pawn Stars is going to play the baby Jesus?