Senate Majority Leader Harry Reid declared in press conference today that he will not support GITMO detainees being held in the United States. Reid said that he supports Obama’s plan to close GITMO, but will not support, “terrorists to be released in the United States.”
Jeez, Harry! Come on! No one is talking about releasing terrorists anywhere, let alone releasing them into the U.S. You gotta stop watching FOX! Do you really think that President Obama would just let terrorists loose to wander the streets of America? How do you explain this position of yours?

Reid was asked why the Senate wouldn’t fund the closure of GITMO
He said,“I agree with President Bush.

Oh Good God Almighty! It's worse than I thought! You agree with Bush? The man who was wrong about, um, everything?

Yeah, that doesn't really work. That's like saying "I'm a devout Baptist. And also a Hindu. And a Mormon." Oh, right. You are a Mormon, aren't you? What does that church do to its followers' minds?
Reid noted, however, that “many Americans have concerns about terrorists coming into our community.”
Yeah, unless your community is a Supermax prison, that's not really going to be an issue.

REID: Can’t put them in prison unless you release them.

What? Do you have any idea how prison transfers work? It's not like when your company transfers you to a different branch. They don't just tell you when to show up and who to ask for. 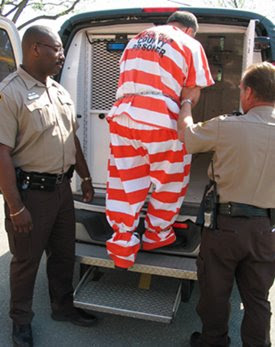 This is how they transport a garden variety criminal.
Not even a high-priority offender. So, yeah, I think that the U.S. Dept. of Homeland Security could handle transferring prisoners into US prisons. 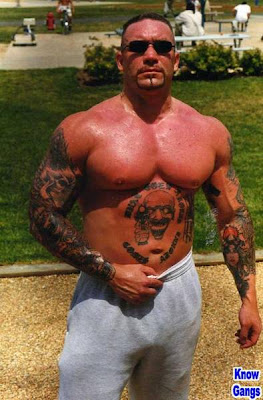 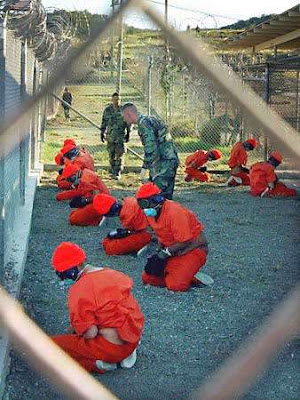 You think they can't handle these guys?

Posted by Professor Chaos at 6:44 PM