Flashback Friday - Sister Double Happiness and the Dicks from Texas


I don't remember how I stumbled on to Sister Double Happiness in the early '90's. I did see them once in one of San Francisco's smaller clubs, but that was after i already had the cd.
Anyway, I hadn't thought much about them until I read an article on Nightflight.com about a band called The Dicks from Texas. They talked about the lead singer - this guy: 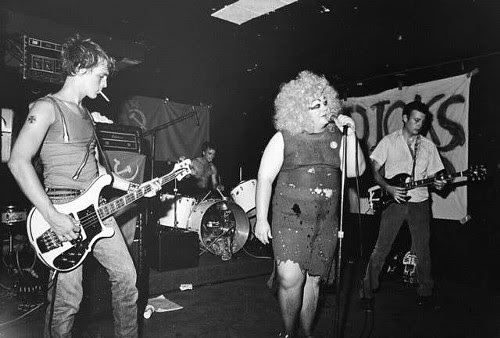 and said his name was Gary Floyd. And I thought that couldn't possibly be the same Gary Floyd from Sister Double Happiness, could it? Then I read a bit further and sure enough:


Well, Lynn Perko was deefinitely the drummer for SDH, so that's got to be the same Gary Floyd.

So, please to enjoy a few selections from Sister Double Happiness and the Dicks

Posted by Professor Chaos at 9:42 PM

What a coincidence. I'd never heard of either band before, but just the other day my son showed me a live performance video of The Dicks. I was absolutely blown away. Their music just grabbed me by the guts.

What comes out of Texas never fails to surprise and astound me. Once again, you've introduced me to new music! Sister Double Happiness had a much more melodic sound than The Dicks, didn't they? I quite like Poodle Dog. But that hard-driving, raw sound of Saturday Night at the Bookstore really appeals to me -- plus, how can you not love a screed against hypocrisy? TELL YOUR FUCKIN WIFE! Hahahaha, thanks, Professor.

This is the first I've heard of them. They do have a way of sneaking up and grabbing you by the cajones. I'm not sure what it says about me, the olden guy, but i like the fuckers! Thanks for sharing.