Several days after plans were announced for a Labor Day celebration where people could fire their guns at a shooting range on a Nocatee business’s property, St. Johns County code enforcement officers this week ordered the range closed down by Tuesday.

In response, “Leaded Tea Party” organizer Richard Willich, president of MDI Holdings and the new Florida chairman of Americans for Prosperity, said he has banned all government officials without warrants from the MDI property, west of Ponte Vedra Beach.

“I’m going ahead with my picnic and that’s that,” Willich said. “It has always been my understanding that we have the right to assemble. We have the right of free speech, the right to carry guns. I don’t know when or how the local county code person can say I don’t have those rights. I don’t like it at all.”

The event is planned to include a live band, free food, horse rides for children

Oh, Jeez, there's going to be kids there?

horse rides for children and use of the shooting range for free target practice. The dirt pile has shooting range-type targets set up.

Willich said the enforcement officers were “very arrogant and aggressive”
“I think the code enforcement guys are breaking the law; we should arrest them. Yesterday, all government people were welcomed here; today they’re not.”

Shit, this has Ruby Ridge written all over it.

Who is this Richard Willich?
According to this press release, he's the chairman of the Florida Advisory Board for Americans For Prosperity.

What is Americans for Prosperity?
According to Source Watch:

AFP was one of the lead organizations behind the Tax Day Tea Party protests April 15, 2009.

This does not end well.
Posted by Professor Chaos at 11:44 PM 5 comments:

Five out of Six men Agree

Five out of Six Men Agree: 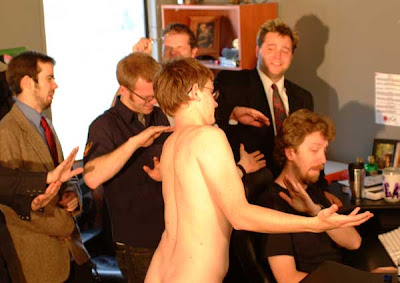 The Daily Irritant should be read while fully clothed,