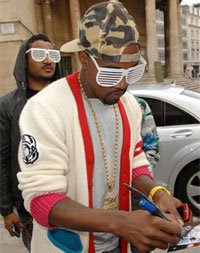 But because every time he opens his mouth, a fresh new batch of stupid falls out.
Here's the most recent:

According to a Reuters report, at one point during the taping West asked the crowd, "Can't we give Chris a break? ... I know I make mistakes in life." Brown, who was arrested during the Grammys and booked on suspicion of making criminal threats, a felony, has not been charged in the case.

West also reportedly received loud applause when he followed by saying, "Michael Jackson, amazing. Michael Phelps, amazing ... He's a real f---in' person; he makes mistakes." West also made a rather puzzing comment about O.J. Simpson, saying, "O.J. Simpson, amazing. Is he not? What he did, when he did, what he did. Was he not amazing, though?"

Right, give 'em a break! Other than a little domestic violence, child molestation, and the occasional double homicide, what did these guys ever do to be picked on like this?

Now, an ordinary jagoff would just stop there. An average tool would say, okay, that's enough douchebaggery for one day, and retire to his estate in the hills of Dildonia. But not Kanye "I deserve every Grammy ever awarded in every category and a few categories that I have created myself" West. Oh, no! The master chef topped it off with a soupcon of delusion:

The Brown comments were not the only controversy West stirred up on the stage. A Reuters reporter who was reportedly on site during the taping said 'He also tore into Radiohead after singer Thom Yorke allegedly snubbed him backstage at the Grammys five days earlier. The dis hurt because West loves the British band, which he considers one of his few artistic rivals.

Kanye, Kanye, Kanye, have you ever listened to Radiohead? Have you heard any of your own songs? Seriously, you're not in their league. When you get a minute, listen to "Karma Police." Then listen to "Gold-Digger." Ok, see what I mean? You in the same sentence with Radiohead is like Micheal Phelps being in the same sentence with Chris Brown, Micheal Jackson, and OJ. Right? I mean, noone would lump those guys all together, right?