Mitt Romney is so full of shit!

How many lies can Romney pack into this one little 3-minute video clip? I think my favorite lie is that he's going to protect Social security and medicare by not raising taxes. That doesn't even make sense. Maybe you could say "I've figured out a way that we can protect SS and medicare without raising taxes," but you can't just say that not raising taxes is going to protect them. There's just no logic to it. It's like saying "I'm going to get all these home repairs done by not hiring any contractors."  You may well be able to get the repairs done without hiring anyone, maybe do them yourself, or con your friends into helping, but the act of not hiring contractors doesn't put a single shingle on the roof.

Also, there's the line about if you want someone who's going to raise taxes, you can vote for Barack Obama. Way to count on your audience being pig-ignorant enough to not know thatt Barack Obama has in fact NOT raised taxes. Pathetic.
,

Then there's this bit of classic douchebaggery:


Corporations are NOT people. They are made up of people. People own shares of the corporations, corporations are run by people, but corporations are not people. That's like saying that the NFL is a football team. And we know good and damn well whose pockets corporate profits end up in, and it ain't ours. Quit bullshitting us.
Posted by Professor Chaos at 9:51 PM 3 comments:

Two guys who have just blown their chance at the presidency


New Jersey Governor Chris Christie is defending his pick of a Muslim for a state judgeship, saying critics of a lawyer who represented suspects after the Sept. 11, 2001, terrorist attacks are “ignorant” and “crazies”

Ooh, sorry, Chris. The first requirement for winning the GOP primary is acknowledging the simple truth that ALL Muslims are evil and want to kill all of us and also make us follow Sharia Law and then kill us. You're out. And you were doing so well, you'd already passed the "arrogant, bullying prick" test.Oh well, better luck next time. 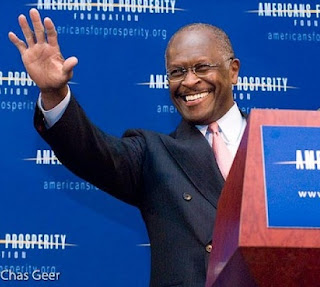 Republican presidential hopeful Herman Cain apologized to Muslim leaders Wednesday for comments he made about banning mosques and Islamic places of worship that he accused were sneaking Sharia law into the U.S.  . . After his meeting with the Muslim group in Sterling, Va., Wednesday, Cain said he was still against Sharia law in the U.S. but was "truly sorry" for offending any Muslim Americans.

“While I stand by my opposition to the interference of Sharia law into the American legal system, I remain humble and contrite for any statements I have made that might have caused offense to Muslim Americans and their friends,” Cain said in the statement.

Oh my Godfather's Pizza! What the hell were you thinking? A, you met with Muslims? B, you apologized to Muslims? Who are you, Barack Obama? and C, you admitted that you were wrong about something? You learned something? From Muslims? I don't know who you are anymore!


You two might as well have burned a flag while aborting a baby with your gay husbands!


Posted by Professor Chaos at 6:38 AM No comments: