Best Buy is Out To Get Us!

I'm really beginning to think that my theory from yesterday may be pretty right on. Just look how people are freaking out over a Best Buy ad! 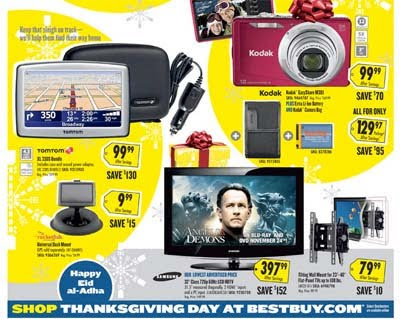 Do you see anything scary in this ad? 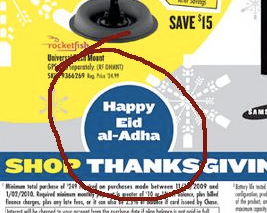 So this has the nutsos in a freaking uproar.

Check out some of the messages they are leaving on Best Buy's website:

I imagine that since you are celebrating a muslim holiday that commemorates human sacrifice to please Allah, that you will eventually print Merry Christmas on a weekly ad? Eid Al-Adha correlates to Nov 27-30, and I am okay wish wishing others a Happy Whatever during their respective holiday seasons. But if you cover one - you need to cover them all this Holiday Season - including Christmas.

I am thinking that if there is no Merry Christmas from Best Buy in an ad before Dec 25, that Best Buy will be losing my business.

Someone needs to tell the creatively named "Conservative" that Eid Al-Adha commemorates the day that God, the God in the Old Testament, The Old testament that is included in the Christian and Jewish Bibles, that God, told Abraham to sacrifice his son, then said "oh wow! You almost did it! I can't believe you fell for that! Seriously, though, don't kill your son, that just seems wrong."

So, it's not actually about human sacrifice, and the God in the story is Old Testament God (who is known in the Muslim world as Allah, known to the Jews as Jaweh, and known to Christians as God the Father)

So all of a sudden, this year you decide to be fair and acknowledge all holidays? or just eid aladha? Why is it that you didn't feel the need to acknowledge it in past years? Will you be celebrating all obscure ethnic/religious holidays or just this one? You insult all of the heros and innocent who died 911 by celebrating a holiday of the religion that said to destroy them! This PC crap is going waaaayyyy too far!!!

As a Christian, I am sick of being accused of being a racist, or bigot. We all know how this story ends--BB will decide to pull ALL references to religious holidays AFTER the have posted the ad in the current weekly.

BB, America, and Americans will be pushed into a corner only so long before they begin to leave your business in droves.

See, I really am beginning to think that these people actually believe that Best Buy is "Pushing them into a corner" by acknowledging a non-Christian holiday.
And to this guy, the term "Americans" clearly refers to non-Muslim people, but he can't see why anyone would find him bigoted.

And check out the comments of "Free Republic" which is organizing a boycott of Best Buy:

I am buying both a laptop and desktop for myself this year and will get one of my daughters (the oldest) a laptop. My youngest continues to be a disappointment so she will not be recieving much. Anyway, money is no object because the specs I demand are way up there. I will wait and see what stores are celebrating Christmas as Christmas. Hanahka I can understand, anything else and I do not give my store that business.

Besides being a dick of a father, this dude apparently has decided that acknowledging the Jewey holidays can be tolerated, but that is it! Tolerance has its limits!

BB is a Mpls company. Mpls is overrun with ragheads.

I assume that BB refers to Best Buy, and Mpls refers to Minneapolis? And the term "ragheads" refers to the bigoted mindset of Eric in the Ozarks. (don't forget impeachment!)

It is time to reclaim Christmas.

Reclaim Christmas? Eid al-Adha runs for three days around the end of November. Some years it may coincide with Thanksgiving, but never Christmas! So from whom or what are these people going to "reclaim Christmas"?

When I was young, people wanted to reclaim Christmas from the retailers who were using a religious holiday as an opportunity to sell stuff. Now these people are upset if retailers DON'T use Christmas as a marketing tool. There's just no pleasing them. They have some sort of psychological need to feel righteous anger. So they will always find something that they can think is oppressing them, or victimizing them, or taking Christmas away from them.

Wow! I’m surrounded! There is a Best Buy across one corner of my neighborhood, and a MOSQUE around the other! YIKES!

I think this Eid is the goat Throat Slitting Holiday. Last year it was 250 goats that gave their lives for this bit of holiday cheer.

So from this person's point of view, Best Buy, by wishing a happy holiday to Muslim customers, has, what, joined forces with the Mosque? And now they are surrounding Biker Buddy? Clearly in cahoots, plotting something nefarious!

To: Eric in the Ozarks
BB is a Mpls company. Mpls is overrun with ragheads.

I know you and I have discussed this before, but I want others to know you are not kidding. I haven't lived in the city proper for a few years now and have visited it less and less as time goes by.

Today we went to the Mall of America's Nickelodeon Adventure park for my son's birthday. Wow! At least a quarter or more of the ticket takers and ride operators were women in muslim garb. Ditto the clientele and workers in the stores. Women in headscarves at the Macy's and Bloomingdale's cosmetic counter, really?? It was amazing to me how much has changed in five years. We're "fully-stocked" here in the Twin Cities. Thanks bleeding heart, Scandinavian Lutheran social(ist) services.

Disclaimer: I'm Scandinavian and was raised Lutheran until the church left us.

Oh my God! They're Everywhere!
Muslim women working at Macy's? God knows what they're up to?
And somehow this is the fault of Lutherans? Let's get Garrison Keillor!

I really think that when these people see Muslims working in department stores just like "real Americans" it is somehow perceived as a threat. Somehow, if Muslim women can work at the same makeup counter as Scandinavian Lutheran women, that in some way diminishes the "real" American women. If American women are not given a higher status than Muslim women, these folks seem to feel like they are under attack. I don't get it, but i am going to work out the details of this theory. I think I'm on to something.