Marc Mezvinsky is a lucky SOB

Marc Mezvinsky is one lucky guy.

The man who's marrying Chelsea Clinton

And not just because Chelsea Clinton is easy on the eyes. And not just because she's Stanford-smart, which is like Yale-smart without the evil.
No, Marc Mezvinsky is one lucky guy because he will be the only married man in the US who can rest assured that Bill Clinton won't hit on his wife.
Posted by Professor Chaos at 7:05 PM 2 comments:

So Sarah Palin was in Washington State for Thanksgiving week, and the Tri-City Herald has this story:

Most of the story deals with the creepy, cultish behavior of her fans, but there was also this little detail:

Palin had announced on Twitter that she would be running the 5k race organized by the Benton-Franklin Chapter of the Red Cross.

She didn't finish the race, opting to leave the course early to avoid more crowds at the end. About 40 minutes into the run, word started trickling out to people gathered at the finish line that she was gone.

Seriously, Sarah? You can't even finish a frakin 5-K for charity?
And I could understand if you didn't finish because you were too tired, I probably couldn't run 5 kilometers either, but no - you quit because you didn't want to deal with all these regular American folks that you claim to love so much and to represent and to be one of.
Pathetic!

Even more pathetic, though are the Palin-worshipers who fawn over her everywhere she goes. The story in the Herald centers around creepy couple Cynthia and Gary Waddoups, who came to the 5-K just to bask in Palin's presence. No, really!

The Waddoupses have been watching Palin's Facebook page for announcements about her public appearances and upcoming Richland book signing. And it was all politics that drew them out early on the bitter cold holiday because "just being near her" was like a once-in-a-lifetime experience.

And what do you do when you finally get to meet your hero? 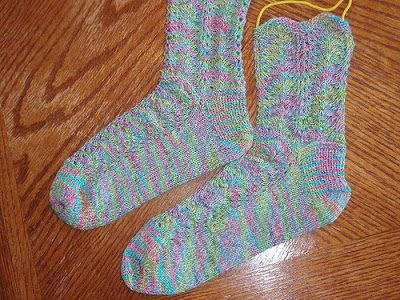 Socks? What the hell? You give her socks? Socks you found in Walla Walla?

So if I ever meet Keith Richards, I should present him with, what, some tighty-whiteys that I found in Kalamazoo?

she handed Palin two pairs of cashmere/wool socks she'd found in Walla Walla. One pair was for Palin's son, Trig, and she suggested the other pair could go to grandson, Tripp.

Palin immediately put the socks on Trig, then grasped Waddoups' hand and talked with her before moving on.

Good thing the baby is out in the cold morning air with bare feet.

"She was very nice," said Cynthia Waddoups. . . "That made our day," Gary Waddoups said of Palin. "Her reaction was so genuine. You wouldn't get that out of other people."

Right. No one else would pretend to like a crappy gift. Especially not someone with political aspirations.

But the thing that made me want to cry was this description of a button worn by another Palin fanatic:

. . . Thompson of West Richland, who wore a Rosie the Riveter pin with the words, "Women like Palin make America strong."

Yes, America is made strong by quitters.

Pathetic! Rosie the Riveter must be turning over in her grave. 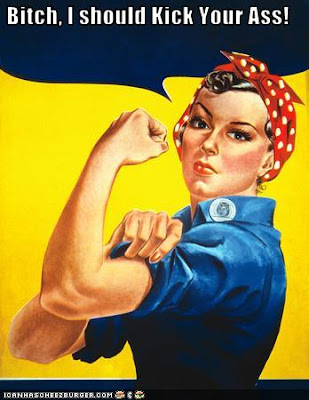 And yes, I know Rosie the Riveter is not a real person. But Norman Rockwell is probably turning over in his grave.