On Saturday morning the delegation from the Chaos Compound (Me and the Missus) went to the DNC Winter Meeting in downtown Atlanata, hoping to drum up support for Keith Ellison. 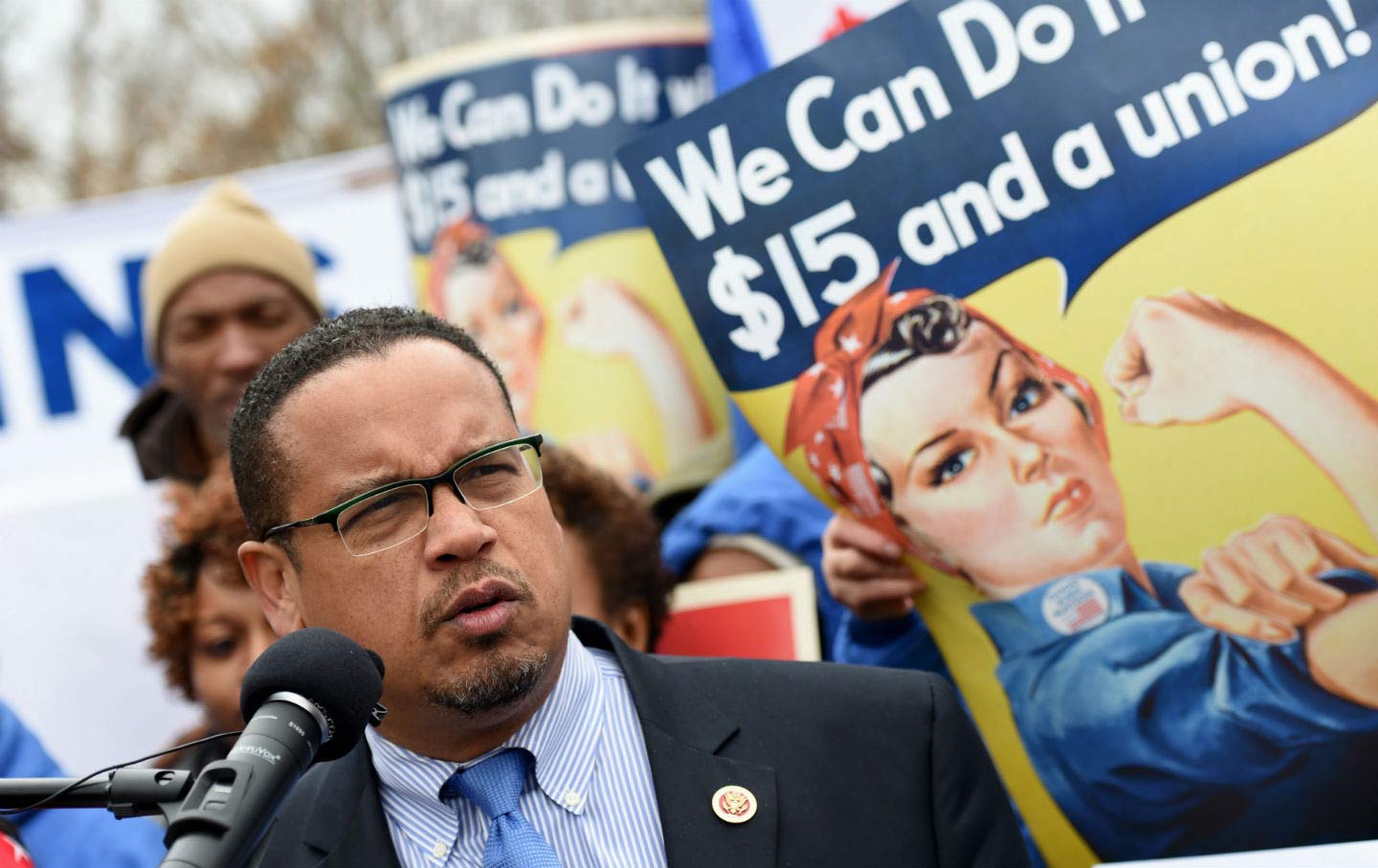 And if there were any questions about why Democrats keep losing, I think they were answered that day.

Donna Brazile opened the proceedings announcing the color guard from a local ROTC program. Then silence for a minute. "Um, is the color guard here?" Silence for another minute. "Okay, yeas they're here, please rise for the presentation of the colors." Silence. . . "Um, color guard? Are you. . .?" Eventually they made their way to the front, but Christ, she couldn't even get that to run smoothly.

Atlanta Mayor Kasim Reed was in attendance, and his presence was noted, but he was not invited to speak, which seemed like a pretty big snub considering he is the mayor of the host city. You'd think they'd at least have him do one of those "on behalf of the city of Atlanta, I would like to welcome you, blah blah blah. . ." kind of things. But nope. Nothing.

Then there was a debate over Resolution 33.

This was a proposal to re-instate President Obama's policy of not allowing the DNC to accept corporate money and not letting corporate lobbyists serve as "at-large" members. This was greeted with a great deal of enthusiasm by the attendees like ourselves who were not voting members. It was, of course, stricken from the by-laws. The opposition was led by some guy from California named Mullholland who stepped up to the mic and said something to the effect of "We're not the little sisters of the poor, we're the Democratic party."  This would have been an easy bone to throw to the grass roots, since not striking it down would have merely referred the by-laws in toto to another discussion committee where the proposal could have been killed quietly. But Democratic leadership isn't even smart enough to do that.

Then there was a video tribute to Donna Brazile who acted as if she had no idea this was going to be sprung on her **eyeroll**. The video played for about a minute, stopped, the screen went blank, then it started again from the beginning. As the Missus noted "it's hard to get competent tech people when you piss off all the millennials."

Then Donna Brazile read off a list of people she wanted to thank and said that without them, they never could have accomplished all that they had accomplished and everyone in our pro-Keith-Ellison section started chuckling and looking around saying "she thinks she's accomplished something?"

You just lost a race to the most beatable candidate in history. You lost the House and you lost the Senate. And you're talking about your "accomplishments?" This is why it's going to be so hard to make anything better, the higher-ups in the party refuse to learn a single goddamm lesson from losing. When you lose a race that the opposition party had pretty much gift-wrapped and handed to you on a platter by nominating an unstable buffoon, a cartoonish blowhard, an admitted sex offender, and a man with absolutely zero qualifications to hold public office as your opponent - when you somehow manage to lose that race and you think "ah, time to rest on my laurels!" nothing is ever going to get better.

And if she had talked about her "accomplishments" and the other DNC members had laughed or heckled or booed, I might have some reason for optimism, but no. They applauded politely as if what she was saying made some kind of sense in their world. It was appalling.

Then they chose the DLC-affiliated Tom Perez as the new DNC chair, because apparently they're just fine with the job done by Brazile, Wasserman-Scultz, Kaine, etc. The only encouraging news was that it took a second ballot, and the vote was pretty close, so there are at least a sizable minoroty among the voting members that seem to have some sort of clue as to how to move forward.

Oh, and the vote took forever because the hand-held clickers that they were using to record votes didin't work right and they eventually had to switch to paper ballots. I forgot to mention that at the very beginning, members were to press a button on the clicker to record their presence so that a quorum could be established. That took forever and several members never did get their presence recorded because the most simple technology is apparently beyond the grasp of the party that, as the Missus says, pushes away the young people.


That afternoon, we participated in a "save the ACA" march. We marched past the convention center where the DNC meeting was still going on, and the hotel where the DNC bigwigs were staying, shouting and chanting and whatnot. It would have been an easy thing for someone, say Tom Perez?, or anyone to come out of the convention center and address the assemblage. Just tell us that you hear us, you understand, you intend to fight, just basic boilerplate stuff would have gone a long way. But did anyone come out? Haha, no. Of course they didn't.

And that is why we keep losing.