This is supposed to be scary?

So, I guess this map has been making the rounds of the so-called "news" programs lately.

Maybe ISIS really does have a 5-year plan for re-conquering the Ottoman territories. So what? Anyone can make a plan for world domination. These guys did it every week:

At the Chaos Compound, we make plans to take over Europe every couple of days, and yet we still live here in Atlanta, and not in Versailles.

So what if they have some stupid plan for taking over the Mediterranean. Does anyone seriously think they have any chance of pulling it off?

It's one thing to walk in to the fucked-up power vacuum of a shambles of a country like Iraq and take over (and they have yet to pull that off), but who really thinks that this rag-tag bunch of Medieval thugs would stand a chance of taking over a rich, well-organized country like Saudi Arabia? Let alone Spain or Greece?

So why are we pretending that this is serious? Could it maybe be that the agenda of the American media id possibly being driven by folks that would love nothing more than to involve us in another pointless war? Because maybe war is good for ratings? And maybe some of their sponsors maybe make tons of money off of military contracts? Or maybe even the companies that own the networks also might make monies off of military contracts?

Or are we really supposed to be scared that these guys are capable of world domination? 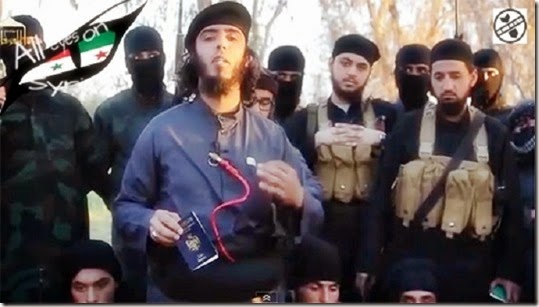 Oh, and by the way, Che Guevarra called, he wants his look back.