The Kids Are All Right


So, anyone who has been paying attention the last few years knows that the young people of America, God bless 'em, are increasingly leftist.

for example, there was this Harris poll done last Spring:

Generation Z has a more positive view of the word "socialism" than previous generations, and — along with millennials — are more likely to embrace socialistic policies and principles than past generations, according to a new Harris Poll

Then there's this survey from January:


So, naturally you'd expect to see lots of articles about the political leanings of today's youth. Like, for instance, this one:

Seriously? What dempgraphic group are we talking about then? 18-year-pld trust-fund kids? 18-year-old inbred hillbillies? 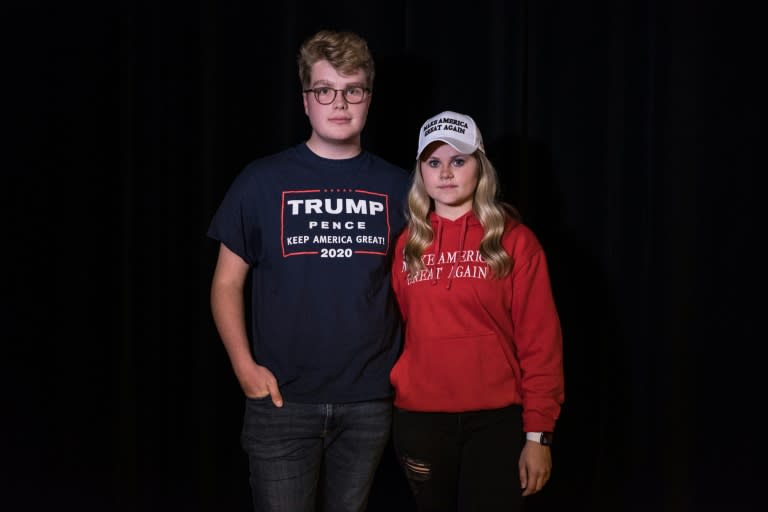 Clay Danec and Olivia Myers, both 18 years old, are ready to vote for Donald Trump in next year's presidential election

No. They can't possibly be just referring to these two kids, right? Surely these two are representative of some larger group, right?


Columbus (AFP) - They like his straightforward speaking style, his policies on immigration and the economic boom achieved during his administration.


They are still teenagers, or just past 20.
In a year from now, they will vote in their first presidential election in key swing state Ohio -- and they're giving Donald Trump their support.


Clay Danec and Olivia Myers, both 18, have more or less known for a while whose name they would check off in the voting booth.

First of all, you're just going to assume the premise that there has been an economic "boom" that was "achieved" by Trump?

And I can't thionk of any prominent political figure with a less straightforward speaking style!

It’s disgraceful. I’m gonna maybe – and I’m looking at it very seriously, we’re doing some other things as you probably noticed like some of the very important things that we’re doing now. But we’re looking at it very seriously because you can’t do that. You can’t have what’s happening – where police officers are getting sick just by walking the beat. I mean they’re getting actually very sick, where people are getting sick, where the people living there are living in hell too – although some of them have mental problems where they don’t even know they’re living that way. In fact, perhaps they like living that way. They can’t do that.

You might want to point out that when they say that they like his "straightforward speaking style" thet are being completely fucking delusional.

Also, we're talking about two kids in Ohio. Let's not pretend this is some kind of a movement.


After attending an event in the state capital of Columbus organized by the conservative group Turning Point USA, the students, who attend a Christian high school, are even more convinced about their choice.


Myers -- sporting a Make America Great Again hat and hoodie -- says she was raised in a "conservative" family, but didn't want her upbringing to be the deciding factor.


"I've been kind of searching both on the left and right side and I've made the decision for myself that I'll be voting conservative in 2020," she told AFP.

That didn't happen. No one sets out with an open mind to examine the ideas of the left right and center, peruse the policy prescriptions of various candidates and then comes to the conclusion that "my parents are right. The syphilitic racist orangutan with fascist leanings who grabs women by the p***y and openly lusts after his own daughter really is the best choice to lead our nation." The only way you land on MAGA is you believe the bullshit that's been fed to you by your right-wing parents, your right-wing Christian high school, and Turning Point USA. Or, you're just a huge enough racist to support any senile misogynistic clod who is willing to call immigrants "animals."


For Danec, who is wearing a Trump reelection campaign tee-shirt, the main issue is one of "values and moral beliefs."


See, now at this point, you might want to point out that Sanec clearly does not know the meaning of the word "values," nor of the word "moral" or he probably wouldn't be supporting a thrice-married serial adulterer who boasts of barging into the dressing rooms at Miss Teen USA, has been credibly accused of sexual assault by dozens of women and makes no secret of his desire to fuck his own daughter. And who has made oa career of lying, cheating, and stiffing everyone with whom he does business.


"I come from a family that worked really hard to get up the ladder," explains the baby-faced teen as the crowd exits an auditorium at Ohio State University.
"The fact that Trump supports families that can keep making good money, and not having to tax us and penalize us for being able to work hard and sustain our family, I think it is really important."

Now, as a journalist, you might want to research the Danec family to see how hard they really worked to get up the ladder, because there's a better than even chanvce that no one in this family has broken a sweat outside the gym foir a couplke of generations. Also, you could point out that no one has proposed penalizing anyone for "being able to work hard" or for "sustaini[ing] their family."


While it is, at least on paper, not formally linked to the Trump campaign, Turning Point -- which says it is active at more than 1,500 universities across the country -- is behind the president.
It has organized a barnstorming "Culture War Tour" this autumn in swing states from Florida to Nevada, to drum up support for the Republican incumbent among young voters.


You might also want to point out that this "movement" of conservative youth, far from being an organic response to real-world events and conditions, is being spearheaded by a Koch-brothers-funded astroturf group with an unlimited supply of money to travel to college campuses to propogandize the youth.

You also could maybe profile some young people who are involved in the re-election efforts of Alexandria Ocasio-Cortez, Ilhan Omar, Lucy McBath, Rashida Tlaib, or Ayanna Presley.
Maybe some of the young people trying to get Bernie Sanders or Elizabeth Warren into the White House. Because there a re a lot - A LOT - of young people involved in these campaigns. Here in Georgia, we met a bunch of young kids volunteering for Stacey Abrams. And a bunch more working for Sanders' campaign,. Why not intervies some young, fresh-faced DSA members? They're not hard to find, just check Twitter. The youth, the future of the country, are overwhelmingly left of center, with a large percentage being actual leftists. And no matter how many articles you guys choose to trot out there about "conservative kids" or "Trumpler Youth," the future is coming. I just hope I live long enbough to see these kids take over.