A disgusting response to a despicable act.


Erick Erickson may have had the most revolting reaction to the Planned parenthood terror attack in Colorado:

The Most Surprising Thing About the Colorado Springs Shooting

This past Friday, a lunatic who lived in a shack with no running water or electricity killed three people in Colorado Springs, CO. He wound up going into a Planned Parenthood facility. Three people were killed. None of those were abortionists or patients. A pro-life Christian preacher/police officer was one of the victims.

And since the gunman didn't ask for identification to see who were the doctors and who were the patients and just shot at everyone who was in the Planned Parenthood clinic, clearly that proves that this had nothing to do with abortion. Guy just wanted to shoot people, I guess. Go figure.


At 3:30pm on Friday, while the facts were shifting and things were still unknown, I was already getting emails from leftists blaming me, my rhetoric, RedState, talk radio, Center for Medical Progress videos, etc. for the killings. Again, at that time the facts were still unknown and even now a lot of facts are unknown. The man was neither a church goer nor a pro-life activist. He was a lunatic.


He was a "lunatic" who said "no more baby parts" when being taken into custody. His motivation is NOT 'unknown." And he was clearly inspired by the fraudulent, deceptively-edited videos from "center for Medical Progress" and all the figures on the right who have been disingenuously bleating on about PP supposedly selling baby parts.

But the left had its narrative. It had been searching for a moral equivalence since Paris and could not resist the fundraising opportunity to claim pro-life Christians were even a bigger threat than muslims. After all, according to the left, if someone shoots up a Planned Parenthood facility, it is proof that all Christians are one degree away from a terrorist related rampage. But when a Muslim walks into a place screaming “Allahu Akbar,” it’s just workplace violence.

No one said that. No one has ever said any such thing. No one has ever said that any of the many acts and threats of violence directed at abortion providers is any sort of indication of the temperament of "all Christians." Everyone knows that the set "All Christians" contains everyone from Scott Roeder and Tim McVeigh to Jimmy Carter and Mother Theresa. You are just lying.
And no one has ever claimed that acts of terrorism committed by Muslim fanatics are "just workplace violence." I know that's a thing on the right, to claim that Barack Obama said that about the Fort Hood shooting, but the thing is, he never said that. The official reports from the military classified the murders as "workplace violence" because they had to check off a category and there wasn't a box marked "killed by domestic terrorist" because that had never happened on an Army base before. No one was trying to downplay the seriousness of the Fort Hood murders. But you knew that, you're just being a lying sack of shitweasels again.


Oh, and also, there is a moral equivalence between gunmen who murder in the name of Allah and gunmne who murder in the name of Jesus. They're both twisted, depraved terrorists and this scumbag in Colorado does not represent Christianity any more than the gunmen in Paris represent Islam. No one has to "search" for a moral equivalence. It's right out there in plain sight. .

Now, up until this point this is just typical Erick Erickson right-wing dissembling bullshit. But now it's about to get really shocking:

There is one surprising thing about the Colorado Springs shooting at the Planned Parenthood clinic. It is that it is a rare event.

A) violent attacks on abortion providers really aren't all that rare, and
B) The rareness is surprising to you? Are you saying what it seems like you're saying? Are you saying "geez, given the constant incitement to violence being spewed out on right-wing airwaves and websites, it's really surprising that more members of our unhinged, unstable audience doesn't commit murder against the people we constantly demonize and vilify." Cuz that's the only reason I can think of that you'd be surprised by the relative rarity of these attacks.

Okay, hold on a second here. You're saying 8 killed and 17injured. But those aren't the number of attacks, those are the numbers of casualties. According to the National Abortion Federation: "There have been at least 73 successful attacks on American abortion clinics since 1997. Forty of those acts of violence were arson attacks, including four in 2012. There have also been 20 attacks aimed at abortion providers themselves with different weapons, either shootings, stabbings, or acid attacks."
So, even if your numbers are correct, they're intentionally misleading. Just because these "Army of God/Operation Rescue" types aren't very good at violent attacks doesn't mean they aren't trying them.

It really is surprising more Planned Parenthood facilities and abortionists are not being targeted. It speaks to the pro-life movement being faith based and turning to their better angels.


Surprising? You mean disappointing?
And which "better angels" told someone to throw acid at abortion doctors 19 times in three states in 1998? Which "better angels" came up with the idea to commit seven arsons in 1999? (source) If those are the better angels, I'd hate to meet the worse ones.

The left is desperate to compare the American pro-life movement to terrorists. They damn well better be glad Christians follow a faith that tells them to honor and pray for their leaders, follow the law, love everyone, and let the state and not the individual act as the sword bearer for God.


What the fuck?
Jeezus, I don't even know where to begin with this shit. Honor and pray for their leaders? You mean like the president of the United States? When has anyone in the "pro-life" movement, or in any of the subsets of the Conservative movement ever honored President Obama?
I know there have been some pro-lifers praying for him:

n 2009 Pastor Anderson told his congregation that his disdain for the President wasn’t because of Obama’s policies, but that he actually hated Obama himself.  He said that he prays every night that President Obama will die and go directly to hell.


“And I’m going to tell you something. I hate Barack Obama. You say, well, you just mean you don’t like what he stands for. No, I hate the person. Oh, you mean you just don’t like his policies. No, I hate him.”
“And you’re going to tell me that I’m supposed to pray for the socialist devil murderer infanticide who wants to see young children and he wants to see babies killed through abortion, you’re gonna tell me I’m supposed to pray for God to give him a good lunch tomorrow when he’s in Phoenix, Arizona. Nope, I’m not gonna pray for his good. I’m going to pray that he dies and goes to Hell…When I go to bed tonight, Stephen J. Anderson is going to pray for Barack Obama to die and go to Hell.”


Wiley Drake Prays For Obama's Death
Submitted by Kyle Mantyla on Thursday, 6/4/2009 4:39 pm
The other day I noted that Wiley Drake, Alan Keyes' vice-presidential running mate, had declared that George Tiller's murder had been the answer to his "imprecatory" prayers.
Now Drake has proclaimed that he is likewise issuing such prayers against President Obama in hopes that he also dies:
A former Southern Baptist Convention officer who on June 2 called the death of abortion provider George Tiller an answer to prayer said later in the day he is also praying "imprecatory prayer" against President Obama.


Oh, and "follow the law?" You mean other than the laws against murder, arson, assault, making terrorist threats, bombing, vandalism and blocking access to clinics? Other than that, yeah your movement is really big on law-following. Oh, and it goes without saying that you looooove everyone! 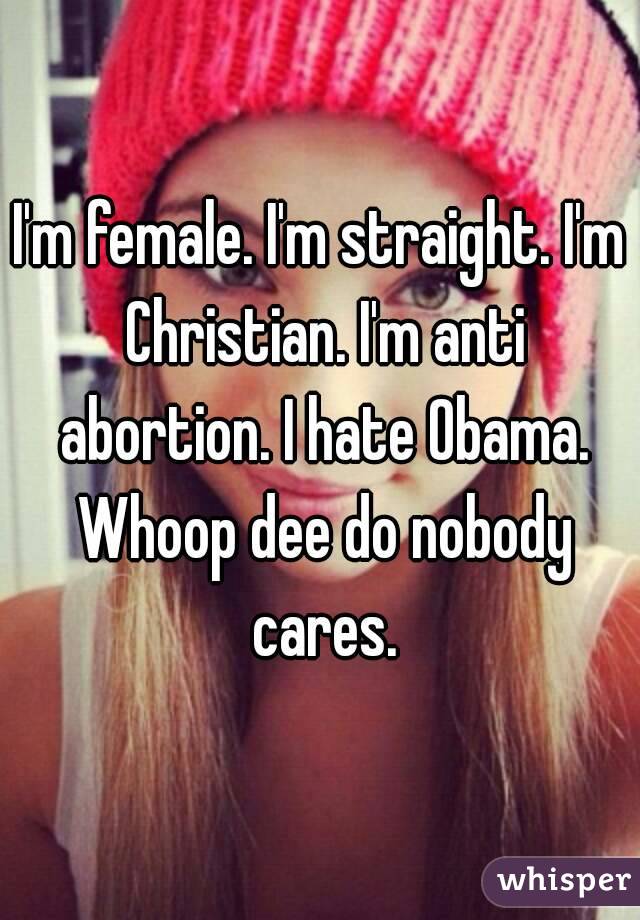 The pro-life movement is most typically represented by men like Garret Swasey, who though pro-life and Christian, worked as a police officer to save lives in Colorado Springs, CO.


No. No it is not. The "pro-life" movement is most typically represented by the people who block the sidewalk in front of clinics and scream "baby killer!!!" at women going in.


Cecile Richards is about the closest we have come in the United States to Joseph Mengele. Under her leadership at Planned Parenthood, doctors have been killing children and harvesting the children’s organs. In some cases, the children are born alive. In some case, whole children are born and then carved up.
This has all been caught on tape repeatedly. The media and left would prefer you ignore it. They’d prefer you believe the tapes were altered, edited, or fabricated. But we should not be ashamed of speaking the truth. It is the truth that Planned Parenthood sells baby parts and its employees were caught on tape talking about the value, the sale, and the altering of abortion procedures to preserve organs for sale.
Planned Parenthood butchers millions of children.

A) None of that is true. The videos have been exposed as fraudulent. Several red states have launched investigations of PP and none have been able to find any wrongdoing.
B) Comparing someone, anyone, to Mengele is the sickest type of character assassination imaginable. It's beyond despicable and maybe even slanderous.
and
C) this is the type of rhetoric that gets people like this Colorado Springs "lunatic" to act out violently.

Given the public light shed on the atrocities committed by Planned Parenthood and both the government and media’s turning a blind eye to it, dismissing it, laughing it off, or lying about it, it really should be surprising that Americans convicted of the need to stop the murder of children have not taken the law into their own hands.

But it's not the law. The law says that abortion is legal and donating fetal tissue to research facilities is legal. So when a pro-lifer commits acts of terrorism against Planned Parenthood, he is doing the opposite of taking the law into his own hands. Taking the law into your own hands is like hunting down the guy who shot your brother and killing him like in an old western. What you're talking about is just murdering people that have a different point of view. And the more that you say how surprising it is that there aren't more of these killings, the more it sounds like you're encouraging them.  Especially when you spin these lurid fantasies of children being butchered like the cover of "Yesterday and Today, " and tell your demented readership that the law is powerless to stop the alleged slaughter of innocents and boy, isn't it surprising that there aren't more people willing to stand up and fight these monsters? You have blood on your hands, you know it, and I'm guessing that you don't care.


PS for our younger readers:

PPS:
Going to California for a few days to visit family. Regular blogging should resume mid-week.
Posted by Professor Chaos at 8:29 PM 5 comments: