I Am Shocked, SHOCKED!

Dr. George Rekers, seen here being totally not gay at all.

Who's George Rekers? Oh, only the co-founder of the horrible awful Family Research Council, the James Dobson group that throws the annual "Values Summit" in DC.

So, apparently, George Rekers hired a young man from the website RentBoy.com (link is not safe for work unless your job involves some sort of sex-for-money arrangement, then go right ahead!)

Anyway, Rekers hires a young man from a homosexual gay male prostitute escort service -- not for sex, of course, but to help him carry his luggage. Because why would he hire a male prostitute for sex? That's just silly. Most prostitution involves schlepping luggage. And by luggage, of course, I mean penis.

Of course, Georgie has noooo idea that Rentboy.com supplies male escorts for non-luggage-carrying activities! I mean, how would you know?

So, someone sees the happy couple, I mean employer and baggage handler, arrive at the Miami arirport and tips off the Miami New Times. (full story here)

Reached by New Times before a trip to Bermuda, Rekers said he learned Lucien was a prostitute only midway through their vacation.
Boy, that must have been awkward! "You mean you're not "handling my baggage" for free?"

"I had surgery," Rekers said, "and I can't lift luggage. That's why I hired him."
Oh, well that clears it up! Although, if this picture is any indication, Dr. Reker was really not getting his money's worth: 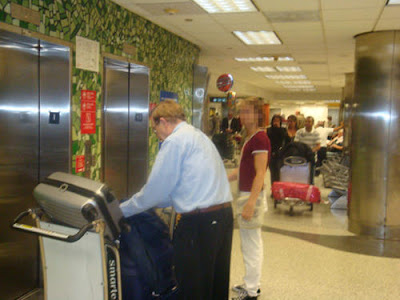 Yet Rekers wouldn't deny he met his slender, blond escort at Rentboy.com — which features homepage images of men in bondage and grainy videos of crotch-rubbing twinks — and Lucien confirmed it.

I know when I'm looking to hire a laborer, I usually ask the guys out in front of Home Depot to demonstrate their crotch-rubbing ability. You know, to make sure they're strong enough to handle the heavy lifting (if you know what I mean).

So, ordinarily, if a middle-aged guy wants to hire a man-whore and the man-whore is willing, I say go for it. More power to you. But I was shocked, SHOCKED!! to find out that George Reker is ". . .an officer for NARTH, the National Association for Research & Therapy of Homosexuality, a pseudo-scientific group that disseminates anti-gay disinformation disguised as research; and a researcher for the American College of Pediatricians, which, despite its legitimate-sounding name, has been described as a “phony medical group attempting to peddle anti-gay propaganda to schools.” (source)
A professional gay-basher caught with a male hooker? Well, now I've heard it all!

A quick Google search for this NARTH group turns up all kinds of bullshit like this:

We believe that clients have the right to claim a gay identity, or to diminish their homosexuality and to develop their heterosexual potential.

The right to seek therapy to change one's sexual adaptation should be considered self-evident and inalienable.

Sure. I also have the inalienable right to go to the North Pole looking for Santa Claus, but I ain't gonna find him. And any sane person would try to dissuade me from trying.

When schools offer information on sexual orientation, the facts should be presented in a fair and balanced manner.
(Just like FOX!)

Groups such as the American Psychological Association currently recommend that schools censor all "ex-gay" materials, and prohibit discussion about those who have chosen to change their orientation.

(Also, those damn doctors recommend we don't teach about trephination or the benefits of bloodletting!)

Respect for diversity, however, requires teaching about all principled positions. We live in a multi-cultural society where tolerance for differences is essential.

Oh, the respect! The tolerance! How beautiful. I'm almost afraid to look at what I know is probably coming up next. . .

And when homosexuality is discussed, it must not cross the line into lifestyle advocacy

.
Dammit. I knew it. Tolerance of differing viewpoints is one thing, but we can't let gay kids think that it's okay that they're gay! They need to feel enough guilt and shame that they might get desperate enough to seek out our "conversion" services.

"Tolerance and diversity" means nothing if it is extended to activists and not traditionalists on the homosexual issue.

Tolerance must also be extended to those people who take the principled, scientifically supportable view that homosexuality works against our human nature.

We must be tolerant of the intolerant.

Who will continue to be intolerant of the tolerant.

Numerous examples exist of people who have successfully modified their sexual behavior, identity, and arousal or fantasies.

Also numerous examples exist of people who have reported seeing Bigfoot, being abducted by aliens, or having esp.

And then goes full-tilt-totally-not-gay-just-Christlike mode:

Like John the Baptist and Jesus, I have a loving Christian ministry to homosexuals and prostitutes in which I share the Good News of Jesus Christ with them (see I Corinthians 6:8-11).

And if you're going to preach the Gospel to a prostitute, you really should take him on a European vacation and have sex, I mean, um, Biblical discussions with him to make sure the message really sinks in.
(And by "message", I mean weiner and by "sinks in" I mean, you know. .)

By the way, if you want to be like Jesus, you could, and I'm just throwing this out there, but you could try following his example of never once mentioning gaiety or condemning the gay people or saying anything at all ever about gayness at all. Just a thought.

I have spent much time as a mental health professional and as a Christian minister helping and lovingly caring for people identifying themselves as “gay.”

What a coincidence! So have the fellas on "RentBoy.com!"

My hero is Jesus Christ who loves even the culturally despised people, including sexual sinners and prostitutes. Like Jesus Christ, I deliberately spend time with sinners with the loving goal to try to help them.

And I can't be like Jesus if their aren't culturally despised people, so I go that extra mile to be sure that parts of the culture do despise the luscious young muscular gay men that, um. . . what were we talking about?

You can see the entire response here: Joe.My.God.

So now I'm kinda hoping that we get a new slang term out of this, ala "hiking the Appalachian Trail." Maybe it would go something like "Oh, check out that stud. I'd like to carry his luggage!" Or maybe "I'm calling one of those escort services, I'm desperate to get my baggage handled."
Or "do you know how long it's been since anyone's schlepped my suitcase?"