Why do they keep letting him do interviews?

I'm sure I'm probably about the 5 millionth person to comment on the interview tRump did with the Economist, but holy shit, that was fucking nuts!


It's bad enough his handlers let him do interviews with soft-headed lunks like the Fox & Friends crew, but this is the Economist. You have to know how far out of his league he is here, right?


Actually, I guess they did know, because they sent a couple of what passes for ringers in this administration to try to help him through it.


DONALD TRUMP, the President of the United States, along with Steve Mnuchin, the treasury secretary, and Gary Cohn, the director of the National Economic Council, sat down for a conversation with editors from The Economist on May 4th, 2017.

Ladies and gentlemen, the A-team!

What is Trumponomics and how does it differ from standard Republican economics?
Well it’s an interesting question. I don’t think it’s ever been asked quite that way.

Really? Are you sure it's never been asked in that obvious straight-ahead way before?
Oh, I bet he means no one's ever asked him that question with an English accent before!


But it really has to do with self-respect as a nation. It has to do with trade deals that have to be fair, and somewhat reciprocal, if not fully reciprocal. And I think that’s a word that you’re going to see a lot of, because we need reciprocality in terms of our trade deals.

Someone got a word-a-day calendar!


Okay, let me see if I got this. You're all for "free trade" and also all for "fair trade" two concepts which are mutually exclusive. Also, the the "free-traders" get upset about a 10% import tax, but they have no complaint about a 62% or 47% tax? Have I got this right?

Or would it be fair to say that you just think "reciprocal" is a magic word that makes everyone approve of whatever you do?

So that’s the story. It very much has to do with trade. We have so many bad trade deals. To a point where I’m not sure that we have any good trade deals. I don’t know who the people are that would put us into a NAFTA, which was so one-sided. Both from the Canada standpoint and from the Mexico standpoint. So one-sided. Wilbur [Ross, the secretary of commerce] will tell you that, you know, like, at the court in Canada, we always lose. Well, the judges are three Canadians and two Americans. We always lose. But we’re not going to lose any more. And so it’s very, very unfair.

**sigh** You don't know, do you? You have no idea how your economics differ from standard GOP economics, do you?

Who was it that set that time limit? Who was the fool that said he was going to do this in the first 100 days? Who was that guy? I can kinda picture him. . . orange skin, bad combover, tiny hands. . . Oh well, whoever it was was certainly a dolt!


Another part of your overall plan, the tax reform plan. Is it OK if that tax plan increases the deficit? Ronald Reagan’s tax reform didn’t.


Oh, fuck! I take it back. This idiot is definitely in tRump's league if he thinks Reagan's tax policies didn't increase the deficit.


But beyond that it’s OK if the tax plan increases the deficit?
It is OK, because it won’t increase it for long. You may have two years where you’ll…you understand the expression “prime the pump”?
Yes.We have to prime the pump.
It’s very Keynesian.
We’re the highest-taxed nation in the world. Have you heard that expression before, for this particular type of an event?
Priming the pump?
Yeah, have you heard it?
Yes.
Have you heard that expression used before? Because I haven’t heard it. I mean, I just…I came up with it a couple of days ago and I thought it was good. It’s what you have to do.


For God's sake, he just told you that he has heard that expression before. You can't turn around and say you just made it up!  I mean, I guess you can. You just did, but Jeezus, you look like an idiot when you do that.

But let's go back to something you just said a moment ago: "we're the highest-taxed nation in the world." Yeeeeeah. . . not so much.
I mean, we totally are unless you count Australia.
And the UK
And France, Portugal, Belgium and Spain.
But other than that, we're the highest taxed country in the world other than Japan.
And Finland.
And the Czech Republic.
And Denmark, Greece, Canada Switzerland and one of the Koreas.
But we're definitely taxed more than Germany and Poland. So there's that. 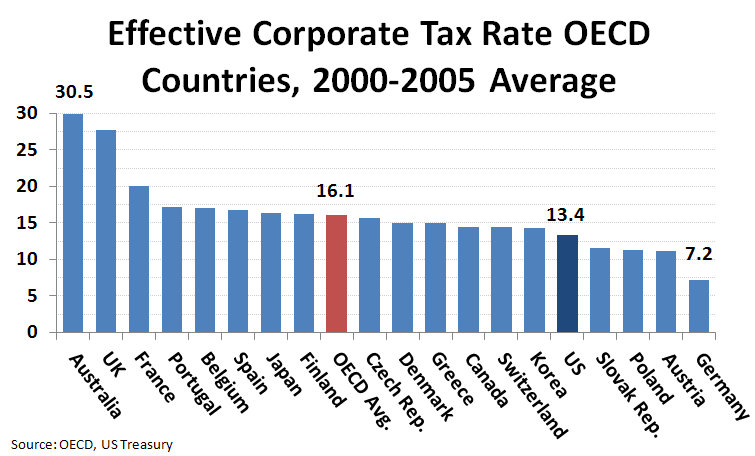 So you would have a bigger deficit, a stimulus, to prime the pump that would lead to faster growth?
So I happen to think that 3% is low. But you can’t do it if your companies are leaving the country because taxes are too high.


Or, and hear me out here, I'm just spitballing, but maybe they leave the country because they can pay Third-World workers starvation wages, have no safety or environmental rules and can have employees arrested for saying the word "union" out loud?


I don’t know if you saw what’s happening. Ford has announced massive expansions in the United States. General Motors cancelled a big plant in Mexico and a big plant in Europe. They’re all cancelling plans because I told them, I said…I get along with them great. But I said, “Look, we don’t mind if you leave the country. You can build all you want out of country, I hope you enjoy your plant. But when you build your car, you’re going to have a 35% tax when you bring it back in.


And they were all so impressed with me that they went back in time and put these expansion plans on the books during the Obama Administration!


So I mean, I have, it has, I haven’t been given massive credit for it yet, but I have been given some because I just see polls out in Michigan and different places, that really are affected by this, have been unbelievable, you know, much bigger than election day.


Um, any polls that show you gaining popularity in Michigan are #FakeNews. I haven't been able to find a single one. It may be that your handlers are making up fake poll numbers to keep you from sulking.


The other thing, just in case we…I believe it could be anywhere from $4trn to $5trn outside, you know don’t forget we’ve been talking about $2.5trn for four years now. I’ve been using $2.5trn, the same number we’ve all been using for years. Well, you know, it grows. I think it…I wouldn’t be surprised if it was $5trn but, you know, we’re close. We’re letting that money come back in. And that has two barriers which you have to watch. It’s got a barrier of the tax, which we will take care of. We’re going to make it 10%. Now it’s 35%...
Sorry, 10%? The repatriation taxes?


You know the interview is going well when the reporter has to hazard a guess as to what the fuck you're babbling about!


Sorry, 10%? The repatriation taxes?
The repatriation. Inversion. The corporate inversions, which is a disaster, with the companies leaving. But they want to bring back their money. Number one, the tax is too high but the other thing that’s too high is the bureaucracy.
Mr Mnuchin: Correct.
President Trump: I have a friend who said even if you wanted to bring it back in you can’t because you have to go through so many papers, so many documents, so many…
Mr Mnuchin: We’re going to make it simple
President Trump: You have to do…Steve, they told me you’ve got to sign books and books of stuff, you pay millions of dollars in legal fees and they almost don’t allow you to bring it back in.


So some guy I know said this and I have absolutely no reason to think he might be exaggerating or bullshitting or maybe doesn't know what he's talking about or maybe is a guy that I made up who doesn't exist. But I'm sure he's right. Anyway, it's not like I have access to the tax codes or to any economic experts who could explain them to me or anything. It's not like I could just call the IRS and ask them to send someone over to walk me through the actual process. I'm just a humble, ordinary private citizen who. . . I'm not? Really? The President? Of what? America? Hoo boy, we're all in trouble!


I just love this idea that these CEOs are hiding all this money in offshore tax havens because, while they'd love to bring it back to their country, it's just too darn complicated! How could these simple salt-of-the-earth businessmen ever figure out how to move money back into the US? I mean, moving it out of the US sure - any fool could transfer profits to a shell company with a subsidiary in the Caymans while re-assigning all expenses and losses to the American parent company. That's what we pay the bean-counter for! But bringing it back? My God, you should see all the paperwork!


Oh my God, this interview keeps going and going and I can't take any more! Maybe I'll pick this up tomorrow.