WASHINGTON - In its first campaign-finance decision since its 5-to-4 ruling in the Citizens United case last year, the Supreme Court on Monday struck down an Arizona law that provided escalating matching funds to candidates who accept public financing. 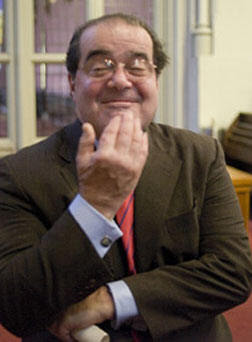 Wow! So the same judges who just ruled that money = speech are against a law that would provide more speech because um, I don't get it. What exactly is the problem with having more speech. I thought speech was good?

The vote was again 5 to 4, with the same five justices in the majority as in the Citizens United decision. The majority said the law violated the First Amendment rights of candidates who raise private money. Such candidates, the majority said, may be reluctant to spend money to speak if they know that it will give rise to counterspeech paid for by the government.

Jeezus! So it's not enough that one candidate has more money, he also gets to prevent his opponent from getting more? And since when is making someone "reluctant" to "speak" the same thing as infringing on his right to speak? The Scalia wing of the court will do all manner of impressive mental gymnastics to make the law fit the decision they want to make. Rather than looking at the law, weighing the arguments pro and con and then arriving at a decision, they seem to begin with a decision, then try to figure out how to make the law agree with that decision.

Okay, we all agree that we hate public financing of elections, right?

Oh, sure, yeah! Really inhibits the corrupting influence of zillionaires!

So, we're agreed that we'll strike down this law,
now what principle can we twist to justify this decision?

I dunno, freedom of speech? We could say that giving one candidate the ability to have more speech is actually taking free speech away from the other candidate?

Bra - Vo!
Well done, Mr. Scalia. Make it so.
And set a course for happy hour.
I'm pretty sure it goes something like that.

Also, Carol Channing, because why the hell not?
Posted by Professor Chaos at 9:25 PM 1 comment: