They've finally done it. The wingnut right has finally found their excuse to take up arms against the government of the United States of America. They've been threatening a "new Civil War" or a "new Amercican Revolution" for about 6 years now, and this weekend they finally found the martyr behind whom they could rally.

Surprisingly, the martyr is just some moocher asshole who thinks he can pick and choose which laws apply to him and which don't because he doesn't like them.

Cliven Bundy has been grazing his cattle on Federal lands for decades. Which he is certainly allowed to do, except that at some point, he just decided to stop paying the required fees. Why? Mainly because he is an asshole. But also because he has some convoluted theory that since his ancestors grazed cattle on those lands since the 1800's, he should somehow be allowed to use these lands, owned by the American people, for free. Because, like most anti-government extremists, he has no problem taking free stuff from the Federal Government that he hates so much, and for which he has no need, but they should provide him free grazing land because, um. . . 'Murica!

“My forefathers have been up and down the Virgin Valley ever since 1877. All these rights I claim have been created through pre-emptive rights and beneficial use of the forage and the water. I have been here longer." 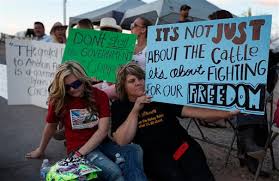 The freedom to use Federal lands for free, apparently.

Bundy apparently thinks he does not owe any monies to the dang guv'mint, and also claims that he has tried to pay the monies to the local county government which does not own the land, does not manage the land, has no claim to the land, and really wants no part of this.

And he said this:


Bundy is also making sure to remind everyone that he is not opposed to Second Amendmenting his way to a resolution of his legal troubles. In 2013, he told the Las Vegas Sun that “he keeps firearms at his ranch” and is willing to “do whatever it takes” to protect his property. He added that “I abide by all state laws. But I abide by almost zero federal laws.”


Because nothing says "patriot hero" like a dumb fuck redneck who refuses to follow his nation's laws.


I told you that I did the legal thing and the political thing and the media thing and it seems like it’s down to we the people if we’re going to get it done. You know the things like militias. You know, I haven’t called no militia or anything like that, but hey it looks like that’s where we’re at. We got a strong army here, we have to fight, their [unintelligible] to back off.


of course, he absolutely did not do the legal thing, I have no idea what "political thing" he is referring to, and whether or not he "called no militia," the militia has arrived. Dozens of like-minded "git off'n mah land" heroes have assembled in the Nevada desert, brandishing military-style assault weapons and looking for a fight.

the Bureau of Land Management, not wanting to kill a bunch of Americans, even those that are clearly asking for it, backed down, and stopped the confiscation of Bundy's cattle. So the right-wing terrorists are claiming victory. We should expect to see more and more of these emboldened groups of armed assholes showing up whenever they don't get their way, because now they think they can win. Just like when the Mujahadin drove the Soviets out of Afghanistan, making bin Laden and his thugs into heroic figures and attracting new adherents to the cause, more and more of gthe militia-type gun nuts are going to see the fight against the Federal Government of the USA as one that is winnable, which will probably just encourage more of this type of terrorism.


Of course, these tea-bagging terrorists are completely delusional, if they think that they would actually stand a chance against the most powerful armed forces the world has ever seen, but hell, how delusional do you have to be to believe the other shit they believe?

Like that Barack Obama favors gay marriage, abortion on demand AND the implementation of Sharia Law!

Or that Barack Obama is a weak-kneed, dithering apologizer AND an iron-fisted tyrant!

Or that the government of the State of Hawaii, the Kapi'olani Hospital, and the Honolulu newspapers all entered into a conspiracy to fake the birthplace of Barack Obama because they knew that a few decades hence, the miced-race son of a single mother with a weird, foreign-sounding name and the face of a teenager would be a formidable candidate for President.


So, yeah, this is happening now.