Okay, Who's Paying for This?

Because there's no way Pam Geller has enough money for this, right? Please, God?

These horrible, blatantly racist ads have been put up in NYC subway stations by Pam Geller and some bullshit organization she runs. They had to sue the NY transit authority to make them put up these ads. But that's got to be some pretty expensive ad-space. I hate to think that this nut is making enough money from her retarded website and frequent appearances on FOX to be able to afford this ad buy.

This woman's entire Raison d'etre is that she hates Muslims and Arabs and Arab Muslims.

How much money can you really make from a website that just every day posts "Damn Muslims, they're horrible!" every day? And how much can she be getting paid to show up on FOX every now and again?

Oh, God Damn It! Was it at least Morning Joe?

Is that why I'm not making any money on this blog? Because I don't call Muslims "animals" and "savages?"  I'm certainly willing to cal Pam Geller an animal. Not a nice animal like a baby deer or a puppy or something, maybe a loathsome serpent, or a crocodile or something? A Naked mole rat?

Yeah, that seems about right. Pamela Geller is the Naked Mole Rat  of political commentators.

Oh, God, now I'm going to get traffic from the kind of people who do Google searches for "Pam Geller + Naked."
Posted by Professor Chaos at 11:18 PM 1 comment:

Pathetic line of the Day


In 1968, France was a dangerous place to be for a 21yo American but Romney was right in the middle of it

France. In 1968. France was a dangerous place for a 21-year-old American boy? You know, if France was too dangerous for him, he could maybe have tried some other country like, Oh, I don't know, Vietnam?

It's not like anyone was forcing poor old Mitt to be in France, he was there because he was classifying himself as a missionary to avoid going to Vietnam. But I'm sure he must have had serious moral objections to serving in the war, probably.

So what was so horrible about France in the 1960's?

. . . a time that Romney once described as “tough” because the French were “not happy to see Americans, because we were in Vietnam at the time.”

Yeah, I got news for ya, Mittens, no one in any country is ever happy to see Mormons knocking at their door. 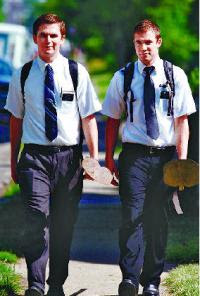 Oh, God, here they come. Quiet everyone, kill the lights!
. . . all those dying Americans were causing protests in France, and as a result, says Romney's fellow missionary Mike Bush, “There was no train service, there were no buses, no newspapers. The electricity would go off from time-to-time.”

Oh. That must have been rough!

Seriously? You're telling me that George Romney, head of American Motors and governor of Michigan didn't know how to wire money to France?  I'm sure Mitt could've taught him how to wire it to Switzerland. Or the Caymans. Or Bermuda.


Damn, CNN! You're really airing this nonsense? You do know that how ever far you bend over backwards to accommodate the right, they are never going to be your friends, right? Even if you go to these pathetic lengths, portraying a man who supported the war as long as someone else was fighting it as somehow heroic because there were protests and marches in France? You know where else there were protests and marches in 1968? EVERYWHERE! Certainly all over the US. This is what 1968 looked like in Chicago:

Well, you get the idea.

From now on, CNN, you need to run everything past Soledad O"Brien before airing it, okay?
Posted by Professor Chaos at 10:42 PM 2 comments: