Glenn Beck and Ann Coulter Might as Well Just Go Ahead and Gay-Marry Each Other!

The AFA keeps sending me things. Things like this:

Ann Coulter, Glenn Beck go AWOL in the culture war
Which is weird, because if there's one thing those two enjoy, it's a culture war. Or an actual war, as long as someone else is doing the actual fighting.

Count Ann Coulter and Glenn Beck as the latest deserters in the culture war and in the battle for sexual normalcy. They have flinched at “precisely that little point which the world and the devil....are attacking,” and so have forfeited the right to consider themselves any longer culture warriors.

So now they're going to have to consider themselves what, normal people? Cuz that ain't gonna work!

Ann Coulter is the headliner at “Homocon 2010,” a September 25 gathering of so-called gay “conservatives.”

Really "Homocon?" Is that a thing?


Um, yeah. Apparently it is:

It's apparently put on by the group "GOProud" which is an organization of gay homosexuals dedicated to supporting the party that would deny basic rights to gay homosexuals. It's kind of like a "Chickens for Colonel Sanders" sort of an outfit.

So here is what GOProud believes:

We are Republicans and conservatives who believe in limited government, individual liberty, free markets, a strong national defense and a confident foreign policy. We believe that every individual should be equal under the law.

You know, every individual except ourselves!

The so-called “gay agenda” is defined by the left through a narrow prism of legislative goals. While hate crimes and employment protections may be worthy goals, there are many other important priorities that receive little attention from the gay community. GOProud’s agenda emphasizes conservative and libertarian principles that will improve the daily lives of all Americans, but especially gay and lesbian Americans.

Really. Some may think that protecting gay folks from being beaten up and fired is maybe a worthy goal, but those people are totally gay! What's really important to the gay people is a "confident foreign policy" and "free markets!"

1 – TAX REFORM - Death tax repeal; domestic partner tax equity, and other changes to the tax code that will provide equity for gays and lesbians;

Because right now, gays and lesbians are totally getting screwed on this whole "death tax" thing. This is so much more important than hate crimes and employment protection.

Okay, the "free market" is what we have now for healthcare, so I'm not sure how that would be considered reform.

Oh, wait. That's part of the narrow prism of the left's "gay agenda." Scratch that last one!

Also, supporting conservative Republican. . . wait, something's not adding up here. Oh, that's right, we're only opposed to discrimination in the name of Allah! As long as it's done in the name of traditional family values, it's just fine with us!

So anyway, these self-loathers invited Ann Coulter to come speak at their little circle jerk and I guess she accepted, and that has apparently touched off a firestorm of ridiculous pearl-clutching outrage on the right.

Conservative speaker Ann Coulter has been asked to step down as a keynote speaker at WorldNetDaily’s “Taking America Back National Conference”.

The conference organizers said that it was Coulter’s involvement in “HOMOCON”, an event that is put on my GOProud and represents, “gay conservatives and their allies”, that let to her being booted from the program.

The CEO of WND, Joseph Farah, had a few comments to make about the situation.
“Ultimately as a matter of principle, it would not make sense for us to have Ann speak to a conference about ‘taking America back’ when she clearly does not recognize that the ideals to be espoused there simply do not include the radical and very ‘unconservative’ agenda represented by GOProud,” he said.

"Apparently," he continued," Ms. Coulter has forgotten that we hate fags!"

Although Coulter has defended her agreement with GOProud, she has announced that her speaking at the event does not interfere with her personal beliefs.
“They hired me to give a speech, so I’m giving a speech. I do it all the time,” Coulter said. “I speak to a lot of groups and do not endorse them. Giving a speech is not an endorsement of every position held by the people I’m speaking to.”

"I have no principles," she continued. "I'll take their money, make a stupid speech, then go back to calling them fags and homos as soon as the check clears.

So, anyway, that's the AFA's problem with Coulter.
What's their beef with Beck?

Glenn Beck has completely and shamelessly surrendered on the issue of gay marriage, and did so on Bill O’Reilly’s program, only the most watched cable news program in all TV land.

Beck said “we have bigger fish to fry” than protecting natural marriage, which, outside of being the bedrock and foundation of any healthy society and the cornerstone of Western civilization, is apparently not that important to Mr. Beck.

Oh, because Beck thinks that the bogeymen of his paranoid delusions are scarier than the thought of two dudes getting married. And you think that the two dudes are just the most scariest thing ever, way more than Beck's imaginary Nazis and Stalinists? Is that the problem?

Here’s hoping - and praying - that both of these two former stalwarts in the cause will come to their senses in time to return to their posts on the wall instead of giving aid and comfort to the enemy.

Um, I thought the enemy was Al Queda, not Big Gay Al. 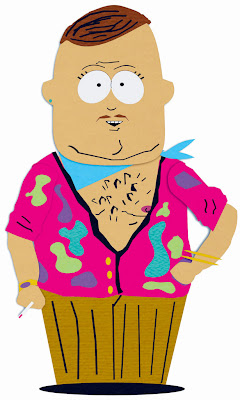 You wanna know how upset the AFA is about these two going all soft on the gay thing? Check this out:

As far as Ronald Reagan’s dictum that "[t]he person who agrees with you 80 percent of the time is a friend and an ally - not a 20 percent traitor," let’s have the average husband try that out on his wife. “Honey, I’m faithful 80% of the time. There’s no reason for you to come after me with the frying pan.”

Yeah. They just dissed Reagan. Ronald Freakin Reagan! That's like a Catholic dissing the Pope, or a Buddhist dissing Buddha. Or a communist dissing Marx. How pissy do they have to be to throw Reagan under the bus just because his "dictum" supports their not jettisoning Beck and Coulter? And it's not like Beck and Coulter are going to stop being totally horrible people.
Posted by Professor Chaos at 9:41 PM 3 comments: