The Year in TV

Have I ever mentioned that I love TV?


Because I loooooove TV. Maybe it comes from growing up without it, but I am  a TV fiend. The first thing I do when I walk into  a room is turn on the TV. Fortunately, the Missus feels the same way. Anyway. . .

I don't know why they won't let Fred Armissen be this funny on SNL. Also I don't know why Carrie Brownstein hasn't been doing comedy before this, because she is amazing.

Three comedies I just started watching that turned out to be way funnier than I expected:

1. Party Down - Such a dumb name, and also we don't have STARZ (does anyone?), but I heard some of the cast members on "Doug Loves Movies" and they were all pretty funny, and then Netflix had it available for streaming, so I checked it out. Awesome! Also, a pleasant surprise, when Jane Lynch left, I had a sad

especially since she left to be a part of that piece of shit "GLEE,"

But then Megan Mullalley replaced her.

and she's even better! She is really a terrific comic actress, she was easily the best part of Will & Grace. (We used to say that the only problems with Will & Grace  were Will and Grace)

2. Squidbillies - I don't know what ever possessed me to TIVO an episode of this ridiculous-looking cartoon, but after one episode, I was in love!

Yes, with this! Don't judge!
3. Workaholics - It's not exactly brilliant or anything, but considering that the promos made it look pretty bad, it's just a lot funnier than I expected it to be.

Show with which I am currently most obsessed: 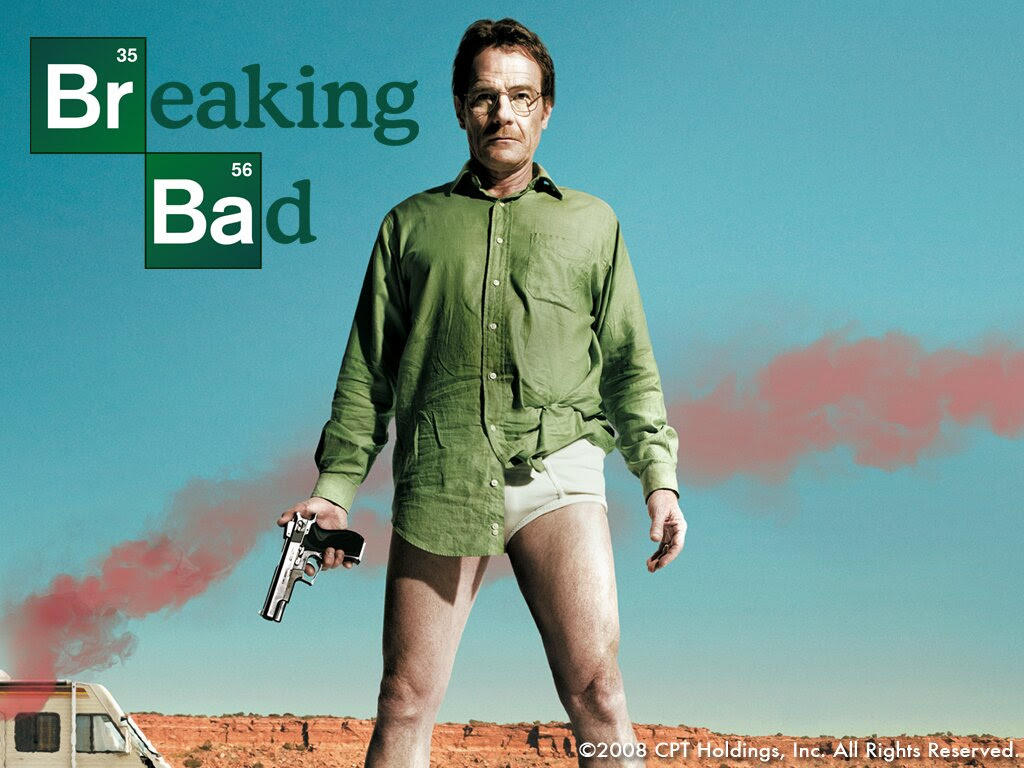 I watched the first episode when it originally came on and I really liked it, but for some reason I never set TIVO to record it and then once I had missed a couple, I figured I was too far behind to catch up. So I've just started watching Season 1 on Netflix and now I'm totally hooked. I always liked Bryan Cranston as a comic actor, but who knew he could bring this kind of intensity to a dramatic role without ever feeling like he's chewing scenery. Brilliant!

I thought they had done a really good job most of the year of building the suspense and mystery, although once we found out that Violet was dead, it kinda lost some steam. But still, the promos promised us that the "terrifying secret" would be revealed. Now, full disclosure we did have a brief power outage, so I missed about 5 minutes towards the end, but unless the reveal happened in those 5 minutes, I think they lied. Which would be fine if they were adding another layer to the mystery or whatever, but instead we got Ben and Vivien putting on this silly ghost show to scare off the new homeowners (and really, Ben, couldn't you scare the lady off without sexually assaulting her? That is not okay.) And sociopathic Tate suddenly having a hard time killing a guy if he's making eye contact, and he's only killing the guy so that the girl with whom he is in love can have a boyfriend? He doesn't even make a single attempt to win her back? That is an incredibly selfless act for a sociopath. Honestly, the whole episode just felt like a huge letdown.
Also, enough with the rubber suit.
Show that never gets old:
Project Runway
I'm a breeder, I have no interest in the world of fashion, and I generally don't care for reality shows, but I never miss an episode. Even though almost every year, someone I hate ends up winning. (not this year, I really liked Anya both as a person and a designer)


Law & Order.
How are we to live in a Universe in which there are no new episodes of Law and Order? I honestly can't remember a time when there was no Law & Order. And I know they're going to keep making SVU, but I can't imagine that show without Christopher Meloni.


It's Always Sunny in Philadelphia

It's definitely not for everyone, certainly not for the easily offended, but the cast is terrific, the writing is sharp, and somehow a show about 5 un-lovable losers  just keeps bringing the laughs. I can't explain it, but if you haven't seen it, you're missing out.


FX
The network that gave us The Shield, Rescue Me, and 30 Days is still producing some of the best original content on TV: Louie, Archer, It's Always Sunny, Justified, Sons of Anarchy. . . the big four networks wish they had shows like these.


Community and Parks and Rec
I watched the first episode of Community with high hopes, being a big fan of Joel McHale, but I wasn't impressed. Since then, I keep hearing that it's the most creative, smart comedy on television, so I'm definitely going to have to give it another chance if it's not too late already. Same with Parks and Rec. I watched it a little bit when it first came on and it just seemed like a sad rip-off of the Office with a less-funny cast. But lately It's been getting so much good buzz that I'll have to check it out again.

It has some of the cringe-inducing comedy of a "Curb Your Enthusiasm" or "Extras," but that's really just the beginning. Some of the best stuff on Louie isn't even funny. (An entire episode last year about a traumatic incident in Catholic school). Louie is like a Woody Allen movie, dealing with issues like aging, depression, the futility of love, the terror of fatherhood while finding moment of laugh-out-loud funny in there somehow. Louie C.K. is brilliant.
Worst Show:
30 Rock
Okay, sure there are worse shows than 30 Rock, but there isn't another show which started off with such high hopes and plunged so quickly into dreck. I can't even watch it anymore. They've managed to make Tracy Morgan completely un-funny and annoying. The best  episodes of the last couple years was when Tracy disappeared and Sherri Shepherd guest-starred as his estranged wife. It was great to see that the show was still capable of being funny. But even then, they insist on pushing Kenneth the page, the least funny, most irritating character to hit prime-time since the little girl robot on "Small Wonder," as a primary character. Does anyone actually like this character? Can anyone stand him? He's a horrible actor and just an absurdly unbelievable character. He's two one-dimensional to even qualify as a stereotype Southern hillbilly. (By the way, I have been to Stone Mountain, GA, where Kenneth supposedly hails from, and it is absolutely not a pig-farming backwater. It is a suburb of Atlanta, for fuck's sake)

Y  U No  leave comments anymore?
Do you have any idea how fragile my little ego is?
Posted by Professor Chaos at 5:10 PM 2 comments: