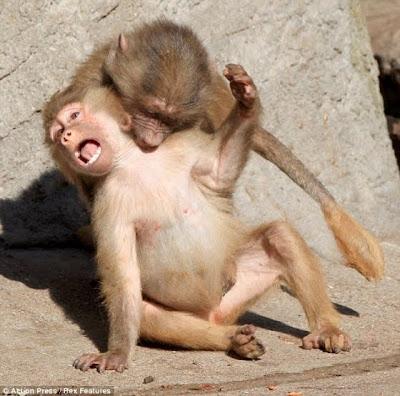 Does any other blog give you baboon horror movie re-enactments?

No. The answer is no.

You're welcome, America.
Posted by Professor Chaos at 6:01 PM No comments:

Email ThisBlogThis!Share to TwitterShare to FacebookShare to Pinterest
Labels: Hey Look, Things that Only I think are Funny

You Know What? Fuck You, Bob Dole!

This is what greeted me this morning when I opened the Op-Ed section of the Atlanta Journal-Constitution:

By Bob Dole
You know what, Bob? No.

First of all, why should we take any advice on healthcare from someone who not only opposed the creation of Medicare, but was still bragging about it in the 1990's?

No do-overs, no takie-backies, no starting anew. No. You guys had your chance. President Obama and the Democrats were dead set on making this a bi-partisan project. You guys had plenty of opportunity to put in your two cents, and God knows the Dem's were more accommodating than you had any right to expect. You could have participated in good faith, but you chose to shit all over the process, then asked for a delay so you could gin up phony controversies and disrupt town hall meetings so that the facts were shrouded in a haze of death panels and euthanasia and Nazis, and now you want to say that it's too confusing and we need to start over?

Health care reform is the No. 1 domestic priority. With all the charges and countercharges, those who will be affected, the American people, are understandably confused. Many are angry.
Whose fault is that? No one was confused until you (and I don't mean you personally, I mean the right in general) started making shit up. People are confused and angry because a bunch of fucking liars started yelling about tyranny and killing Baby Palin and Hitler and on and on. And it's only a small number of people who are confused and scared, they just happen to be the loudest. Polls still show that around 70% of Americans want a public option.

So no, Bob! We don't need to start over, you guys just need to get out of the way and let the grownups handle this. You had your chance. 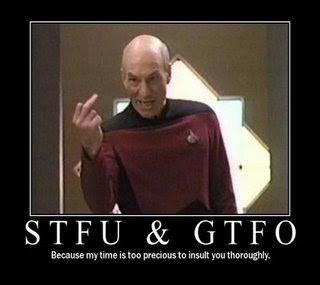