Some random things that have crossed my Twitter feed in the last few days.

The "Cradle Act" would allow new parents to use Social Security savings to pay for time off after birth/adoption. Users would then delay their retirement to pay the money back.

So. . . the Republican idea to help Americans with family issues is to . . . allow people to rob Peter to pay Paul.

And they're trotting this out like this is some fantastic innovation! Now, my fellow Americans, you can take some of the money you were counting on for retirement and spend it on the problems of today! And the best part is, you can replace the money you've taken from your retirement fund by simply continuing to work long past the age anyone should be expected to! Um, you're welcome?


Holy shit, are you serious?
That takes some fucking BALLS!

The nerve of these people, the absolute gall!

Imagine you run an organization many members of which have committed the most heinous of crimes. And this organization of yours has actively enabled those members in the commission of further crimes. And then someone mentions on tv that your organization has committed lots of horrible crimes. And you, rather than slink away in shame, decide that this is the perfect time for umbrage-taking. And you draw yourself up to your full height and exclaim "how dayuh you, suh! You have insulted my honor! I demaaaaaand satisfacttion!"

And this was literally today!


The cardinal was convicted on five counts in December, making him the most senior Catholic official — and the first bishop — to be found guilty in a criminal court for sexually abusing minors,


And these people have the temerity, the audacity to demand an apology as if mentioning that your church is a hotbed of sexual abuse is some sort of slander? Saying that the Catholic Church is responsible for the sexual assault and rape of countless minors is like saying that Bill Cosby drugged and raoed a bunch of women. The Cosby family might not like to hear that, but they can't seriously dispute that it's true. I mean, Imagine Camille Cosby demanding that someone apologize to Bill for pointing out the fact that he is a rapist.
God, NBC damn well better not apologize for this! 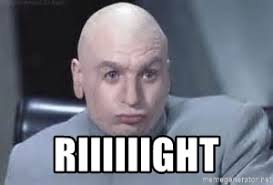 Yes, of course. I'm sure that this is exactly what's happening. Just like there was the "walk away" movement a little while back.

What, did like 50 people show up for that? None of whom were actually Democrats preparing to walk away from the party.

And there's always some  genius explaining how the black people are finally starting to realize that the real racists are the Dems and they'r all going to become Republicans and yada yada yada and oddly, none of this shit ever seems to actually pan out.


But this time. . .
This time, it makes perfect sense that Jewish Americans would flock to the party of Steve "I'm Davis Duke without the baggage" Scalise, Sebastian "I'm literally wearing a Nazi-sympathizer pin on televison" Gorka and Steve "ethno-nationalism" Basnnon. Not to mention Steve "what's wrong with white supremacism?"King and a president who thinks that there were "many fine people" in the neo-Nazi torchlight march.

But okay, I'll bite. What is "jexodus" and who is Elizabeth Pipko?

Well, sure, I mean, who wouldn't take political advice from a 23-year-old model?I mean, who has more wisdom than a 23-year-old kid whose only job requirement is to be tall and pretty? Sure, I was thinking that the Democratic Party leadership includes people like Chuck Schumer, Debbie Wasserman-Schultz, Dianne Feinstein and Adam Schiff, but if a twenty-three-year-old model says they're the anti-Semitic party, well who am I to argue?