What the hell is Limbaugh talking about?


I'll make this quick since my computer is being very uncooperative today.


I saw this a few days ago, and I'm still not sure what the hell he was trying to say. I mean, I've been turning it over in my head trying to find a way that this makes any sense. Even factoring in that Limbaugh has zero human decency, I still can't figure what his point is supposed to be. 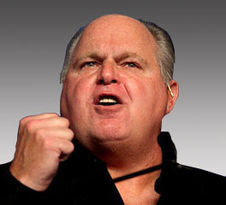 “You know what the magic word, the only thing that matters in American sexual mores today is? One thing. You can do anything, the left will promote and understand and tolerate anything, as long as there is one element. Do you know what it is? Consent. If there is consent on both or all three or all four, however many are involved in the sex act, it’s perfectly fine. Whatever it is. But if the left ever senses and smells that there’s no consent in part of the equation then here come the rape police. But consent is the magic key to the left.”


Okay, I only see two possible ways he could have meant this. First, and most horrific, is that in his fevered brain, the idea of consent, that you shouldn't fuck anyone who doesn't want you to fuck them, is some sort of hippy-dippy lefty-loosey notion that is just really out there. Which doesn't really make sense because, yeah, that's exactly how it works and everyone knows that. Consent is what differentiates between a fun evening and a horrible crime. It's the same difference between a withdrawal and a bank robbery. It's the difference between a road trip and a kidnapping, between a boxing match and assault & battery. It's not a liberal/lefty/progressive thing, it's just the definition of the word.


The other possibility I can see is less horrifying, but still awful in its own way. He may be saying that sex, at least non-marital sex, is always wrong whether it is consensual or not and that the left seems to think it's okay as long as all parties are willing participants. If sao, that's pretty rich coming from this thrice-married pill-popper who may or may not frequent the fleshpots of the third world armed with a forged prescription for Viagara. ( http://www.thesmokinggun.com/documents/crime/rush-limbaughs-dominican-stag-party )

And I really don't know what to make of the line:  But if the left ever senses and smells that there’s no consent in part of the equation then here come the rape police.

Ah, yes. The "rape police." Or, as they're more commonly referred to, the "POLICE."

Usually if you toss another word in front of the word "police," it's because you're making a joke about someone who is not actually a police. Like the "grammar police" or the "fashion police." But the rape police are the actual police. I mean, he must know that, right?

I don't know. And I don't know why I care. I just have this compulsion to try to make sense out of things. But this? This has me stumped.