If you know me at all, and you certainly do NOT!, you know I love me some TV! So when I look back at a year like 2015, I look back on it in terms of what was good and bad on the idiot box. Here are some of my observations, take them for what they are worth. (hint: not much)


Surprise of the Year For some ungodly reason, Fox seems to want to sell this as a package with "Grandfathered," a show so bad I don't even have to watch it to know how bad it is. The fact that, in the promos,  they show John Stamos repeating to himself " I'm a grandfaaa--- I'm a grandfaa--" like the Fonz trying to apologize says everything I need to know about that turd of a show.

Anyway, after seeing the paired promos for the twin "handsome middle-aged guy is funny" programs, we thought "yeah, it looks like that 'Grinder' might be okay. (It helped that they had the always hilarious Kumail Nanjiani in the ad) So we checked it out. Oh my God. This show is soooo much funnier than I was expecting.

I knew Rob Lowe was good actor. And I liked him on Parks & Rec, but he wasn't the funniest one on the show by far. But in The Grinder, he is totally hysterical playing a full-of-himself former actor who thinks his career playing a lawyer on TV qualifies him to do actual legal work. Even more surprising is Fred Savage. I haven't seen him in anything since Working in the 1990's and I had no idea what a terrific comic actor he had developed into. He and Lowe have a great chemistry and timing as do Savage and Mary "the Waitress" Elizabeth Ellis who plays Savage's wife. The supporting cast is good, especially William DeVane as Lowe and Savage's well-meaning but air-headed father.

I know, I know, everyone says Season 2 of True Detective, but I wasn't so disappointed in that one as I wasn't expecting it to be good. After all, it had Vince Vaughn in it, how good could it possibly be?

Also, just annoying in everything since "Clay Pigeons"

But I really liked the first season of Fargo. Mostly due to the great cast. Billy-Bob Thornton, of course, and also Allison Tolman in the Frances McDormand role, Martin Freeman in the William H. Macy role and Colin Hanks in a role that probably doesn't have any parallel in the original movie.

The problem with Fargo, both the movie and the TV show, is that it's based so much on the idea that people from rural Minnesota talk funny. They have those Sarah Palin accents and they say things like "aw, geez" and "Oh, heck" and Ya, sure, you-betcha!" And the idea seems to be that setting a story of murder and mayhem against that background is some sort of clever juxtaposition or something, I don't know, but this year's cast is not enough to pull off whatever it is they're going for. And I thought it would be. I mean, Ted Danson, Jean Smart, Todd from Breaking Bad. . . I had high hopes. But somehow it just didn't work.

Tough call, but I'm going with Last Man on Earth over The Grinder and Big Time in Hollywood, Florida.,, which could get the award for "funniest show that no one watched."

I've always been a big Will Forte fan (I might be the only one who liked the MacGruber movie) and of course, Kristen Schaal just kills it in every scene she's in. If you gave up after the first episode which was almost entirely just Will Forte talking to inanimate objects, give it another try. January Jones, Mary Steenburgen, Mel Rodriguez and Boris Kodjoe arrive one by one to fill out the cast. Jason Sudekis shows up in season two.

The character who is arrogant, unpleasant and rude to everyone bit still somehow loved by other characters.

I first noticed this when the Missus started watching Bones to bore herself to sleep. The main character, Dr. Brennan, aka "Bones" is a brilliant scientist and basically a jerk. And yet, the handsome FBI agent played by David Boreanaz, falls head over heels for her. The other employees at the lab all seem to consider her a dear friend, one even wants her to be maid of honor at her wedding. This seems like an unrealistic response to someone who routinely says things like "I am much smarter than you." 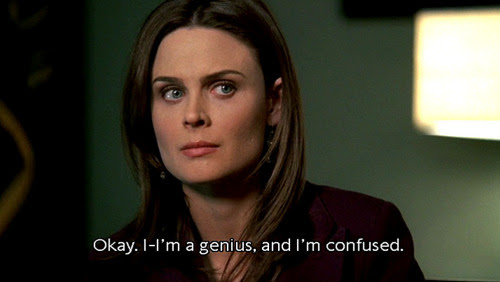 I found a few quotes online:

Booth: You're brilliant.
Brennan: Of course I am! Why is everyone always surprised by that?

Fisher: Well I feel inadequate.
Brennan: You work with me, Mr. Fisher. I would have thought you'd be used to that by now.

Caroline Julian, in an attempt to motivate Bones to return to D.C.: We need you because you're the smartest.
Bones: That's true, I am the smartest.

Booth: You know, evolution is long, long process. It takes hundreds of years.
Brennan: Thousands.
Booth: Why do you always have to correct me?
Brennan: To help you evolve.

Booth: You're a smart ass, you know that?
Brennan: Objectively I'd say I'm very smart, although it has nothing to do with my ass.


Now, I get that people would put up with her abrasive personality because, A) she's obviously on the spectrum, and b) She's a brilliant scientist who is needed to solve every murder in the DC area because the show takes place in a universe in which the FBI crime lab does not exist and a bunch of museum employees have to do all the CSI work on old bodies because no murder victim is ever found for at least six months and where else are you going to find someone who can glance at a half-buried skeleton and and say "from what I can see of the femur, the victim is a male, mid-thirties, probably caucasian. . ."  So, sure, people would put up with her. But no one would want to socialize with her, no one would want to be friends with her. certainly no one would fall in love with her, no matter how attractive you find intelligence to be.

And it's not just this one character. From what little I've seen of the Big Bang Theory, which is probably the worst show on any major network, the "Sheldon" character seem to be the same way. Rude, dismissive, arrogant, and yet. . . friends! I think he might even have a girlfriend? It's preposterous. No one would want to spend five minutes with someone like that.

Benedict Cumberbatch's Sherlock is another. He's a total ass to everyone, which is fine because he's the best solver of crimes, so who cares that he's an ass, but why do Watson and the landlady love him so? It makes no sense. We may enjoy hearing these characters insult others on tv, but if you were one of those people on the pointed end of his verbal barbs, you would certainly not enjoy his company.