No Conservative Will Ever Argue Anything Honestly

Conservatives will never, for instance, say "here's why I think that the ACA is a bad idea. Here are the flaws I see in this proposal." No, they'll say "DEATH PANELS!" and "Tyranny!" and "fascism/communism!"

But this guy takes conservative disingenuoussness, spuriousness, and general bullshittery to a whole new level.

First he starts with the straw man claim that the FBI is being tasked with investigating Brett Kavanaugh's "rudeness." Actually a straw man would be more convincing. This is like a poorly-drawn stick figure argument. And everything else in this short clip is based on this laughable ludicrous lie.

He shows a short clip of Barack Obama mentioning that the Iranian hardliners have made "common cause with the Republican caucus." He claims, both before and after the clip, that Obama "compares Republicans to the terrorists who chant death to America." Which is obviously not at all what the President said. He said they were "making common cause."  This is like if you were an animal-rights supporter and despised hunting, but you applaud the efforts of a group like "Ducks Unlimited" to preserve wetlands. You both, for very different reasons, want to preserve the environment. That doesn't make you a hunter, and it doesn't make the hunters animal rights activists. It does mean you have a common cause. Bareack Obama definitely did not say that the Republicans were like, or similar to, or analogous to Iranian hardliners. (Although he would have had a point if he would have said that.) But it soesn't matter because now we're on to Hillary Rodham Clinton's famous "deplorables" comment.

This Gun fellater makes the claim that she said "you're all deplorable," when she clearly says "about half of Trump's supporters" belong in the deplorables basket. You could call that rude, I call it generous.

Then Maxine Waters. Okay, I'll concede that what she is advocating in that clip would amount to "rudeness." I wouldn't compare it to, say, mocking a survivor of sexual assault. Or mocking a disabled reporter. Or mocking a man who spent years being held as a POW in service to his country. But sure, yelling at truly horrible people in a restaurant is technically rude.

It is a bit rich to hear the "fuck your feelings" crowd getting this worked up over "rudeness," though. 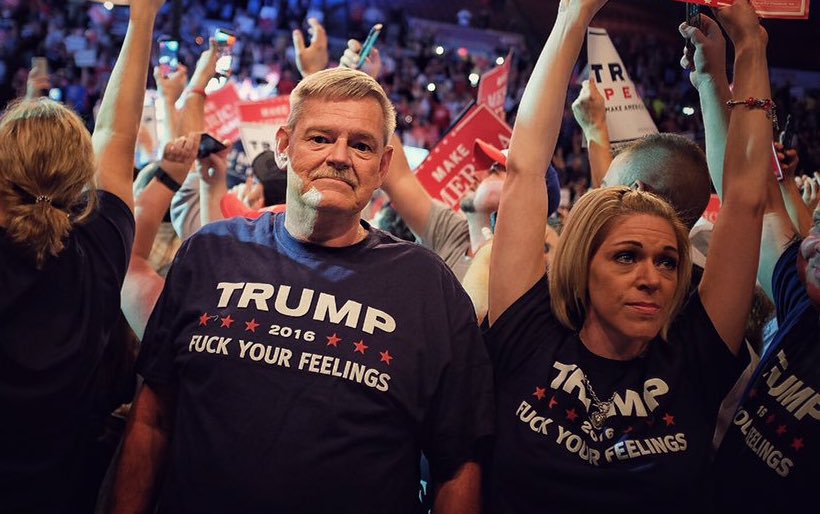 And all this nonsense. all this bullshit, all this dishonesty hinges on acceptance of the absurd premise that the Democrats want the FBI to investigate not Kavannaugh's numerous "alleged" sex crimes, but his "rudeness." It's strikingly ludicrous. But that's par for the course for conservative political "arguments."

By the way, this guy does not blink.

He blinks maybe like once a minute.
That is not normal.