Last time I said nothing is funny any more. I was wrong. This is pretty damn funny: 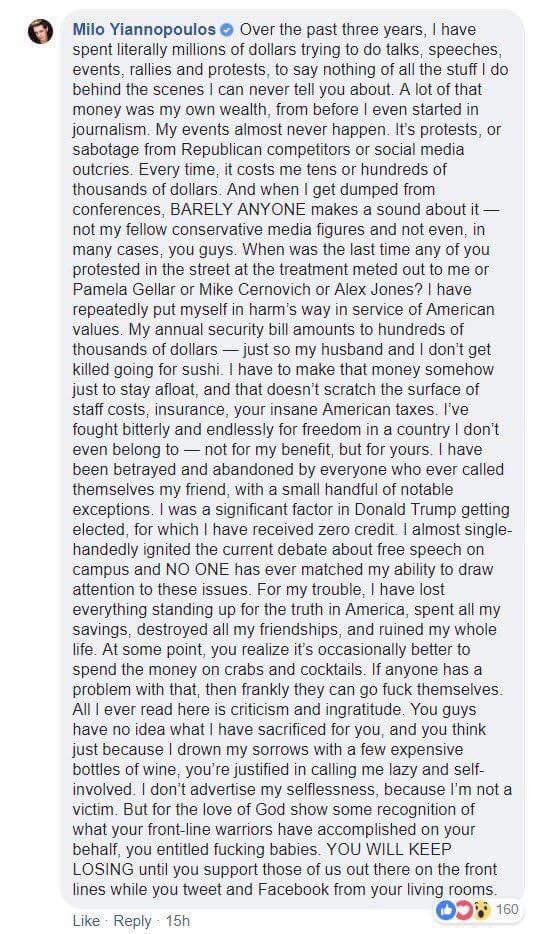 Oh my god, this is good stuff here!

Waaahhh. . . why won't anyone stick up for me when my appearances get cancelled because I am a despicable loathsome person who thinks being gay gives me license ro be a total racist? Waaaaahhhh!!!

I have put myself in harm's way um. . . somehow. . . I totally was in harm's way that time - I think you probably weren't there, but I was definitely in so much danger! And all in the service of "American values!" Not because I'm a shameless publicity whore who will do literally anything to get attention at all!

Somehow, after being a huge supporter of the fascistic syphilitic baboon in the Oval Office and defending hate speech on campus, I seem to have somehow lost a bunch of friends! So unfair!

Ahahahahahaha!!! oh, thanks Milo. I needed that.

Oh, this was pretty damn funny too:


I don't know what's funnier. The fact that this lady (And I have no idea who she is, I just saw this on Twitter) really believes, very matter-of-factly, that of course there are people out there doing witchcraft. I mean, it's obvious, duh! Or the delusions of grandeur it takes to believe that Hillary Clinton even knows who the fuck you are and is somehow so worried about what you might say or do that she casts spells on you.
I mean, she didn't cast a spell on Barack Obama in 2008. She didn't cast a spell on Bernie Sanders or Donald Trump in 2016, but some You-tube dork is apparently enough of a priority to get out the ol' eye of newt and toe of frog and cast the most weak-ass spell that doesn't even kill or disable her. How self-impressed do you have to be to think that the most famous woman in America is going to take time out of her busy day to attack you? Not any of her political opponents, not her cheating husband, but you? And how crazy do you have to be to think that Hillary Goddamm Clinton not only is aware of your existence, but her method of shutting you up is not to have you murdered Vince Foster/Seth Rich style, but to stir up a cauldron of witches brew to hex you?

(Yes, I was being sarcastic about Vince Foster and Seth Rich. No, I don't believe that Bill or Hillary have ever had anyone murdered. )