This was actually published in a real newspaper

Seriously, this was actually published in a real newspaper!


Now, what with you being a sane person and all, you're probably wondering what a second-rate pop singer has to do with a horrific rape case. Silly normal person, let Richard Cohen explain how it's all connected:


Miley Cyrus twerked. I had to look up the word since my indefatigable spell checker had no idea what I meant. . . That’s precisely what Cyrus did at the recent MTV Video Music Awards, for which she has been amply and justifiably criticized. She’s a cheap act, no doubt about it, but for me her performance was an opportunity to discuss one of the summer’s most arresting pieces of journalism — a long New Yorker account of what became known as the Steubenville Rape. Cyrus should read it.


Why would you need an "opportunity" to discuss a news story in a news paper? Has Cohen been aware of the case for the last year or so, but felt unable to discuss it in his column until he could find some sort of half-assed pop-culture tie-in?
So what take-aways does Cohen think we should get from this horrible case?

The first thing you should know about the so-called Steubenville Rape is that this was not a rape involving intercourse.

Oh my God!
So I guess it's okay that this girl was horribly sexually violated because none of the perpetrators actually stuck his penis in?  So it's  a "so-called" rape? What the fuck?

Oh, well, only two. What's everyone even so upset about?
Also, only two being convicted (convicted of RAPE by the way) does not mean only two were involved. Watch a Law & Order sometime, geez!

MORON
Then he starts talking about a New Yorker piece about the Steubenville case and kinda starts to seem like he's going to start making sense. Don't worry, it doesn't last long.
﻿

The New Yorker piece was done by Ariel Levy, a gifted writer. When I finished her story, I felt somewhat disconcerted — unhappily immersed in a teenage culture that was stupid, dirty and so incredibly and obliviously misogynistic that I felt like a visitor to a foreign country.

Okay, good. You've realized that rape culture is a thing that exists, that's the first step.

That country, such as it is, exists on the Internet — in e-mails and tweets and Facebook, which formed itself into a digital lynch mob that demanded the arrest of the innocent for a crime — gang rape — that had not been committed.


Wait, what? You were immersed in a culture of misogyny and you think that the misogynistic culture is what caused innocent young men to be charged with rape? How does that even make sense?

It also turned the victim into a reviled public figure, her name and picture (passed out, drunk) available with a Google query.

I don't think both can be true. I don't think the same societal factors that slimed the victim could also demand that the boys be punished for violating her. It's kinda gotta be one or the other.

And yet what indisputably did happen is troubling enough. A teenage girl, stone-drunk, was stripped and manhandled. She was photographed and the picture passed around. Obviously, she was sexually mistreated. And while many people knew about all of this, no one did anything about it. The girl was dehumanized.

So what's your problem with the perpetrators being arrested and convicted, exactly? And what the hell does any of this have to do with Miley? 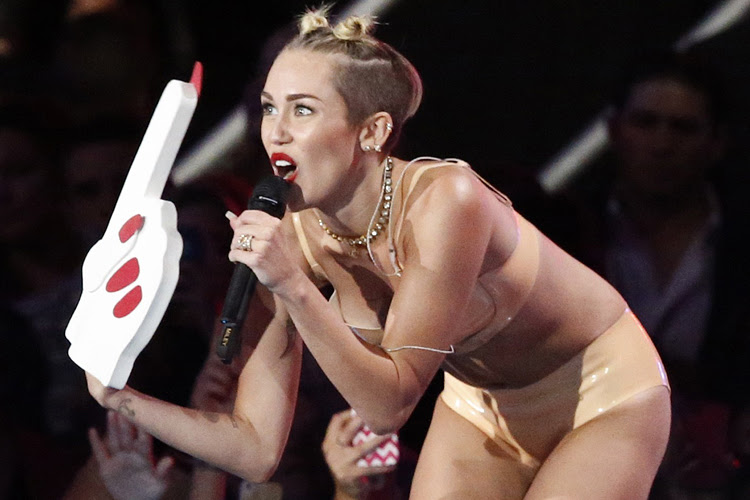 Yeah, when do we start talking about Meeee?

Well, we have to skip ahead all the way to the very last paragraph for that:


So now back to Miley Cyrus and her twerking. I run the risk of old-fogeyness for suggesting the girl’s a tasteless twit — especially that bit with the foam finger. (Look it up, if you must.) But let me also suggest that acts such as hers not only objectify women but debase them. They encourage a teenage culture that has set the women’s movement back on its heels. What is being celebrated is not sexuality but sexual exploitation, a mean casualness that deprives intimacy of all intimacy. Cyrus taught me a word. Now let me teach her one: She’s a twerk.


I've read that paragraph over and over, trying to see the connection between Miley and the Steubenville case. I don't get it.
I guess it comes down to a bit from a little earlier in the column, when Cohen refers to

. . . a teenage culture that was brutal and unfeeling, that treated the young woman as dirt. “ ‘She’s deader than O.J.’s wife. She’s deader than Caylee Anthony,’ ” one kid exulted in a YouTube posting. “ ‘They raped her harder than that cop raped Marsellus Wallace in “Pulp Fiction.”. . . She is so raped right now.’ ” Yes, I know, they were all drunk, woozy and disoriented from a tawdry cable TV and celebrity culture.

So I guess Richard Cohen is saying that women dancing suggestively on the television is what causes young men to commit rape? Because it can't possibly be their fault. There were never any bad people who committed horrible crimes before the invention of television and the young women dancing on it.  And this is honest to God printed in a real actual newspaper.