July is the Stupidest Month


at least according to the Christian Post, it is:

This is seriously their logo!
Men holding hands under a rainbow.

Although this does raise the question of who exactly is threatening the rights of the "ex-gay" community? Who is telling "ex-gay" persons that they're not allowed to live fake hetero lives? Who is saying "no, ex-gay people, you may not choose a life of solitude and celibacy, nor may you choose to live in a joyless marriage of resentment and denial, now get back to Castro Street and start having same-sex relations right this very minute!" 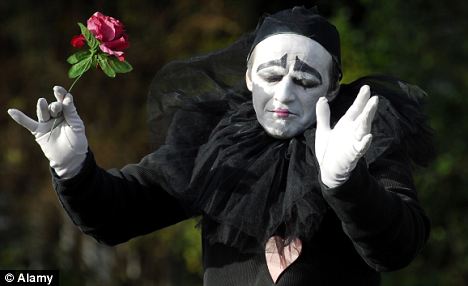 Mon Dieu, who will speak for us?
Anyway, they have apparently sent this open letter to POTUS asking for some sort of recognition. Let's have a look at it, shall we?


See, now this is just good letter-writing technique. Someone was paying attention in 5th grade grammar! First, when addressing the president, you want to include his entire full name, lest it accidentally be routed to, say assistant staffer Barack Doug Obama. Then, in addition to the street address, let your postman know that the letter is intended for "The White House," so that when he gets to 1600 Pennsylvania Ave, he doesn't accidentally deliver your letter to the Arby's in Suite B.

My God, you mean no one has returned your calls? No one from the most powerful address in the world has gotten in touch with "voice of the voiceless?" How is this possible?

Voice of the Voiceless is a public advocacy organization of ex-gays that represents tens of thousands of former homosexuals.

Also several unicorns, dozens of sasquatches, and many many little green men from Mars.

Really? Holy shit! That can't be right, can it?
Well, I Googled it and spent way too much time reading legalese, but in Judge Ross's decision denying PFOX's claim (Parents and Friends of Ex-Gays), there is indeed this line on page 12:

"As a matter of law, OHR erred in determining that ex-gays are not a protected class under the HRA."  (read it here) So I guess technically they may be right. Who knew? I had no idea that shame-based delusionals were considered a protected class.

As such, we have established July 2013 as the First Annual Ex-Gay Pride Month, and are seeking a meeting with you or a senior member of your civil rights staff to discuss a Presidential Proclamation, as you have issued in previous years, including this year, for June’s Gay Pride Month.

Again, I think you might want to give some examples of the rights of "ex-gays" being violated if you're going to make an equivilancy between your struggle and the struggle of people who actually do face discrimination on a daily basis. Maybe talk about that time that ex-gay men were forbidden to marry ex-gay women. Or that time that an "ex-gay" was turned down for a job he would have gotten if he had just stayed gay.

We would also like to discuss tolerance for the ex-gay community and how The White House can ensure equal access for ex-gays in the nation’s capital, which is the only jurisdiction that recognizes ex-gays as a legally protected class.


Please contact me at your earliest convenience at cdoyle@voiceofthevoiceless.info or by phone at 571-379-4546.

Tolerance? Equal access? Where do you not have equal access? Who is being intolerant? Who is turning you away at the door because you gotta be either gay or straight to come in here, none of this half-assed useta-be-gay stuff allowed!


Also, at your earliest convenience? Sure, in between trying to fix the economy and deal with Egypt and Syria and persecuting whistleblowers and trying to talk Republicans into not letting the federal government go into default and pretending to care about global warming and approving Keystone XL, sure, the President of the Goddamm United Fucking States of Muthafukkin America should just take a moment to pick up the phone and talk to some self-aggrandizing religious nut with a weird persecution complex! I wouldn't call you back, and I'm just some guy!


Oh, and if you want to see some real nuttery, check out Voice of the Voiceless's  website!

The mission of Voice of the Voiceless is to defend the rights of former homosexuals, individuals with unwanted same-sex attraction, and their families. We also support the faith-based community and work actively in the United States to defend the constitutional rights of all Americans to share their views of homosexuality in the public forum. We support similar international efforts and provide assistance, whenever possible, to individuals and organizations abroad who align with our mission and goals.


Which makes the whole idea of "Ex-Gay Pride" seem a bit odd. What exactly are they proud of? "Hey, I'm here, I'm not exactly queer, but I have UNWANTED Same-Sex Attraction, get used to it!"


Because former homosexuals are the last invisible minority in American culture and are increasingly subject to hostility from anti-ex-gay activists and the media at large, who is influenced heavily by the gay-activist lobby that discriminates and marginalizes former homosexuals.

Oh, yes. Obviously the media just loves the gay people. That's why there is at least one gay person with her own tv show!

At LEAST one! I lost count.
WHERE is Ex-Gay Pride? Currently, VoV plans to hold at least one event in Washington, D.C. in July to commemorate the First Annual Ex-Gay Pride Month. Because Washington, D.C. is the only jurisdiction that recognizes ex-gays as a protected class against discrimination in the United States, we believe this is a safe place to gather and celebrate free from any threat of intimidation.


Oh my God, you really need a "safe place?" Who's threatening you? You know Michele Bachmann is a goddamned Congresswoman and a recent presidential candidate and she's married to one of you!

And he is FABULOUS!﻿

And not only did that not hurt her, it's a point of fucking pride! So I really fail to see why you think that you must get to this city of refuge lest you be threatened or intimidated. By whom exactly?

Oh. Okay, they are pretty intimidating.﻿


So, anyway, the head of VOV put his e-mail address on his website in case anyone wants to help! Although, I suppose some folks might send him unpleasant comments. Gee, I sure hope that wouldn't happen.
Please e-mail cdoyle@voiceofthevoiceless.info for more details on how you can participate.