Georgia Lawmakers Illustrate Why We Can't Have Nice Things

Via the Atlanta Journal-Constitution:

Federal funds made up about $10.4 billion of state agency spending in fiscal 2008, according to an Atlanta Journal-Constitution review of budget records. Four years later, that figure was more than $12 billion, in part because the state had some leftover federal stimulus money. But the total will likely approach or top $12 billion again in the upcoming year. That’s roughly 31.6 percent of state spending, up from about 27 percent in 2008.

That's not all that surprising, given that A) Red states nearly always get more back from the Federal government than they send in*, and B) this is the state that produced Newt "king of Pork" Gingrich.

And then I said "fiscal responsibility!" Ahahahaha!!!


But here's the good part:

Well, it's nice that they are taking a principled stand. There's a certain integrity in saying "even though it will hurt my state, I still think that cutting spending is morally right, and I'm willing to make that sacrifice." Oh, wait! These are Republicans!

But lawmakers have also urged Congress to spend more on everything from Georgia reservoir construction and commuter rail to medical training, and they have approved tax maneuvers to draw down nearly $800 million a year in extra federal funding for health and nursing care.

Yes, he won running on that slogan.


“We cannot be hypocritical at the state level,” said Deal, a longtime former Congressman. “We cannot continue to bombard the people in Washington, telling them they need to cut spending, they need to reduce the burden on taxpayers in this country by reducing their expenditures, and then when something like sequestration occurs, be the first to complain we’re not receiving as much federal money."


"Oh, wait, I'm being told that that is indeed our entire business model," he did not continue. "That is actually our standard electoral strategy and the only reason we get out of bed in the morning. Please tell Mr. Koch that I'm very very sorry."


“We are basically making assumptions every year in the budget that the federal government is going to continue to carry the state of Georgia,” McKoon said. “As a conservative who wants to see Washington tighten its belt, it’s prudent as policymakers to start asking what is our contingency plan if federal funding is significantly reduced.

In other words, we want DC to stop spending all this money, but we have no idea how we're going to get along without it.

In the Autumn of 18575, Francis E. Butler was a well-known marksman who performed with various traveling variety shows. He would also go from town to town challenging the locals to a $100 bet that he could out-shoot anyone in town, a bet he rarely lost.

On Thanksgiving Day, a local hotel-owner put up the $100 and said he knew of a shootist in his town that could beat the famed Butler. When Butler showed up to the match, he found that his opponent was to be a petitie 15-year-old girl. Butler and the girl each hit 24 shots in a row before Butler finally missed. The girl never did.

Now a lot of men, especially in 1875, would have felt embarrassed, angry, or humiliated to have lost to this young lady in what was exclusively a man's sport. Butler, on the other hand, was smitten. He soon married the girl and the two began touring the country performing their sharpshooting act. The girl would take the stage name Annie Oakley, and would soon have top billing. 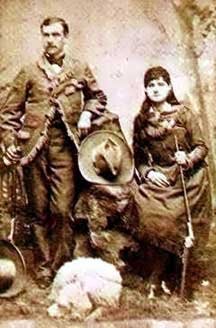 This is how a real man reacts to a kick-ass woman like Annie. Real men are not afraid of or repelled by strong, talented, successful women. Real men find those qualities appealing. Real men fall head over heels for smart, tough, independent women. Like Frank Butler did. And like I did.